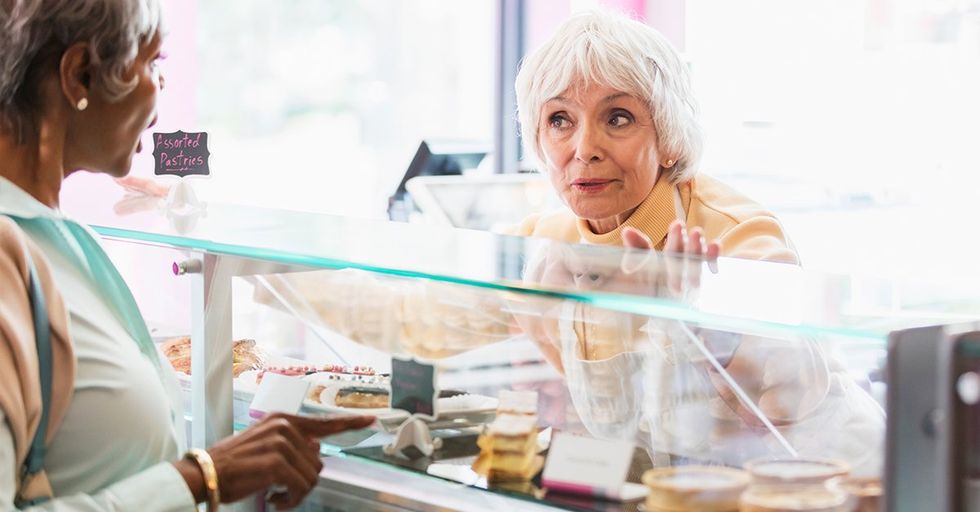 Hilariously Bizarre Photos of the Customer Being Terribly Wrong

You know how the saying goes. "The customer is always right." But if we are being honest with ourselves, we know that this concept is garbage. Customers are just people. And people are very varied. There are smart people and there are dumb people. And even the dumb people are customers.

The photos in this collection are proof — hard proof — that the customer is definitely not always right. In fact, they can be so wrong it is laughable. Hopefully, laughing is exactly what these photos will make you do. From people who don't understand what mouse pads are to ones who make insanely bad dad jokes to those who clearly mistake a light bulb for something else, this list has all manners of severely deficient customers. If you do not find these scenarios ridiculous, chances are you are the customer who is wrong, the one people take stealthy pictures of and put on the internet.

Retail and customer service employees who have to deal with customers have some of the hardest jobs in the world.

Basically, people are dumb. Customers are dumb. And they are definitely not always right.

Someone returned a Lego Set... : facepalm from facepalm

This person, um, didn't know that Legos came in pieces. That's like, the whole point of them. Who is this person?

To be fair, whoever delivered the package did adhere to the instructions. It's not really going to do any good.

Has this person never shopped in a store before? This really is amazing.

I don't know what this person thought a mousepad was, but yes, it's compatible with every computer.

A customer came into autozone asking for blinker fluid. He handed me this and said it was about half empty : funny from funny

This thing is, you don't actually fill the lightbulb with blinker fluid to make it work. It does not work that way.

This is so hilarious. How high do you think this person was when they messaged Domino's?

Not the discount you're looking for

Literally, two signs in the picture you posted say 30 percent off. Why would you think it was 60?

Do you know how big a model of Jupiter would have to be to be "life-size?" It wouldn't fit on planet Earth.

"Is this an actual leaf"

People at Chipotle finding bay leaves in their food and not knowing what bay leaves are is a whole thing, apparently. It makes me weep for humanity.

Leaking when it rains

Yes, this customer actually complained about how it leaks into their car when it rains and the sunroof is open, but it doesn't leak when the sunroof is closed.

This does not surprise me one bit. You come across the most interesting (read: infuriating) people while shopping at Whole Foods.

The people who leave questions about products on Amazon are like a whole separate species. I want to understand them.

"HOLE IN MY WALL"

WHY ARE YOU SHOOTING HOLES IN YOUR OWN WALL? THAT SEEMS LIKE A DUMB IDEA.

The radio is too loud

That was, apparently, a grown woman who didn't know you could turn down the volume on a car radio.

It seems like this retailer faces a lot of questions from stoner patrons who believe that this store would be selling weed out of a giant glass jar on the counter.

There is no arguing with a person who doesn't see logic or science. It's supremely frustrating, but there's nothing you can really do.

It's amazing that people think they can get free samples of whatever they want. Amazon definitely doesn't work like that.

OK, this one isn't terrible, but it is the eye-rolliest dad joke I have ever encountered. He really has that laminated picture in his wallet just for this bit.

I love the idea of a Little Free Library so much. It's my goal to have one someday. But I hope there's no lady who steals the books out of it multiple times. That's terrible!

This is quite an expensive bit and a commitment to letting this company know that they won't need their services anymore.

This is the most hilarious and detailed and weird description of a rattling sound. I'm glad it's immortalized on paper forever.

Hmm, it sounds an awful lot like this person complained with the goal of getting a free piece of cheesecake. I'm glad it didn't work out for them.

Unless this person is from New Jersey (where it's full service only or was until recently), they should know that you have to hold the pump to actually let gas flow. She'll figure it out eventually.

This person has to be joking, right? There's no way they think the actual scale weighs 400 lbs. Right?

Wow, this product review took a crazy turn, and now I need to learn everything about this couple.

Oh nooooo! Oh no! You don't have to wait for the date on the milk! That's the best by date, as in it's best to use it before that date. Ahhh this kills me inside.

To be clear though, I think "Just kidding don't write that" is supposed to go on the cake. This is way too confusing.

This isn't a terrible customer. This is all of us, sometimes. Share this with someone who has had to deal with customers being totally wrong!