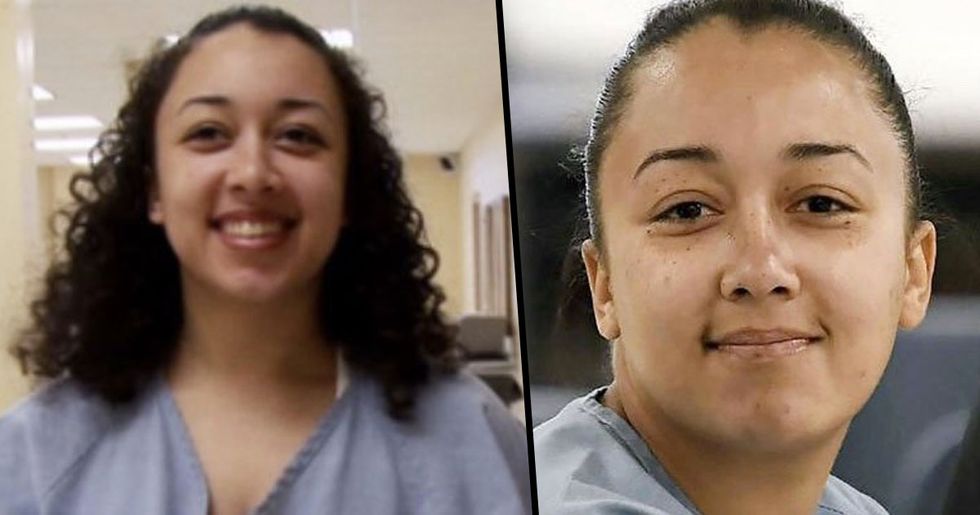 A young woman who has spent half of her life behind bars has finally been released from prison.

After much controversy, the Nashville woman, who was imprisoned at the age of sixteen back in 2004, has finally been given a second chance to start a new life. She was forced to commit one of the worst crimes imaginable after being abused and made to live in a way that no one should be made to live.

Keep scrolling to learn about the life of Cyntoia Brown and what she plans to do with her time now that she's been released from prison.

Cyntoia Brown was born in Tennessee in 1988.

She was born into a family dealing with alcohol and drug abuse and had an absent father. Her mom, Georgina Mitchell, was known to heavily drink throughout her pregnancy and she regularly used crack cocaine after the birth of Cyntoia.

Cyntoia was born with this condition thanks to her mothers' alcoholism and drug use. The condition reportedly causes "poor impulse control and a disconnect between thought and action."

She was put up for adoption after her mom proved to be unable to take care of her. Despite being placed under new care, the young teenager ran away from home in 2004.

After running away, Cyntoia's life spiraled out of control.

It has been reported that, shortly after running away, she was subjected to numerous violent crimes and experienced many rapes and assaults at a young age.

She met a man who went by the name "Kutthroat..."

In 2004, Cyntoia began living with Kutthroat in numerous hotels and hostels. Her relationship with this man was extremely abusive physically, emotionally, and sexually. It was reported that he pulled a gun on her several times and would repeatedly rape her until he eventually forced her into prostitution.

She lived under the control of this violent and unpredictable man.

Cyntoia later testified that "he would explain to me that some people were born wh*res and that I was one, and I was a sl*t, and nobody would want me but him, and the best thing I could do was just learn to be a good wh*re." She couldn't leave as Kutthroat would threaten to kill her if she did; she once passed out as he choked her so hard.

On the evening of August 6th...

Kutthroat ordered Cyntoia to go out to "get money." She met a man called Johnny Allen, a forty-three-year-old estate agent from Nashville.

According to reports, she ate dinner with him, watched some TV, and got into bed with him. He also showed the teenager his gun collection as he was a former Army sharpshooter, and this collection of firearms understandably made Cyntoia nervous.

Things began to get out of control...

Speaking to the trial court, she said: "He grabbed me in-between my legs - he just grabbed it real hard... I'm thinking he's going to hit me or do something like it..." When Allen rolled over and reached for something under the bed, Cyntoia was filled with panic and adrenaline.

She was convinced that she was going to die.

Kutthroat had supplied the young woman with a forty-caliber handgun for her own protection, so she quickly turned around, grabbed her gun, and shot Allen in the head, killing him instantly.

Despite Cyntoia being a minor at the time...

She was trialed as an adult and pleaded self-defense. Sadly, not many believed Cyntoia's plea and assumed that she killed Allen while trying to rob him, as she was found with his wallet and guns when the crime was reported.

The hardships of Cyntoia's life were outlined.

Newsweek reported that "during Brown’s trial in 2004, she testified that being beaten, choked, dragged and raped was a regular occurrence in her household. She was often threatened at gunpoint. Her legal team argued the trauma of her childhood is essentially what led her shoot Allen after engaging in intercourse with him, which he paid for."

Her circumstances weren't sympathized with.

However, it was reported that many believed that "Brown admitted to shooting Allen, and for some reason, the court system was satisfied with her admission of guilt and did not look at the abusive environment which put her in that situation."

She was sentenced to sixty years in a Tennessee prison and she was told that she wasn't eligible for parole until she had served a minimum of fifty-one years.

Her sentencing caused controversy and not just amongst the general public.

Celebrities heard about the trial and voiced their frustrations over the injustice online causing widespread media attention. Snoop Dogg compared Cyntoia's trial to that of convicted rapist, Brock Turner, who only served a short sentence of 6 months for his crimes.

7 years after her sentencing, the documentary that told Cyntoia's story was released and premiered on PBS's Independent Lens series and was later aired in the U.K by the BBC.

The documentary raised awareness of the injustice.

The New York Daily News reported that Cyntoia completed her associate's degree through Lipscomb University's in-jail program and that she would volunteer with the Juvenile Justice Association. More and more famous faces came out in support of Cyntoia, including Rihanna who shared an Instagram post captioned: #FREECYNTOIABROWN.

Cyntoia was open about feeling remorseful.

It was reported by Fox 17 News that "she did kill someone, she deeply regrets it, but she was a child and she was being exploited."

She voiced her heartbreak over Cyntoia's story and stated that she had contacted her attorney to see what could be done to get justice for the young woman. In the months following Kardashian's statement, Tennessee Governor, Bill Haslam, eventually made the decision in January 2019 to grant Cyntoia Brown clemency to be released on August the 7th 2019.

A chance for Cyntoia to rebuild her life...

"This decision comes after careful consideration of what is a tragic and complex case. Cyntoia Brown committed, by her own admission, a horrific crime at the age of 16. Yet, imposing a life sentence on a juvenile that would require her to serve at least 51 years before even being eligible for parole consideration is too harsh, especially in light of the extraordinary steps Ms. Brown has taken to rebuild her life. Transformation should be accompanied by hope. So, I am commuting Ms. Brown’s sentence, subject to certain conditions," Haslam said in a statement.

A chance to start again...

Cyntoia's lawyers released a statement on her behalf; she thanked Haslam, saying, "for your act of mercy in giving me a second chance. I will do everything I can to justify your faith in me." The conditions of her release will involve her staying on parole for ten years, having a consistent job, performing community service, and participating in regular counseling sessions.

And, today, she walks free.

Brown has had a lot of time to think about what she could do to help people in her situation.

Using her own experiences, she has vowed to help young girls and others who have found themselves in similar situations.

Instead of being angry about what happened, Brown has chosen to be courageous.

And, even though people on Twitter are still seething because of what happened to her, they can't help but commend her strength.

It may have taken an unnecessary amount of time, but at least the mistake was eventually rectified.

This is the answer to all of those exclaiming: "Why only her?"

The movement has to start somewhere, and here is the first step in the right direction.

However, some people aren't happy with the choice of words used by the media.

But who ca depend on them to give us an accurate picture? Let's just call it for what it is.

And this user is doing just that.

It's time to stop skirting around the situation. That's what allowed such an injustice to happen in the first place.

I don't think that any amount of money could ever make things okay.

But it would help Brown to get back on her feet now that she's out of prison. We wish her all the best in re-starting her life. Soon enough, she'll be helping others do the exact same thing.