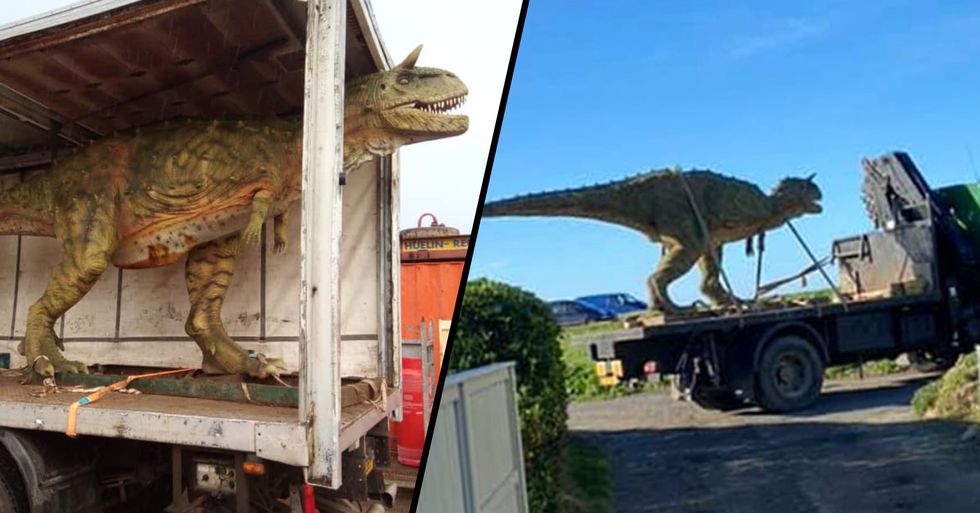 Let's admit it, we all loved dinosaurs as kids.

And many of us still adore the prehistoric creatures to this very day, and that's perfectly fine!

One dad wanted to treat his son to a large dinosaur figurine, but he was left speechless when a 6-meter long dinosaur turned up.

Who loved dinosaurs as kids?

Well, we most certainly did!

And it's not hard to see why so many people are fascinated by the prehistoric creatures that once roamed the Earth.

There's a reason why Jurrasic Park is one of the most famous movies ever...

We can't be the only ones who wanted a pet Tyrannosaurus Rex growing up... right?

But it doesn't take a genius to figure it out...

We simply cannot have dinosaurs as pets as they became extinct around 65 million years ago.

We have our make-belief dinosaurs that keep our kids entertained for hours.

One dad recently wanted to treat his son to a new dinosaur toy...

Andre Bisson is from Guernsey, an island along the English Channel, and his 4-year-old son Theo is obsessed with dinosaurs.

He became obsessed with the Carnotaurus species of dinosaur (Carnotaur for short).

The little boy wanted a Carnotaur of his own...

For months, Theo had been saying, "Daddy, I want the biggest Carnotaur you’ve ever seen." So Andre decided to take action.

Speaking in an interview with BBC Sounds, he explained that Theo’s mum led the way, sending him a link to Jersey’s Tamba Park on the neighboring island, which just so happened to be selling off its dinosaurs. "No way, I have to have this," he said.

"I phoned them straight away and I was lucky enough because they were inundated, and managed to secure him," Andre said. "I thought, ‘This’ll be the biggest dinosaur you’ll ever see.’ So he’s a full size, teenage dinosaur in age."

Andre placed the order on his very own Carnotaur...

"When I looked on the website, I thought it was about three meters long and it’d fit nicely next to the hot tub and it’d be quite fun," he explained, but he had no idea what was to come.

"It wasn’t until the boys from Channel Seaways – who did an epic job trying to get him from Jersey – told me it wouldn’t fit in their truck that I thought, ‘Wow, it must be about six meters.’ Then I knew he wouldn’t fit anywhere apart from my very small garden," Andre recalled.

The Carnotaur was named Chaz...

And he made a pretty impressive arrival!

But Chaz certainly wasn't a cheap addition to the household...

Theo now has the best pet in the world!

"Theo didn’t want to go to school as he didn’t want to leave him, he thought he’d be home alone – he wanted to take him on the yellow crane," Andre said. "He said he was hungry, so we cooked fish fingers and fed him. Theo and Chaz are best buds – he’s got a pet dinosaur!"

Now, where can we get our very own Carnotour...?

Keep scrolling to learn about the 3-year-old who wrote the adorable song, "Dinosaurs in Love"...