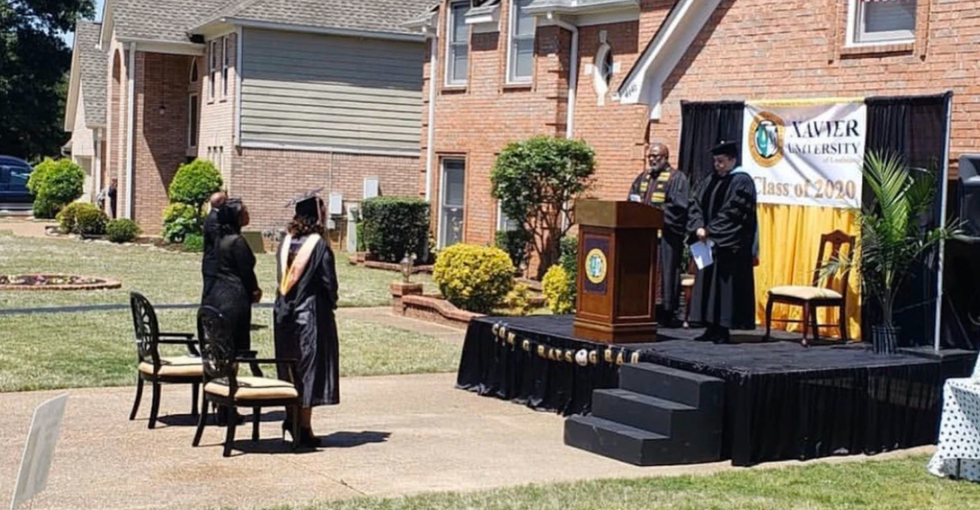 Due to the current pandemic, a lot of things have been put on hold or canceled.

So when one girl had her graduation canceled her dad took it in his own hands to give her the best day he could... from home.

Keep scrolling to see the amazing day her dad provided...

Many college students around the world have been left disappointed this year.

As after all the hard work, many won't be able to celebrate as normal.

The current pandemic has brought everything to a halt.

And that includes graduation ceremonies.

Due to social distancing, it just won't be possible this year.

A real let-down for many seniors.

Especially after the years they have spent studying to get to that day.

They really deserve a day to acknowledge their achievements.

Hopefully, they'll be able to celebrate at a later date.

And have an even bigger and better celebration.

But this thought wasn't enough for one dad.

So, he took it into his own hands.

Especially over the thought that she didn't get a traditional graduation ceremony.

After studying for 4 years at Xavier University of Louisiana.

Torrence wanted to make sure that Gabrielle's amazing achievements were acknowledged.

So he did what he could to make it happen.

Do you know what he did?

He made his own ceremony.

Speaking to FOX13 Torrence said: “After all those years, you’re going to walk across somebody’s stage if I have to build you one myself."

Made his own completely from scratch.

He turned the entire driveway into a stage.

It was kitted out with a podium, an audience, and a stage.

He remembered every little detail.

And even included a procession, invocation, national anthem, welcome, song, commencement address, and the conferring of his daughter's degree.

But Torrence didn't stop their either.

Just to make it even more real he even created his own mock-up programs.

Which jokingly claimed that Whitney Houston would be singing "The Star-Spangled Banner".

Now that really would have been Torrence pulling out all the stops.

The program read "Gabrielle graduated from Southwind High School in 2015 with the ambition to attend The Illustrious Xavier University of Louisiana to achieve a degree in Biology Pre-Medicine".

According to Blavity it continued saying "During her junior year of college, she decided to go into another direction of medicine by deciding to go into Public Health Science for Epidemiology. After all the trials and tribulations she went through, she completed college with 130 credit hours.

That must be one proud dad!

Now obviously, as you can imagine, the ceremony drew the attention from neighbors.

It's not every day you see a graduation ceremony on your neighbor's garden.

It must have been a lot of hard work for Torrence.

But he would do it all again if he had to as he said: "We love our daughter this much. Regardless of the dollar figure, what it took to pull this off. If I had to do this over again, I’d probably do it even bigger."

Nothing beats that father-daughter relationship.