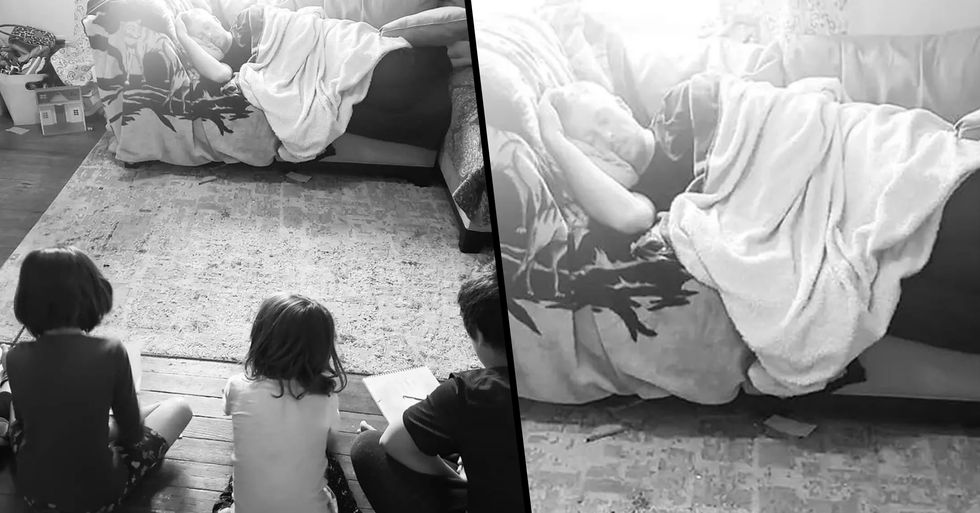 As any parent can relate, getting them essential few hours of sleep is vital.

But it's safe to say that sleep and children certainly don't go hand in hand.

But one dad came up with the genius idea to challenge his kids.

Having children is one of life's many joys...

But it's safe to say that raising a child is certainly no walk in the park.

It is certainly a testing experience.

Raising a child means teaching them everything they need to know to be prepared for life, and this often doesn't leave much time for sleep.

Sleep is a precious thing for parents...

And especially with young children, it's something they don't get much of.

Whether that's from a screaming baby at 3 am or 4 excitable children waking up at the crack of dawn... it's exhausting bringing up young children.

One father recently had an amazing tactic to tackle the sleepless nights...

Michael Weber Jr, who is from Colorado, has 4 children with his wife, Monica.

Monica was out shopping one day...

Which left Michael at home with his 4 lovely but very energetic kids.

But when Monica came home...

She couldn't quite believe what she saw.

"'I'll keep the kids so you can grocery shop in peace'....then I come home to this," she wrote.

Michael is seen sleeping soundly on the couch...

And the kids are all sat eagerly facing at him with their drawing pads and pencils.

It was all in the name of realism art...

"I'm pretty sure he's the most brilliant man I've ever known. He has them doing 'realism art' while he 'poses' AKA naps. The winner gets a chocolate, but let's be honest, @michael.w.weberjr is the one winning lmao. Nice one Michael, nice one!" she wrote of her husband fondly.

One woman wrote to her partner, "When you ask how come our son always behaves for me but not for you... this is the kinda s**t I'm pulling."

The trick clearly worked a charm...

"Wow my kids would totally fall for this and sit there for hours," another impressed parent wrote.

"This guy has blocked fatherhood," another wrote.

For more incredible parenting hacks, keep scrolling to learn about the mom who tricked her kids into thinking their medicine was unicorn potion...