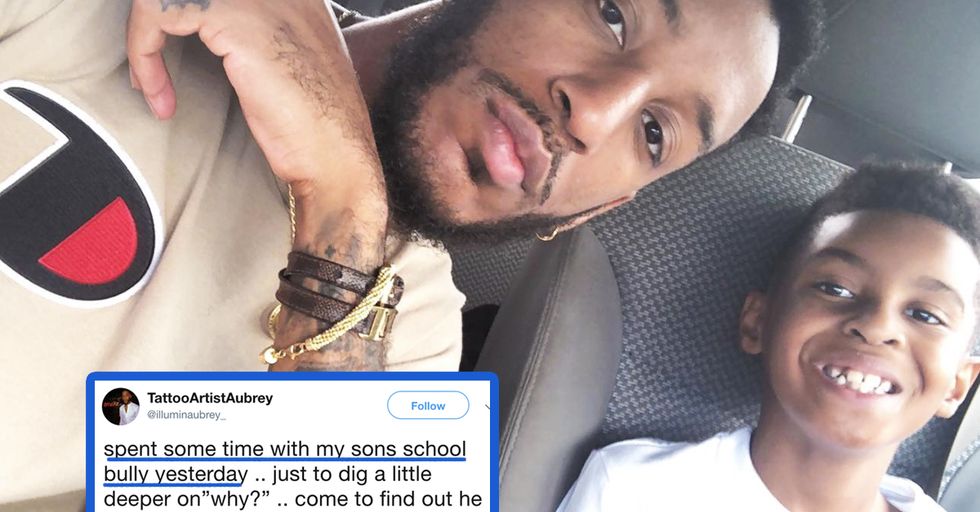 Bullies: they are everywhere, they can be relentless, they can be downright cruel, but they can also be misunderstood. It's hard to justify why bullies do what they do, or why they feel the need to be so mean to others. But this story below is about to teach us a few things about having kindness and love towards those who we think may not deserve it.

A father found out his son was being bullied at school and decided to confront the bully about his actions. What he found out shocked him, his son and the internet. It turns out the bully was homeless and was also being made fun of because he did not have clean clothes. The father went above and beyond what you can imagine, and so did the internet after finding out about this boy.

Get your tissues ready. This one is going to hit you right in the feels.

This is Aubrey. He's a father of 4 and a tattoo artist in Houston who does some pretty amazing work. A few recent posts of his blew up on the Internet, but as you might think, they're not over his incredible inking skills.

Aubrey found out that his son, Jordan, was being bullied at school. The bully had taken his sons' phone and not returned it.

There was no help from the school.

Aubrey said he reached out to the school multiple times about the incident, but they didn't do much, writing in an Instagram caption that "(yo)u know that never gets far." As a parent, it can be frustrating to reach out to the school for help, and nothing gets done.

Aubrey decided to take matters into his own hands by approaching the bully after school to get his sons' phone back.

Aubrey told his son to keep his cool.

"It was hard not to tell my son not to whoop the boy's butt especially after he stole my son's phone ... but I told him, keep your cool and let God work," Aubrey wrote in his Instagram caption.

"I taught my son that a war isn’t always won with your hands," he continued on Instagram. This man should write a book.

End of the story, right?

Aubrey concluded the story by saying, "I’m glad he learned to just listen instead of acting out...extremely proud." We've got a proud dad, a retrieved phone and the bully got confronted. That's the end, right?

What would you do?

Many people would have stopped the story there and felt satisfied as if justice was served. What more needs to be done?

Aubrey wanted to know more about Tamarion, the boy who was bullying his son. "I decided to spend some time with my son's school bully yesterday," wrote Aubrey in another Instagram caption, "just to dig a little deeper on 'why?'"

But, there's more to the story.

"Come to find out he was being bullied for not having clean clothes and clean shoes," Aubrey continued. "Once again I asked 'why?'... just to find out that his family had fallen on hard times and is currently homeless." It was a shock for him and for all who were reading along.

He began to learn the bully's backstory.

"It started to make perfect sense...we have no clue what these children are going thru these days because a lot of us just don’t care...and this is not an uncommon story for a lot of people," Aubrey went on to explain. He detailed the rest of the story on his Instagram, posting a series of photos and videos of him with Tamarion and Jordan.

Aubrey went above and beyond.

Aubrey took the boy shopping, got him some new clothes and new shoes.

He taught his son's bully a priceless life lesson.

Not only did he get new clothes, but Aubrey wanted to teach him some things as well. "Integrity. Morals. Confidence. And other things that consist of going from a troubled youth to a great man," Aubrey wrote. You can't put a price on those things.

Amazing morals from the outside to the inside.

You can hear Aubrey in the video saying "Put your shoulders back, stand like you have some pride!" It's easy to notice that the boy was apprehensive towards Aubrey's kindness and support. He seems like a pretty shy kid, but once you seem him laugh and smile, it's hard to imagine him as a bully at all.

Let's talk about it:

Towards the end of the Instagram video, you see a clip of Aubrey's son sitting across the table from his bully. Neither of them are looking at each other or saying anything until Aubrey speaks up and says, "Speak your mind, son. This is  a meeting, we're having a meeting."

New shoes, new clothes, new confidence and now some good old fashioned conflict resolution? This truly is one of the most beautiful stories.

The day ended with Aubrey's son and his new friend playing video games together. Aubrey realized he became a mentor for Tamarion.

There was an outpour of happy responses online.

Aubrey shared the story on Twitter and Instagram with his followers. The responses were filled with both love and support.

An act out of love.

Overwhelming love was filling the timeline as so many people shared their support and amazement because of what had just happened.

Propped up, not punished.

@illuminaubrey_ SEW INTO HIS LIFE! He needed to be propped up not punished. He needed to unpack his burdens and you… https://t.co/WWV8IzceAH
— PlantGod (@PlantGod)1539867796.0

This man commented saying propping this boy up is better than punishing him, or putting him down like others might have done. Responding with love and a space for him to share his story created a milestone for both of those young men and taught them a lesson that could shape their worldview as they grow up.

This is a lesson for all parents.

Other parents responded, some admitting that helping out the kid who is hurting your child would be a very difficult thing to do. It's true, it would be no easy task. But as we can see, it is absolutely worth it.

@Askalaunad @illuminaubrey_ @Kelisxoxo my thought too I'm a parent and sadly I never would have thought to approach… https://t.co/mvfueMd6y8
— Lisa (@Lisa)1539876341.0

People's perspectives were changed for the better because of Aubrey's actions. It gave a lot of people a new look on bullies and how reaching out and hearing their side can be an opportunity to spread kindness instead of punishment.

His act of kindness will have a generational impact.

This guy summed it up pretty well; kindness can have a lifelong impact on someone.

There's a GoFundMe for Tamarion and his family.

Somebody suggested I should make his family a gofund me .. something to help them get on their feet . They are curr… https://t.co/NTehK1XC2A
— TattooArtistAubrey (@TattooArtistAubrey)1539818929.0

A heaping portion of Aubrey's followers wanted to help this boy and his family financially and donate to show some love. Aubrey set up a GoFundMe page to support Tamarion. The goal was to raise $7,000.

Generosity for the win!

Thank all you for the recognition on another scale .. i feel like a beam of light from heaven has hit me .. I’m… https://t.co/fQYmItLyz8
— TattooArtistAubrey (@TattooArtistAubrey)1539926657.0

A local news station interviewed Aubrey and showed the boys playing video games together. Aubrey said in an Instagram caption that he "was definitely trynna hold back tears at this moment .. can’t explain the response man...simply amazing...the recognition. The inspiration. The change..."

What a proud dad.

Aubrey is proud of his son and his new friend for overcoming this conflict and being open to resolving it by listening and responding with kindness.

What a positive influence!

This is the kind of stuff I want to see on my evening news. Making my heart all warm and fuzzy.

Happy tears, all around.

Kindness wins! This is a story we can all learn from and can hopefully pass onto the next generation.

These boys might not know it yet, but they learned an incredibly valuable lesson at a young age.

A lot of Twitter followers responded with how this situation has the potential to create a really beautiful and lifelong friendship between the two boys.

@illuminaubrey_ This is so real and shows that hurt people hurt people. His family is struggling and he was taking… https://t.co/iaW8T5MNth
— ᏦℰℕⅅℛᎯ (@ᏦℰℕⅅℛᎯ)1539831312.0

This is some serious truth. The hurt that Tamarion was feeling was valid, but it goes to show that they can easily take their anger out on others unless someone breaks this cycle.

It's a lesson for all.

Wow man .. who would have ever thought ... It was a learning process for me as well I’m just glad it touched so m… https://t.co/zaORPSOXct
— TattooArtistAubrey (@TattooArtistAubrey)1539887322.0

Parents, kids, the internet, the bully and the bullied all benefit from this lesson. Aubrey was overwhelmed by the response from the internet and never knew that his one small decision would so positively impact other people.

Aubrey realized the large impact he had not only on his son but for all those in the black community.

Kill them with kindness!

Kindness goes a lot further than we may ever know. Share this wonderful story with your friends to inspire everyone you know to spread love and joy.