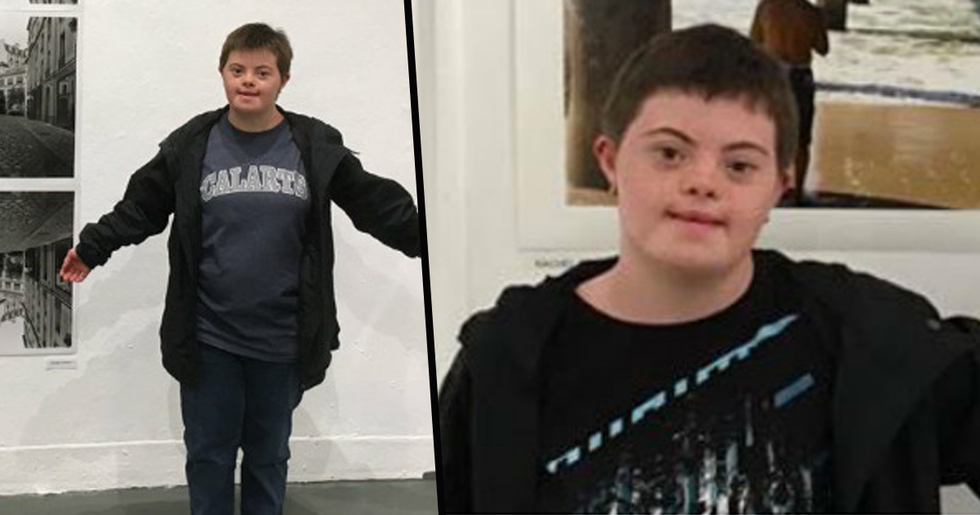 Down syndrome is still a term met with unjustified misconceptions. Thousands of people are living and thriving with the condition, and it's time to break the stigma once and for all.

That's what one dad's mission has been ever since his daughter was born with the genetic disorder, and now she has proved all the naysayers wrong by doing something incredible.

Keep scrolling for his viral tweet, and the heartwarming comments that followed...

Down syndrome is a genetic disorder that affects many people around the world...

But what exactly causes Down syndrome?

Down syndrome occurs when an extra copy of a chromosome is present at the time of conception... Specifically, a full or partial copy of chromosome 21.

According to the Centers for Disease Control and Prevention, every year in the United States, around six-thousand babies are born with Down syndrome, equating to around 1 in every 700 babies born.

Some people with Down syndrome may experience additional medical issues as a result of the extra chromosome.

Heart, intestinal, ear, nose, throat, or thyroid issues can come hand in hand with someone who lives with Down syndrome.

But many people with the condition can go on to live full, independent lives...

These shouldn’t be controversial statements but we still live in a world that is actively attempting to eradicate t… https://t.co/kIC3UpCL1s
— Jenna (@Jenna)1584797202.0

It affects people differently and at varying scales. Some people will need more regular care whereas others run their own houses and have jobs.

One of the main ones being that someone living with Down syndrome is incapable of living an independent life with their own family - something which is completely false.

And the world isn't short of people determined to prove kids with Down syndrome can do anything they set their mind to... including graduate college.

Scenes from a virtual graduation: “It’s not the container that makes us.” “Scientists create knowledge, while art… https://t.co/0kFLtFwzJg
— Jay Handlin (@Jay Handlin)1589600784.0

One "fierce" dad's post has gone viral after his daughter achieved something incredible, inspiring other parents to open up about their stories...

There’s nothing more rewarding for a parent than seeing their child doing great things in life...

@jayhandlin @bigheadtaco @CalArts Rachel was in my first lighting class I taught at calarts, im so happy to have be… https://t.co/tTD809xUJF
— Rafael Hernandez (@Rafael Hernandez)1589743819.0

And achieving their academic goals is one of the biggest challenges.

Sadly, graduation ceremonies everywhere have been canceled due to the ongoing pandemic, although nothing could stop parents from celebrating their kids’ success.

Some have even gone all out to replicate graduation ceremonies at home.

Let’s not forget those who take to social media to acknowledge their kids’ achievements...

Some even go viral for it!

And that's exactly what happened to one dad after his post sparked thousands of responses...

Jay Handlin's daughter Rachel has just earned a Bachelor of Fine Arts degree in Photography and Media from California Institute of the Arts.

And he just couldn't wait to announce the news for the whole world to see...

The tweet, which he posted on Saturday, read: “I am officially the proudest father on the planet." It has already gained over 220k likes and 19k retweets.

Rachel has triumphed in the face of adversity...

In spite of having Down syndrome, she has achieved her goals, proving the stigma behind the syndrome totally wrong...

Only one person with Down syndrome in a million graduates college, according to the Pediatric Therapy Network.

Jay, the disability/inclusion zealot, has been sharing Rachel's uni progress, with posts showcasing her photography talent.

And people have reacted in the best way...

It clearly struck a cord with parents.

And their comments say it all...

@jayhandlin @CalArts You deserve the title as she would not be what she is without your love, support and encouragm… https://t.co/KM7P2cqDvA
— Peter Hallinan (@Peter Hallinan)1589672406.0

I'm not crying, you're crying!

Some parents even shared photos of their own kids.

With the hopes that Jay's post will inspire them.

The comments section quickly became the most wholesome place on Twitter...

Everyone was thrilled with the passion and motivation Rachel showed to achieving her dreams...

This is why it's so important.

Milestones like this help pave the way for future generations so that their path is a little easier than the last.

There wasn't one dry eye in sight.

@theirishfor @jayhandlin @CalArts The one thing I know for sure with Down's kids is that they are far more successf… https://t.co/bHrjncTMK8
— Dusty Knuckles (@Dusty Knuckles)1589758837.0

Keep scrolling to find out why this single man adopted a girl with Down Syndrome...
40%