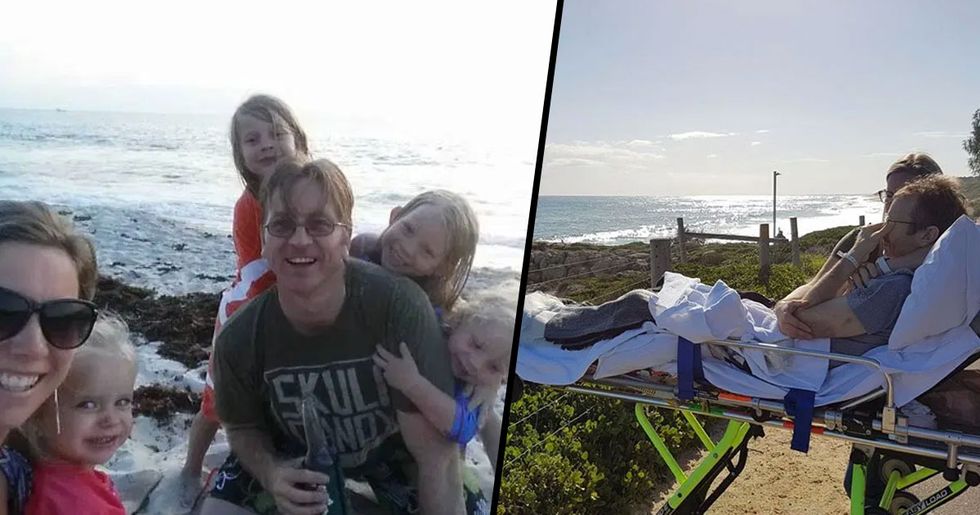 Every family has their favorite place. Whether it's the local park that you watched your kids play soccer in for the first time, the sunny beach resort that you always return to that made for the perfect getaway, or even just the back yard which has been host to countless family BBQ's and many, many laughs.

For the Shaw family in Perth, Australia, that treasured place is Burns Beach. And it's somewhere that father-of-4, Chris Shaw, visited for the last time on August 15 last year, after a long fight with cancer.

On the way to being transported to palliative care, "selfless" paramedics took a detour and allowed Chris to fulfill his final wish - to visit his favorite place, where he'd shared many happy memories with his family, for a final time.

Keep scrolling to watch the heartbreaking moment that a sobbing Chris went to his beloved beach one last time.

Chris Shaw was a dedicated father-of-4.

The dad, from Currambine in Perth, was a father to four young kids and a husband to wife, Kylie. Described as "loving, caring and thoughtful," he was a dedicated family man.

The family's lives were turned upside down when Chris was diagnosed with cancer.

Devastatingly, on Monday 19th June 2017, Chris was diagnosed with an aggressive form of stomach cancer called "adenocarcinoma of the stomach."

Not going down without a fight, the dad-of-four underwent seven rounds of chemotherapy, intensive radiation, and major surgery, including a surgery on October 2017, just a day before his forty-fifth birthday, in which he had his entire stomach and two inches of his esophagus removed.

At first, there was a glimmer of hope for the family.

Following a series of brutal operations, with one leaving him with a twisted bowel and triple internal hernia, scans showed that there was no cancer.

However, tragically, the disease returned.

Despite a brief period of remission, the cancer heartbreakingly came back and, this time, had spread to his bones.

Devastatingly, it was incurable.

Doctors told him that he had between 3 days and 1 week to live, as the cancer was far more aggressive this time around.

After having twenty-five blood transfusions, Chris lived beyond expectations, but, 4 weeks later, on August 15 last year, according to his wife, he decided that it was time to head home and receive palliative care after a long, fourteen-month battle.

However, while transporting him home to live out his final days, the paramedics took a detour to grant him his final wish.

Chris wanted to see the ocean one last time at his beloved Burns Beach, one of his favorite places to go with his family.

The family had many happy times at the beach.

Located in Perth, the picturesque beach has white sands and limestone cliffs and had long been a favorite destination for the family.

And Chris wanted to see it one final time before he passed away.

This heartbreaking photo shows a tearful Chris outside the ambulance and, wiping tears from his face, having a final moment at the beach he treasured so much. “Seeing the ocean, feeling the sun, the breeze, nothing would be able to replace that ever," his wife said.

Sadly, Chris passed away soon after.

Over a year on from his death, the family wanted to thank the "selfless" paramedics for granting him his last wish.

His wife recalled ambulance paramedics' “gesture" that allowed her husband to go out in the “fresh air for 20 minutes." She told Channel 7 News that the paramedics, “were our angels for the day. They really did become our angels."

On the anniversary of his passing, Chris' family met with the St John paramedics, for the first time since he died.

Jesse Roulston and Jade McGlew were the 2 paramedics who granted Chris his final wish.

Chris' wife also took to her Facebook page to thank the pair.

In a moving post, Kylie Shaw wrote: “I’m hoping in some small way… Jade and Jesse now know how much that meant to Chris to feel the sun and breeze on his body, hear the ocean’s crash and just feel normal at his favorite beach for 20 minutes. “RIP Shawry – we love and miss you every day!"

Through the Facebook group, the family is aiming to raise awareness for stomach cancer.

As part of Chris' bucket list, he wanted awareness to be raised about the illness, as well as more publicity to be created around it. His wife said that is was now getting his wish by having publicity about the disease in the media. Another life tragically cut short by the horrendous illness. RIP Chris.