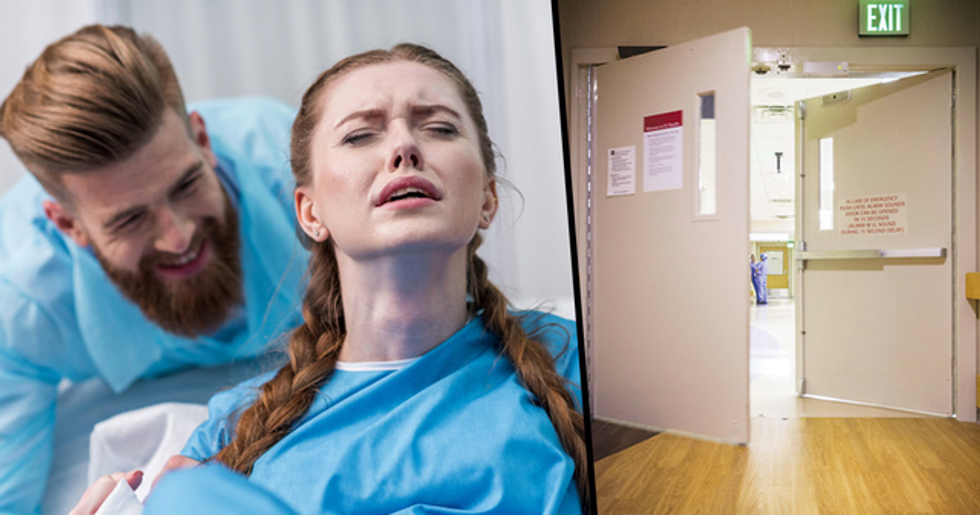 Giving birth - it isn't the most comfortable of situations, is it?

For the moms... well, it's kind of obvious. Sitting through hours (and sometimes days, for the unfortunate ones...) of agonizing contractions, to having to push out a watermelon-sized baby from your nether-regions will never be a walk in the park.

As for the dads? Needless to say, they have it pretty easy in comparison. They can sit back, relax, and wait for their new baby to enter the world, with absolutely no pain or suffering. All they need to do is not offend anyone. Sounds relatively straight forward, right?

One excitable new dad just couldn't help himself. He made such an offensive joke while his wife was in labor that the nurse had to kick him out of the delivery room. Yeah, it was that bad.

Warning: This article gets crude.

Giving birth is a momentous occasion.

Welcoming a little one into the world is a life-changing moment for new parents, to say the least.

It can be a significant bonding experience for the parents.

The whole experience is a magical one for the mom and dad to share together as a couple.

Dads are often left in charge of comforting and supporting the mom through her labor.

Whether it be foot massages, back-rubs, an endless supply of snacks, or just telling them how great they look, there's an array of things that dads can do to make the labor just that little bit easier.

Some dads use comedy to break the tension.

Cracking a joke is always an ice-breaker, right? Things can get heated during labor (obviously), so a few funny one-liners may diffuse the tension a little bit.

One thing to bear in mind though - the jokes actually have to be funny.

No one likes a bad joke. Whether they're rude, boring, or just downright offensive, a lousy joke can ruin any situation - childbirth being one of them.

And there's a time and a place for everything...

When cracking a joke, it's probably wise to assess the situation and context that you are in before speaking... especially when your wife is in the process of squeezing out a baby. Well, this is something that one new dad forgot to do.

The unnamed man took to the internet to tell his story...

In a Reddit post, the new dad, who is thought to be from the UK, explained what had happened in the delivery room, and asked people whether he, or the disgruntled nurse, was in the wrong.

Because, apparently, it wasn't his fault.

The new dad remained adamant that his joke wasn't offensive enough to be booted out of the delivery room, and that the nurse, who he referred to as a "joyless hag," simply overreacted.

And his story goes a little something like this...

Not wasting any time, the man got stuck straight in: "My wife gave birth to our first child 3 days ago and in the delivery room I made a few lighthearted comments which my wife laughed at, but the joyless hag of a nurse lost her s*** and kicked me out of the room".

Seems a bit harsh, doesn't it?

He apparently tried to diffuse the situation before he was kicked out: "I calmly tried to placate the demented old boiler by explaining she has no right to be offended on other peoples behalf, but that just made her worse." Though "demented old boiler" is a fantastically imaginative insult, to say the least...

His wife was apparently left unoffended by the joke.

And it's her feelings that matter the most, right? He explained, "My wife thinks the whole situation was hilarious but considering the amount of money I pay for private health care instead of playing Russian roulette with the NHS, I am 50/50 about laughing it off or reporting the miserable old bag".

How bad could this joke have been?!

The man talked through just how the series of events unraveled. Writing on Reddit, he unveiled the first incriminating joke: "Wife: "how does it look?' Me: "I feel like I'm watching my favorite restaurant burning down'". Okay, that one made us laugh a little...

All funny and lighthearted so far.

Nothing too outrageous just yet. Though he admits that the nurse "rolled her eyes" and "grumbled" at the gag. But hey, there's no pleasing everyone, is there?

His wife went on to safely give birth to their first son.

Following the safe delivery of their son, his wife, unfortunately, suffered tearing. So the doctor informed the couple that he would have to "put in 2 or 3 stitches".

Regarding the stitches, the man then asked, "Would you mind putting in a few extra?" Not cool.

"Fat old nurse goes bats***, starts ranting and demands I leave the room, I try to reason with her and she just started shrieking". He even noticed the male doctor "giggle" before "quickly looking at the floor".

Having a group of men joke about the trauma of childbirth is slightly irritating, isn't it?

Though it's important to note that his wife apparently laughed at the joke.

At the end of his post, he explained, "Me and my wife have a very similar sense of humor and she was not in the least bit offended by what I said, did that nurse have the right to be offended on behalf of my wife?".

Other Reddit users were quick to slam the guy for his lousy joke.

Over 400 people responded to the post, and they weren't sympathetic, to say the least. One user wrote, "His whole argument is resting on 'my wife doesn't see a problem with it', but like... ok cool, there's three other professionals who have your wife and baby's lives in their hands. He's being a huge idiot by engaging in behavior he can see is triggering the people responsible for delivering his child".

Another user wasn't impressed with his abhorrent sexism.

They wrote, "Sorry, but yeah, you are the a**hole here. Yes, the nurse CAN be p***ed off about the joke. It's her f***ing job to deal with a woman in a VERY vulnerable moment. If you just do a quick Google search you'll find out the obstetric violence is a real thing, and that 'joke' about putting in extra stitches happened to a lot of women in the hands of very sexist male doctors".

Childbirth is an extremely traumatic experience for any woman, so keep the crude jokes to a minimum. To all the expectant-fathers out there: Don't say anything stupid. And don't make a joke about your wife's vagina. Be supportive and say all the things your wife wants to hear. Women go through hell and back giving birth, and all sorts of embarrassing and humiliating things can happen. Take this woman, who's childbirth was a whole new level of messy. We doubt there were any jokes in this delivery room...