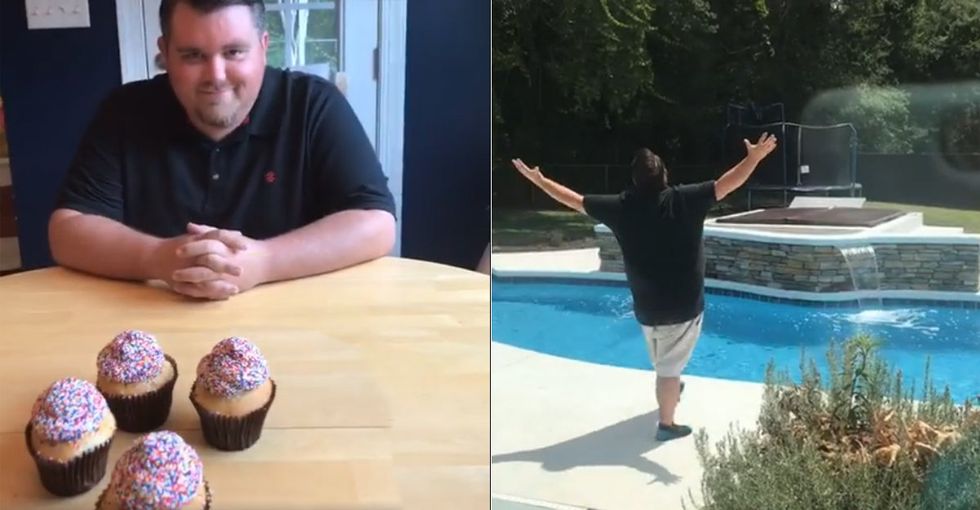 I have five kids, and I'm about to go out on a limb and tell you one of the biggest parenting secrets that nobody else seems to want to say out loud. Are you ready? Here it is.

Before their baby is born, plenty of moms and dads really, deeply, fervently care about the baby's gender. Like, a lot.

I mean, whenever someone asks, we always repeat the universal mantra of expecting parents, that "Whether it's a boy or a girl, we just want him or her to be healthy," and that's totally true. Because duh, why wouldn't you want that?

But sometimes, for all sorts of reasons, parents are secretly hoping for one or the other.

We live in a gender-obsessed society.

Like all societies, we have a way of projecting our obsessions onto people and things that don't know any better. In this case, those little people would be babies and pregnant parents-to-be.

Not content to stop there, we tend to project gender on just about everything, as you can see here.

Does a male dog need to be decked out in menswear? Probably not, but that hasn't stopped people from doing it anyway for a laugh or whatever else compels them.

We also put genders on cars in movies, which speaks to just how gender-obsessed we can get about even inanimate objects.

Ever notice how cars are always women? "She's acting up on me," Sshe's out of gas," etc.  Except in the Cars universe, of course, where the hot rods are male, in keeping with gender roles.

This idea extends to the phenomenon of the "gender reveal party," which have become quite the to-do in recent years.

Soon-to-be parents love any excuse to party, and that includes the revelation of their unborn child's sex. They save up the big moment for their friends, then share the moment on social media of all sorts.

Take Josh Baston, for example, who recently sat down at his kitchen table for a gender reveal party...with his four daughters. Yeah, you heard me — FOUR DAUGHTERS.

Say what you want about "nature taking its course" and "just wanting the baby to be healthy," but I think we can all agree that it's perfectly understandable if Baston were, deep down, hoping that his wife's fifth pregnancy would maybe add a son to the mix. Kudos to him, though, because he keeps a straight face while his wife, Christine Baston, records a Facebook Live video of the girls predicting their new sibling's gender and then slowly, oh so painfully slowly, nibbling their gigantic cupcakes to reveal either pink or blue icing inside.

The suspense builds for purposes of showmanship and spectacle.

Everyone who makes a gender reveal video thinks they're Alfred Hitchcock, and they all seem to act accordingly in these admittedly dramatic videos!

And this particular video is no different

If your nerves can stand it, give it a watch. These should REALLY only be nerve-wracking for friends and family, but they manage to get the best of even strangers during the big build-up.

I bet by now you can guess the results of this gender reveal, but I bet you can't guess what Dad does next!

Just in case you're concerned his reaction means he isn't excited about being a girl-dad (again) or that his facepalm will hurt his other daughters' feelings, not to worry; Christine reassured Dearly that she knew ahead of time that he was going to play some kind of a joke (though she didn't know what, exactly, he was planning to do) if the icing turned out to be pink, and the girls totally knew he was kidding. Besides, I'm sure he knows there's no point fighting it — he's already outnumbered, anyway. "Five girls never hurt anybody," Mom calmly reasons at the end of the video. "I think." Looks like they're about to find out!

So Dad gets his five daughters, and a dose of viral fame to boot.

A win-win situation. Well, sort of. I'm sure that dad's mind flashed-forward real quickly yet again thinking about proms and all sorts of teenage drama. He'd get it with boys, but that doesn't mean he's thinking rationally at this moment!

Not everybody is on board with this practice and the reasons why are surprisingly numerous. What's the problem with such celebrations? Well, we're glad you asked!

Gender is a hot topic, and what seems like innocent fun can have alarming implications that many, not least of which the parents, might not be thinking about in anticipation of the big reveal.

The whole thing is kind of silly. First of all gender reveals ARE silly, but parents love to celebrate their pregnancies. The fallout also seems a little silly, too.

But if you're interested in gender reveals, there's plenty of material online.

For either sociological or entertainment purposes. You can pick your purpose with the material at hand.

And so, the debate over gender reveals rages on.

Between pro- and con- factions who have little to do with the families featured, but feel they have a stake in stopping harmful social constructs.

And if you're a dad or prospective dad looking to be famous...

You now have an idea of your competition. Which is perhaps the REAL thing parents should want to avoid with the popularity of gender reveal parties.