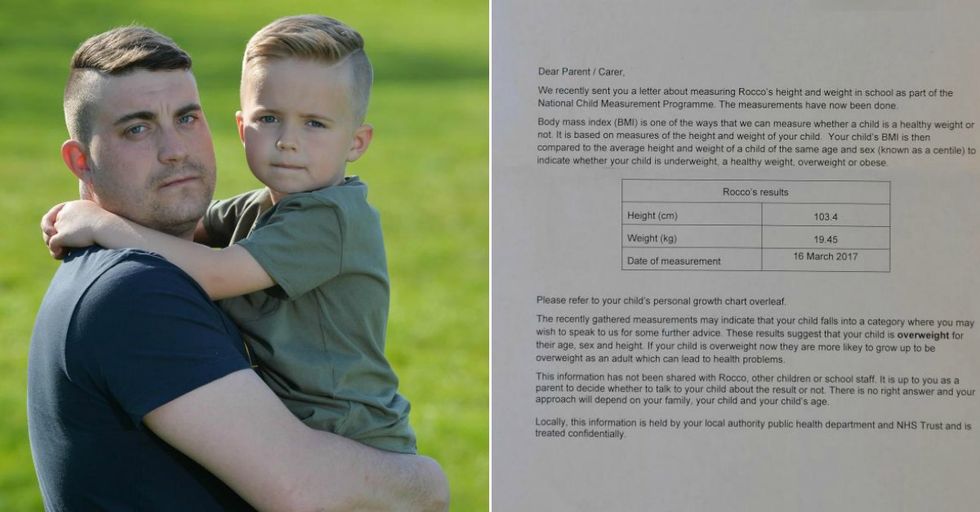 BMI is a measure of body fat based on height and weight, but it's a flawed measurement system because it doesn’t differentiate between amounts of fat versus muscle.

With that said, it's also something that can't be accurate for growing kids because, well, they're growing and developing at different rates.

If you happen to have a child who ISN'T a picky eater, consider yourself blessed.

They're just...wired that way. A whole subset of recipes exist to help parents out with Most often they grow out of it.

Regardless of what most parents think, they assume it's THEIR job to act on their kid's eating habits, right?

Of course. Parents tend to be pretty territorial over how they raise their kids, and with good reason.

But when kids are spending as much time in school as they are at home, officials often feel responsible for throwing in their two cents.

For better or worse.

When does a school overstep its bounds in a kid's life...or a parent's?

It's a question we're seeing more and more of, but there's no easy answer.

One dad thought the school crossed the line when he received a shocking note about his son's dining habits.

Check out the details on the next page. How would YOU have reacted?

Mark Sidaway, a dad in the U.K., is fuming after his five-year-old son’s BMI was measured at school and branded "overweight."

Rocco was also warned he would probably become a fat adult, even though he weighs just forty-two pounds, is only two inches under the national average for his age, and is one of the skinniest boys in his class. He was given the U.K.’s health test under the Government’s Change4Life campaign aimed at tackling child obesity, and his BMI was eighteen, one point above the limit classed as healthy.

Sidaway was floored when he found the letter regarding his son.

“I’m furious over this. We really struggle to get him to eat as it is," Sidaway said.

“I had just been in a meeting with the teachers and they asked if there was anything we wanted to raise," he added. "I said that we were having problems getting Rocco to eat, and he always came back saying he hadn’t eaten at school." “They agreed and said they had noticed. Then as I left I picked up the letters from Rocco’s tray and at the bottom was this letter," he continued. “It said he was just short of being obese and if he carried on he would have lasting health problems."

“I just couldn’t believe it," he said. "They only need to use their eyes and a bit of common sense."

He added that his son is always active and it's hard to get him to sit still for long. Rocco’s mom Kylie Tolley, who also has one-year-old son Luca, said the teachers at the parents’ evening said Rocco was doing well. “The teacher asked if we had any concerns and I said he didn’t eat very much," she said. "Just a few spoonfuls of sweetcorn and then he dashes off to play."

“There’s no way Rocco can be classed as fat," she said. "There’s not an ounce of fat on him. We asked the teacher about the results and she shrugged it off and said he’s short."

“These tests are ridiculous," she added. "We sometimes spend an hour trying to get Rocco to finish his dinner." As for the school, Shropshire Community Health NHS and David Porter, headteacher at Belle Vue Primary School, said: “This is a national initiative, provided by external health experts and supported by all Dudley schools, as part of our wider work around promoting healthy and active lifestyles in school. The parents supported the initiative after being contacted before health professionals came into school and were also written to with advice based on the results of the individual assessments along with an explanation." What do you think? Was this out of line for the school or a valid concern?

That's been known for ages.

But when does "helpful" become interfering?

It's hard to draw the line when schools are in charge of feeding our kids. I mean, if we want our kids taught nutrition, don't we want their food intake monitored?

There's no easy answer, but parents will nonetheless get protective and angry over their kid's well-being.

So do you yield to the parents' wishes? Even if the kid's eating poorly?

Perhaps the answer lies in a more collaborative effort between schools and parents.

That could keep everyone happy. Because this DOES seem to be a problem.

Chances are, everyone's working with the same goal in mind.

It's just, as usual, all about how you frame the issue.