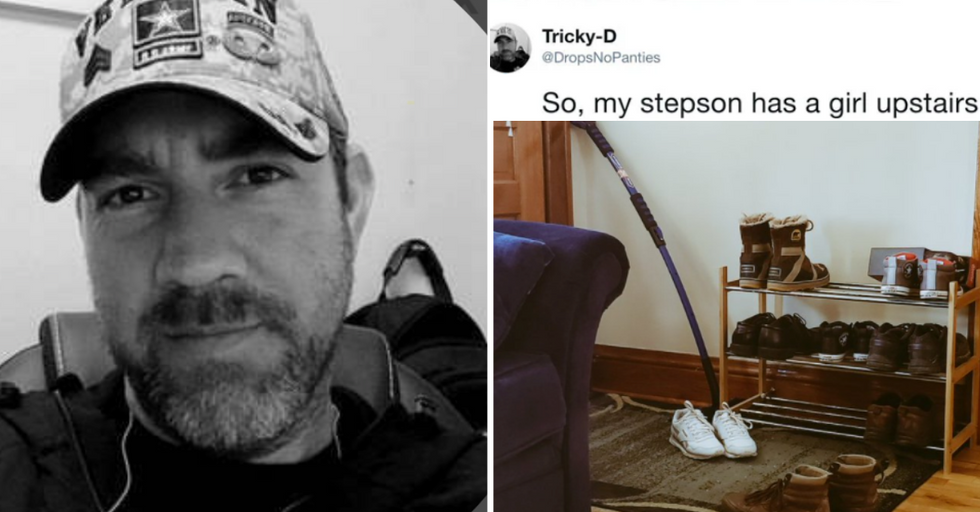 This Dad's insane story of his teenage son attempting to sneak a girl out of his room is one heck of a wild ride you have to read to believe.

It all started with a single Tweet by an amused Stepdad.

He sets up a pretty hilarious scene, one which was ripe with intrigue and suspense. I was hooked the minute I started reading this.

In her determination to rid their home of any trace of dirt, this man's wife was blissfully unaware of the nefarious acts that took place under her very own roof. The next tweet includes a photo of something that's seriously out of place. Can you figure out what it is?

A sole set of sneakers were the only piece of (glaring) evidence.

For, apparently, their house was not normally one to include a pair of shoes so blindingly white. Seriously, how does she keep them so pristine?!

The teller of this tale seemed shocked at how oblivious his wife remained.

Those shoes should have been a blinding beacon of sneaky behavior, but instead, they remained undisturbed. This kid's time is clearly running out, right? Click Next to find out why that might not be the case...

Apparently, when this woman cleans, she cleans hard.

So hard, in fact, that he somehow managed to snap a photo of her without her knowledge as she goes full-tilt on whatever horrors lie at the bottom of the bathroom tub. I admire her determination.

Some people had less than positive things to say about how the Stepdad was handling the situation.

Help the kid out? That would just be reinforcing this behavior. Plus, he clearly finds it far too entertaining to intervene. The tension keeps building in the next few tweets...

Things start heating up as more and more time goes by.

It's starting to seem pretty grim for these two lovebirds since she's now positioned directly in front of their only source of escape. You can't help but feel a bit bad for them.

Since these updates were happening in real time, Twitter basically lost its collective mind.

Seriously, I should have grabbed a bag of popcorn before I started reading this thread. Although I probably would have choked on a kernel from all the gasping. Alright, now I'm dying to hear what happens next...

The Stepdad also starts feeling some sympathy for our poor Juliet.

As someone who pees about 50 times a day, having to wait several hours to go to the bathroom sounds completely torturous. I would be checking out the window situation at this point.

Since the responses had been mixed, the Stepdad decides to throw up a quick poll.

In a near landslide victory, most people are rooting for these two crazy kids. I have to say, I would have been one of the people voting for Mama Bear, but that's just me. So what else does Twitter have to say about this thrilling tale? Find out on the next slide.

The vote turned out to be fairly divisive.

This guy is all of us!

This could be the break they've been waiting for.

One more hour of holding your pee?! Is this really worth all of this stress and abdominal pain? This next tweet made me do a literal spit-take...

One concerned follower offered up this helpful solution.

Because this idea clearly worked out really well for this person. People can land on their heads on concrete and be fine, right?

At one point, this user was so caught up in the story that she feared for their lives.

Okay, so it would probably be a pretty big overreaction for Mama Bear to kill everyone, but we get her concern. And honestly, I'd be pretty ticked off if all of this was happening in my own house without my knowledge. Stepdad gives a much-needed update in the next slide.

Stepdad didn't do much to alleviate her anxiety.

He claimed that he was still "waiting" and "watching" at that point, meaning he wasn't entirely sure if the result would be a killing spree or not.

Honestly, this thread has already lived up to the hype.

Will Mama Bear discover this secret stowaway? Or will he somehow be able to get her out of the house without her ever being the wiser? It seems like too much to hope for at this point. But the story takes yet another crazy turn...

This user lamented about how hard it was to wait to hear the outcome of this riveting tale.

Seriously, I haven't watched a full commercial in years. How do you expect me to wait for over an hour to find out how this thing ends?!

Finally, a glimmer of light appears at the end of the tunnel.

In a moment that seems like it would change everything, the girl actually came downstairs and used the bathroom. Did Mama Bear even see her? Is it all over?! This next tweet will blow your mind.

It seems, by some miracle, that it's not.

Either she somehow didn't see her at all in her manic cleaning spree or she did see her but wrote it off as just a friendly hangout session. These kids are beyond lucky.

After removing the damning evidence, the kids make the final plans for their daring escape. It seems as if they might pull this thing off after all. But will they?? Keep clicking to find out!

Although I was pulling for Mama Bear, the fact that this kid was able to keep his nighttime activities from his oblivious Mother is something to be admired. It's basically every high schooler's dream come true.

Oh, I could definitely use a drink right about now.

I don't know about you, but my palms were sweating the entire time I was reading that. The twists and turns! The suspense! It was almost Shakespearean. This Stepdad guy is pretty darn awesome, and the next slide proves it.

It's no surprise that this Twitter story quickly became insanely popular.

After all, a lot of people probably read that and directly related to the experience of the 18-year-old son, but perhaps their experiences ended with a less-than-positive outcome.

Some Twitter users were not having a few aspects of Stepdad's reporting.

For example, the fact that he just watched and took pictures while his wife cleaned herself into a nervous breakdown. But his response was that, while he may not help out with cleaning, he's a VIP in the kitchen. Gotta love a man who cooks! The next slide reveals one Twitter user's ridiculous response to this wild story. And Stepdad? Not having it.

This Twitter user suggested a way for Stepdad to win some major points with his son.

Sure, because Mama Bear would totally see a ladder outside her house leading to her 18-year-old son's window and think to herself, "That looks normal. I'm sure there's no funny business going on there whatsoever."

Luckily, Stepdad was not having that idea.

Because forcing a girl to exit a house through a window and out onto a ladder in negative 4-degree weather is just plain cruel. This guy seems like a real softie. This next tweet is relatable AF.

Some people felt downright inspired by this captivating tale.

If this young man can set his mind to something and accomplish his dreams, maybe there is hope for the rest of us after all.

One user seemed to think that Mama Bear was, in fact, aware of the situation the entire time.

I actually relate to this statement. My house is never as clean as it is after a particularly brutal fight with my husband. Angrily cleaning is the most thorough cleaning. So, did she know the whole time? You've got to see Stepdad's response to this theory in his next tweet.

But Stepdad shut down that theory immediately.

It appears that she really was just cleaning the way she always does on the weekends and that his Stepson was able to pull off the most impressive con that household had ever seen. And he's probably pretty darn happy with himself right about now. Although, now that this has gone viral, Mama Bear is pretty much guaranteed to know what happened at this point, so let's all just assume that he's in for quite the earful. When you fly too close to the son, you're bound to get burned.

I think it's important to remember the one major takeaway from this story, though.

If you don't want your Mom to find out that you have a girl over, take her blindingly white shoes up with you when you hide out in your bedroom. It's just common sense, kids.