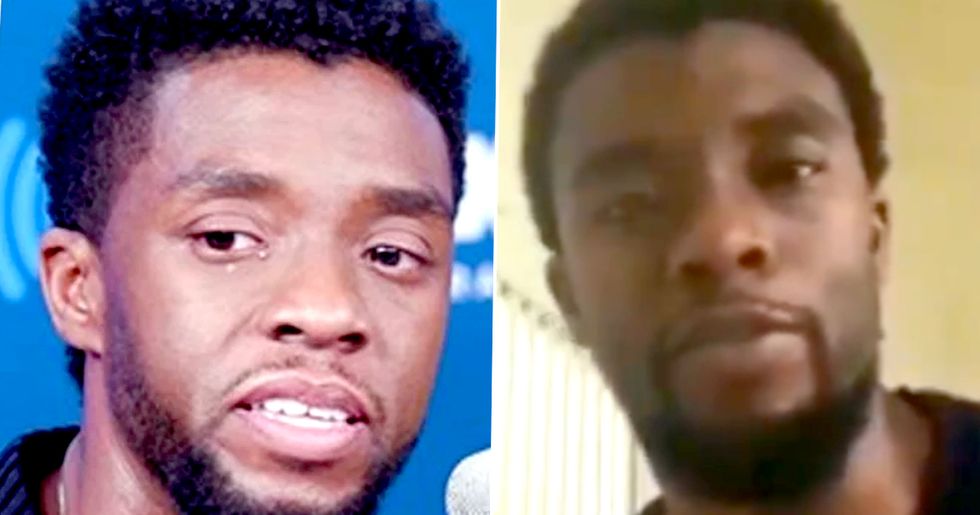 Chadwick Boseman, the iconic actor and star of the film Black Panther tragically passed away two days ago.

Following the heartbreaking news of his death, many are looking back through Boseman's old interviews and one is really making the rounds on the internet.

The interview shows Boseman discussing the impact Black Panther had on two young kids with cancer. What wasn't known at the time is that Boseman too was struggling with cancer.

Now, one of the child's dads has shared the message that Boseman sent to his son at the time.

Keep scrolling to check them out.

Now, one of the child's fathers has spoken out.

Chadwick was talking about my son when he broke down and cried. He was heartbroken that Taylor didn't get to see th… https://t.co/9jUTgcrKkA
— Brian Hammond (@Brian Hammond)1598686559.0

Brian Hammond, one of the boy's fathers, spoke out in an emotional post, thanking Boseman for giving his son hope. Hammond shared the interview and wrote:

Chadwick was talking about my son when he broke down and cried. He was heartbroken that Taylor didn't get to see the finished product. When all of the world's eyes were on him, his heart & mind was on our angel.

He also shared the message Boseman sent to his son.

This is the first message Chadwick Boseman sent to my son in 2017. He had already been diagnosed with colon cancer,… https://t.co/e8vLQWobuq
— Brian Hammond (@Brian Hammond)1598738527.0

In the clip, Boseman can be seen wishing the boy all the best, saying how courageous he is, and how he hopes he has a great weekend away. The clip ends with the youngster's response to the video who is completely overjoyed and thanks Chadwick 'so much'. It's a real tearjerker and goes to show just what a guy Chadwick was and what an impact he had on so many.