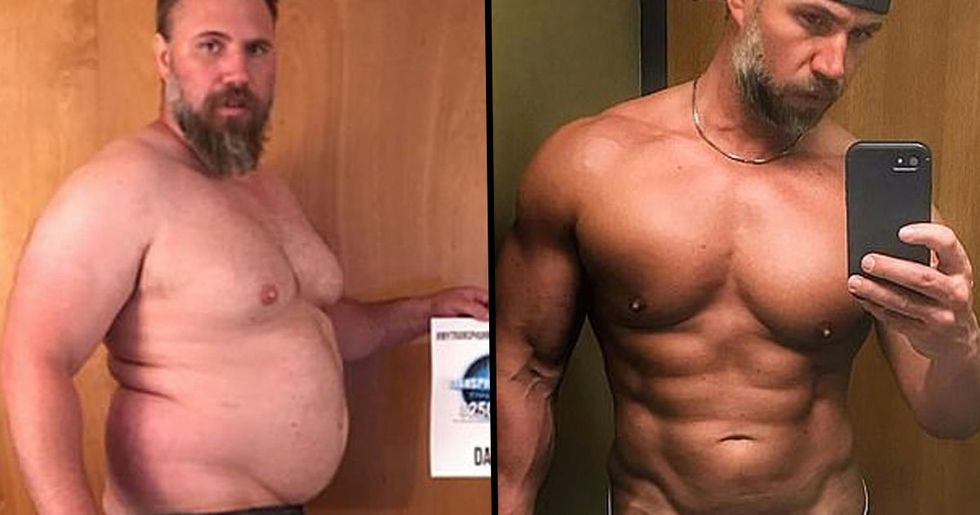 Jeremiah Peterson always loved sports and fitness. He didn't just work out but learned about the science of exercise too.

His struggle with weight began when he began a family and his very first business. The stress and workload made him gain a significant amount of weight.

It was only after a family hiking trip in 2017 that he decided to make a change.

The love for his family was Peterson's source of motivation. He wanted to be the best parent he could be.

The secret to his transformation? An intense workout routine to build muscle and a crazy diet, known as the "keto" diet, to lose weight.

In just 5 months, Peterson lost ninety-two pounds and re-built his confidence. Now he offers training programs and inspires others to make healthy changes in their lives too.

Read on for before-and-after photos of his transformation and his tips on motivation, exercise, and diet.

Jeremiah Peterson, 40, grew up loving sports and the outdoors.

He got into fitness while still a kid because he wanted to be strong and able to "protect [himself] and others from being bullied," according to his website The Keto Fitness Coach.

"I started going to the Y every day after school and really fell in love with weight training," he says.

After Trinity, he got a double major in Exercise Science and Coaching.

In 2004, he met his wife and they started a family in 2008. His weight problems began when they opened a business and the stress got the best of him.

"After we opened our first business is where I really began to put the weight on."

It kept getting worse until he reached his "heaviest weight of 292 pounds."

That's when he decided to do something about it.

He realized he couldn't keep up with his 3 children anymore and that something had to change.

His determination led him to lose ninety-two pounds in just 150 days.

It all started on one fateful day in 2017 when he went hiking with his family while weighing 290 pounds, says Daily Mail.

"Instead of remembering all the good memories we had made on this trip, all I can remember is this one thing that kept playing in my head over and over again," he writes on his Instagram page.

"I found myself running out of breath and having to take breaks way before my 9-, 7-, and 6-year-old kids."

The struggle of constantly feeling out of breath was extreme.

It made him reconsider his priorities. "I looked myself in the mirror and thought about my family, my responsibilities and how I would be forty in less than a year."

"I knew I HAD to make some serious changes in my life."

Peterson has shared with his followers what keeps him motivated and talked about the diet and workout routine that was the core of his incredible transformation.

"I want to get into shape because I don’t have enough energy to be productive at work," he says.

"I want to be productive at work because it’s important to provide for my family."

"I want to provide for my family because being a great parent is rewarding."

"I want to be an amazing parent because I believe it’s part of leading a good life."

"My family has and always will be my why."

"Finding your reason why is essential if you want to achieve success in life. If you don’t have a strong reason behind your actions you are less likely to get the results," Peterson explains.

"Your why will pull you up when you feel like you don’t have the strength anymore."

"Your why will keep you fighting when everyone else thinks you are down for the count."

Finally, he adds, "I will do this. No matter what! My family is counting on me!"

And he did do it. The father of 3 is now ninety-two pounds lighter and using his success story to inspire and teach others. But how did he achieve his goal so fast?

The secret to his transformation is... an intensive workout routine and a "keto" diet.

Peterson worked out twice every day to build the muscles, while the ketogenic diet helped him drop weight.

The diet is also known as a "low-carb, high-fat" diet, according to Daily Mail.

It requires you to cut the number of calories you consume by cutting down on carbohydrates, and instead increasing the amount of healthy fat you consume.

Some people also choose to drink "bulletproof coffee" that's made of black coffee and ghee (clarified butter) - it's supposed to keep you from getting hungry.

The diet works by sending the body into a "state of ketosis," as it burns fat instead of carbs to get energy.

Carbs are the primary source of energy.

So when the body is starved of them, it starts using the fat it has already stored.

On the "keto" diet, fat is also turned into ketones in the liver, which provide energy for the brain.

Daily Mail says the diet helps not only to lose weight but also drastically reduce high blood sugar and insulin levels - the cause of Type 2 diabetes.

However, some people claim this type of diet is extremely unhealthy.

One of them is trainer Jillian Michaels who has recently criticized the diet, claiming it's "unhealthy" for the body. But people say they've had great results anyway.

As for Peterson's workout routine, he does a 2-mile hike every morning, then hits the gym in the afternoon.

To get rid of the carbs, he's cut out bread and pasta and replaced them with meats and healthy fats.

"Since I turned the keto wheel I have found I don’t crave stuff that jacks my stomach up anymore," Peterson says.

"I don’t feel disgusting and bloated after I eat and my body feels so great the next morning in the gym."

"Carb hangovers are for real," he adds. "I hated that carb fog I would feel when I use to overindulge on the weekends."

When he cooks meat, Peterson prefers grilling and always adds healthy greens as a side.

When he wants a burger, he uses lettuce leaves instead of buns.

He's also decided to sacrifice alcohol for his dream body. He cut it out completely.

That's how Peterson went from pants size forty-two to thirty-three.

"The harder the goal, the more confidence we gain from reaching it," he writes on Instagram.

"For myself, a lot of my self-confidence has come from meeting my fitness and body image goals from my transformation."

"If you're suffering from a lack of self-confidence and searching for a way to improve yours, try setting some fitness or weight loss goals," he suggests.

"When you achieve them, you'll gain the confidence to believe you can do more."

Now Peterson uses his Instagram to guide his 90,000 followers on how to become the best versions of themselves.

Check out his complete journey in the video below.

"Do not waste another day of your life wishing for something!" he writes on Instagram.

"Take your life into your own hands!"

"You don’t like your body, make a change. Throw away the junk food."

"If you don’t change the next 5 years of your life will likely be exactly like the last 5 years!" "Make a choice to change something RIGHT NOW!"