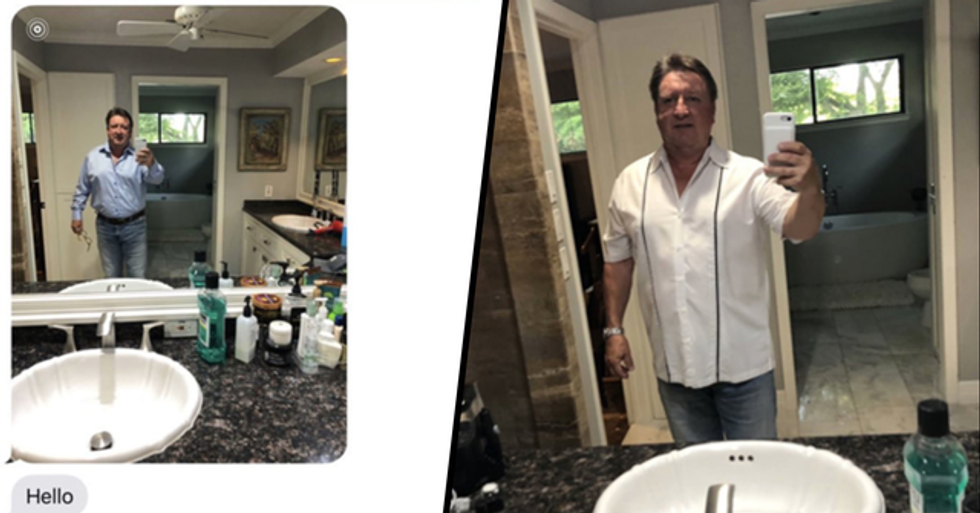 A single Dad from Texas went viral after he sought fashion advice ahead of a first date from his daughter, and they shared the most adorable text message exchange while discussing potential outfits.

His daughter shared screenshots of their messages onto Twitter and found herself being bombarded by people wanting to set her Dad up with their own single parents.

First dates are always going to be daunting.

There are so many things to take into consideration - Will you hit it off? Will there be many awkward silences? What if they don't look anything like their picture?

You need to make sure you're dressed to impress.

No one wants to turn up to a first date wearing their slacks...

And, often, nervous date-goers rally together the troops to help them decide on an appropriate outfit.

Now, most people turn to their closest friends for fashion advice...

But some turn to their daughters. I mean, I suppose kids are always more clued up on fashion than their parents are, right?

Well, one man had this idea exactly.

Jeff Saville, a Texan man who is a single Dad to 4 daughters, was getting ready for a first date when he found himself torn between what to wear.

Jeff turned to his nineteen-year-old-daughter, Carli...

And sent her 2 different mirror selfies of his potential outfits for the date.

The selfies were adorable.

Jeff texted his daughter asking "tucked in?", and Carli can be seen responding by instructing her Dad to "send another with the shirt tucked in", so she could compare.

With a different shirt tucked firmly into his belt this time.

Which shirt should Jeff go for? The white, short-sleeved number?

Despite which shirt Jeff decided to go for, he looked simply dashing regardless.

Carli shared screenshots of her Dad's texts onto Twitter...

Where she wrote, "Life with a single dad, asking for advice on date outfits. My heart."

With thousands of people offering their advice on Jeff's shirt of choice.

Blue consistently came out on top.

Yet, despite how dashing Jeff looked prior to his date...

Carli announced that her Dad had sadly been stood up. When someone wrote, “Dinner on us if he brings a date," Carli replied, “Considering he got stood up, I’m sure he’ll be glad to hear it!!"

How can this happen?!

Obviously, people were simply heartbroken to hear that Jeff had been stood up, and were quick to send their messages of support to the lonely bachelor.

And condemn the unknown woman to Hell, of course.

Whoever stood lovely Jeff up... If you're reading this, you're going straight to Hell.

Other women also wanted to remind Jeff of just how handsome he is...

Forget your failed date Jeff, there are plenty more fish in the sea!

And, upon the sad news of Jeff's single relationship status...

Many were quick to try and set him up with their own single parents...

Some even sent photos of their single mommas...

It turns out that Jeff isn't the only single parent out there...

And he is an extremely sought-after bachelor, with a variety of different Twitter users eagerly sending photos of their single moms.

Hell, some women even sent in photos of themselves...

And it quickly came to light that Jeff wasn't alone in his fashion journey...

It turns out there are a lot of Dads on dates out there...

And this poor guy simply couldn't contain his nerves.

Though some are lazier than others...

Dads! What're we going to do with them? Speaking of lazy Dads, one man went viral after he lost his daughter's hamster and sent her a series of hilariously panicked text messages... Keep scrolling for more.