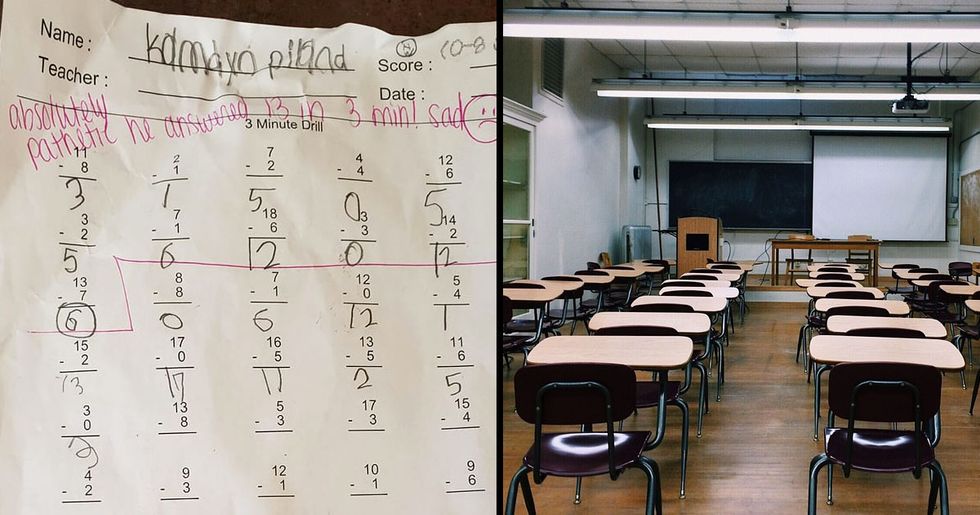 Teaching is difficult, it’s one of the toughest jobs out there; economic insecurities have to be dealt with, there’s the constant work, everyday senior management attempts to quantify your output, and, on top of all that, you have to inspire children and young adults. There’s no question that teachers should be given a certain amount of leeway when it comes to lapses of judgement and peaks of emotion.

However, is calling a seven-year-old’s attempt at arithmetic "absolutely pathetic" acceptable? Many people say that it’s not. But can teachers be blamed for a lapse in judgement, when the emotional requirements of their employment are so high? And are the teachers the problem, or is it the wider issue of the standardization of learning?

Keep reading to find out more.

And little Kamdyn Piland from Pennsylvania came home baring a comment on his test that his father, Chris, deemed to be entirely unacceptable.

It was a basic subtraction test, and Kamdyn managed to answer thirteen questions in three minutes, which doesn’t seem too bad.

Children of seven are absent-minded, and they should be, no seven-year-old feels entirely at home answering standardized test questions inside a dingy classroom.

It was the comment that the teacher left at the top of the paper that really upset Chris.

The comment read "Absolutely pathetic, he answered 13 in 3 min! Sad (followed by a sad face, drawn in red ink)"

But, honestly, I remember worse from my school years - not that my memories redeem the situation.

The father was, understandably, absolutely furious.

Chris Piland pushed for the school board to fire the overly harsh marker, calling the teacher, "so rude".

After the paper was posted on social media, the inevitable happened.

The post soon went viral, and many teachers and parents disagreed on the issue of whether the teacher deserved such a severe reprimand.

A petition was initiated.

A petition, drafted with the aim of getting the teacher fired from her job, has now gained more than sixteen-thousand signatures.

The school board is understood to be investigating the situation.

The teacher, named Alyssa Rupp Bohenek, has not commented on the situation.

People commenting on the situation disagree as to how the teacher should be reprimanded. Firing seems way too harsh to us; teachers have off days, it’s not abuse - it's just bad teaching. Here’s what commentators said…

"This needs to go to the board of education"

We doubt that the teacher was trying to "kill this child’s self-esteem". We imagine that she was just frustrated that her students weren’t achieving as well as she wanted them to.

"Now that you’ve addressed the teacher…"

Some children just don’t like (or aren't that good at) math. When did that become such a bad thing?

Us either! Why would anyone have a problem with the child? That’s missing the point completely.

"This teacher is a piece of crap…"

Woah calm down... teaching is hard, give her a break.

We think you may be right there, Margret.

Again - teaching is really difficult. That’s why parents outsource it to the state. Also - it’s "an" uneducated hag...

Okay, stop! I had a horrible math teacher when I was growing up. The word "pathetic" wouldn’t have felt out of place or anomalous under his stony watch. But it didn’t traumatize me out of enjoying mathematics. I dislike math purely because it's unyieldingly boring, not because of Mr Grey.

David’s got a point. Kids need to learn to deal with emotional adversity. That’s why the Government spends so much money on state-funded bullies in schools...

What do you think? It is wrong to be using this kind of language on children or is it character building?

As no one has taken the time to ask the teacher in question her thoughts on the whole thing, we're going to venture a conviction as to who the real enemy is here.

Why was a seven-year-old made to learn in such a "pathetic" way in the first place? It's not the teacher's fault.

Over the years, senior management has homed-in on the quantification of learning. This puts pressure on teachers (as they have to hit constant quotas) and ruins learning for millions of children. This is a profoundly macro issue.

Ken Robinson is an educational psychologist from the UK. He’s spent a long time looking at how the school system could be reformed.

Why does school have to be so boring?

There’s no reason for math to be taught like this - we'd venture that Kamdyn’s teacher didn’t design this test. And, if she did, we imagine that she felt, at the time, that it’s the only logistical way to surpass the many academic hoops that the school system sets upon the school sufferer (educators included).

We must make school more interesting for children!

And, more importantly, more interesting for teachers. Think back to the best teacher you had at school - we're certain the reason that you enjoyed their teaching so much was due to the genuine excitement that they reaped from their subject; this always rubs off. We have to strive towards making our teachers love teaching.

When do you snap at children?

You snap when you’re frustrated. People don't, by nature, dislike children - well, some people do, but those people tend not to enter into teaching. What’s needed is a conversation as to what drives teachers like Kamdyn’s to call a child "pathetic". We doubt that it’s because she’s a bad teacher. We think it’s because the system has failed them both.

There are three problems with this. (1). Standardized exams don’t teach children how to work or live in the adult world. (2). Standardized exams have a dramatic, damaging effect on students’ mental wellbeing. (3). Teaching students to pass exams is boring. It’s boring for everyone involved.

Of course, a seven-year-old shouldn’t have to learn in this way. It’s entirely unnatural - we need to work out better ways of triggering students’ interest in academic subjects.

Tests, like the one administered to Kamdyn, teach children that the world works in a way that means that you’re either right (smart) or wrong (stupid - in this case, pathetic).

Now, it’s true, that the discipline of mathematics is more inclined to work in this way - but the standardized nature of teaching today teaches children that the world works in this way - when it doesn’t. Even within mathematics, as impassioned children grow up and progress into the conceptualized realm of "further mathematics", this datum starts to tear.

We'll leave you with this.

This is how to teach, by Jupiter!