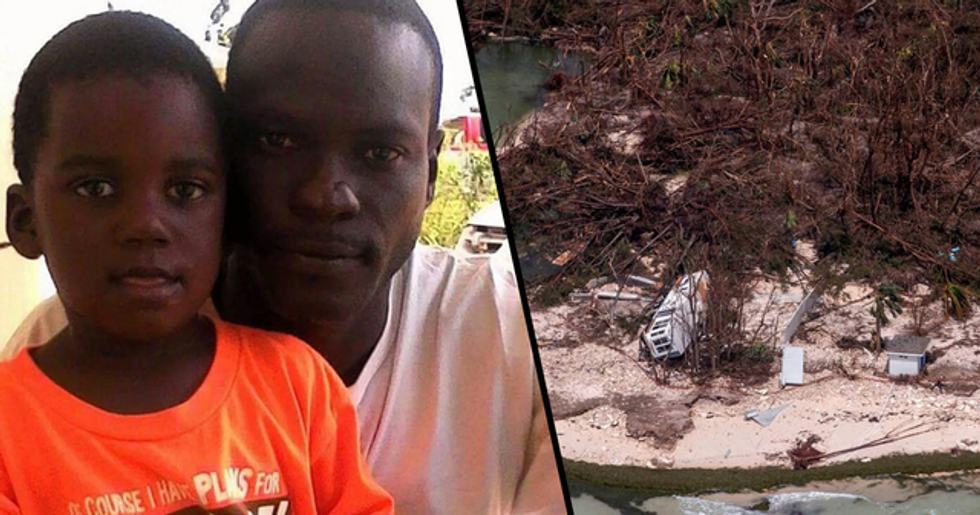 Hurricane and storm surge warnings have been rife throughout the last week as the formidable Hurricane Dorian stampeded its way across the Bahamas and North Carolina's Outer Banks. The hurricane, which was labeled as a record-breaking "Catastrophic Category 5 storm," produced the strongest and most deadly wind speeds on modern record, and has left tens of thousands of people homeless.

The deadly storm, which is currently over the cold waters of the Labrador Sea off Canada, has claimed the lives of over forty people, though this number is sadly expected to rise.

As the clean-up operation begins in the Bahamas, more and more heartbreaking stories are emerging of those who didn't survive the storm. And one dad has spoken out about his horror at watching his young son get swept away in the turbulent and shark-infested floodwaters while sheltering from the rising tide on the roof of their house.

Keep reading to hear the heartbreaking details around the tragedy, which truly is every parent's worst nightmare.

Hurricane Dorian became one of the modern world's most formidable storms.

Dorian initially developed from a tropical wave in the Central Atlantic on August twenty-fourth last month. And it went on to grow into an extremely powerful tropical cyclone, causing widespread flooding and destruction to the Bahamas and North Carolina's coast.

It was categorized as a Category 5 hurricane.

A Category 5 hurricane is the deadliest of them all.

In just 2 weeks, Dorian has caused destruction on an unprecedented level.

Dorian, which started as a Category 5 storm, gathered up wind gusts of up to 200 mph across the Carribean - more powerful than any other type of hurricane in existence.

The Bahamas took a true battering in the storm.

The storm first hit Abacos as a Category 2 storm but gradually moved across the Bahamas, all while being bumped up to Category 4 by The National Hurricane Center in mere days. And the damage is staggering. Roofs have been ripped off, cars overturned, and power lines pulled from the ground as thousands of people sheltered in schools, churches, and hurricane shelters.

The storm consistently threatened the States.

Hurricane Dorian spent a week stampeding right towards the path of Florida's peninsula, and tens of thousands of East Coast residents prepared for the worst.

The most severe storm effects were felt the most in coastal Georgia and the Carolinas in the middle and latter half of last week as Dorian picked up speed and headed north.

Yet, despite the storm affecting Georgia and North Carolina...

There have miraculously been no fatalities here in the States.

But the same cannot be said for the Bahamas.

As every day passes, more and more fatalities are being reported from the battered Bahamas. It all started last week when The Bahamas Press reported that a boy, aged only 7, became the first person known to have died in the hurricane.

Lachino Mcintosh was the first to lose his life in the storm.

Over 40 people have now been confirmed to have died.

At least 43 people are dead, and officials expect that number to rise dramatically as rescue efforts continue.

The storm has caused deadly flooding.

Though it was downgraded from a Category 5 to a Category 3 storm, Dorian caused terrifying tsunamis, which have subsequently brought on deep flooding with strong currents. The ZNS Bahamas reported that the storm surge caused water to rise eighteen feet to twenty-three feet above normal tide levels.

Heartbreakingly, several bodies have been spotted in the raging waters.

Foreign Affairs and North Abaco MP, Darren Henfield, said yesterday: "We have reports of casualties. We have reports of bodies being seen. But we cannot confirm those reports until we go out and have a look for ourselves."

Residents were urged to take shelter.

Even though many of the houses were completely destroyed in the storm.

As soon as the weather permits, first responders will go to those areas where we have reports from individuals who were in distress."

Not only do these floodwaters have dangerously strong currents...

They are shark-infested, too. And one dad has bravely spoken out about watching on helplessly as his young son was swept away in these turbulent and deadly waters.

AJ, aged 5-years-old, was tragically swept away with the current.

Adrian Farrington, thirty-eight, of the Abaco Islands, was outside Sunday with his son Adrian Farrington Jr. — nicknamed “AJ" — when he saw sharks, brought by the storm surge — practically at his doorstep, he told The Nassau Guardian.

The pair were sheltering from the rising waters on the roof of their house.

“Before I could sit on the roof to hold him, the gust from the hurricane dragged him across the roof back into the surge on the next side," Farrington said. “I still could remember him reaching for me and calling me, ‘Daddy!’" Yet, despite Farrington's best efforts, AJ couldn't be found again.

He spent hours searching for his son.

“I was like feeling to see if I could feel some kind of cloth, some kind of clothes, some kind of skin, flesh, tennis, something," Farrington told the paper through tears. “I ain’t find nothing," he said. “I come back up. I hold my breath and I gone back down again. All this time, people carried my wife to safety and they calling me, but I ain’t want to go because I didn’t want to leave my son." Farrington eventually became too exhausted from fighting against the current and had to abandon his search. Let's hope that AJ's body can be found and that his family gets the closure they deserve. RIP, little guy.