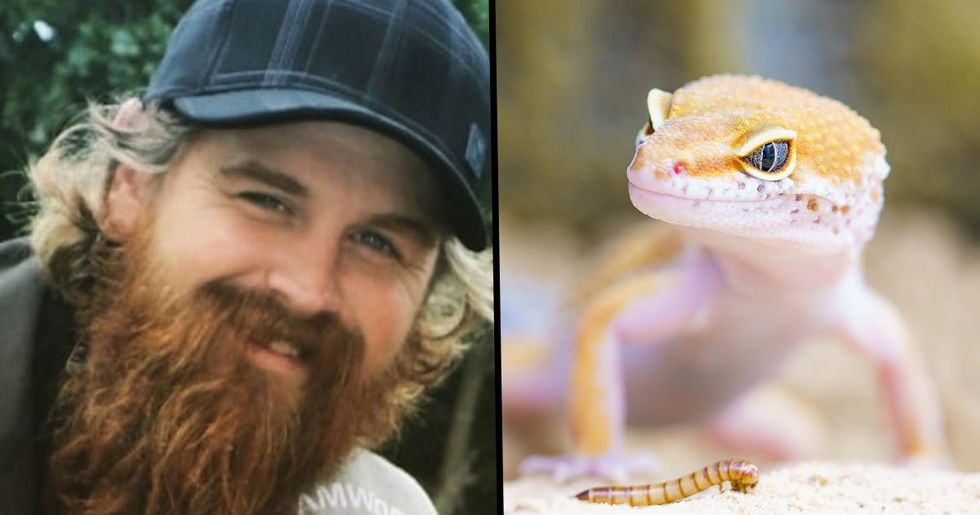 It seems that some people just aren't phased by what they put into their mouths, especially when there's a lot of peer pressure and alcohol involved.

Eating something a little disgusting is common practice at social events that come with lots of booze and a lack of responsibility. But nobody seems to ever stop and think about what they are actually consuming and allowing to go into their bodies - fortunately for most of us, those things aren't usually geckos...

Read on to hear more on this stomach-churning story.

It's super important to monitor what we put into our bodies.

When it comes to eating, it's vital that we ensure that whatever goes into our bodies is clean and safe. This especially applies when eating meat as, when uncooked, it can carry all sorts of harmful and potentially deadly bacteria.

And when it comes to eating animals...

Generally speaking, any animal with fur or feathers can be safely consumed as long as it is prepared and cooked properly. So if you find yourself stranded in the depths of a rainforest, you'll have a pretty vague idea of what you can and can't eat in terms of the wildlife surrounding you... just to be safe.

Reptiles and amphibians on the other hand.

These types of animals are not ideal to eat. At all. Reptile meat can be very harmful to the human body as it contains tonnes of bacteria, viruses, and parasites that our bodies are not designed to carry.

Lizards are known to carry the Salmonella infection...

Lizards, as well as frogs and turtles, are carriers of the Salmonella bacteria. Salmonellosis is an infection which generally affects the intestine and occasionally the bloodstream. Symptoms brought on by this nasty infection include severe stomach cramps, vomiting, diarrhea, and a high fever.

This is exactly why lizards aren't part of the human diet.

Among other reasons, of course...

One man in Australia went along with a very dangerous dare.

David Dowell, from Queensland in Australia, was a thirty-five-year-old dad of three. He attended a Christmas party last year when one of his friends reportedly dared him to eat a gecko.

David was in "absolute agony."

It's unsure as to whether the gecko was alive or not, but I can only assume that it was dead before David consumed the small lizard. 2 days after the party, David was rushed to Brisbane's Mater Hospital in absolute agony as paramedics initially put his pain down to a hangover or a bout of gastroenteritis - a fairly common stomach virus.

David's partner of fifteen years, Allira, begged the paramedics to take him to the hospital, and they soon realized the serious condition that he was in. A day into his hospital stay, David was diagnosed with the Salmonella infection.

The food-borne bacteria had spread quickly.

Despite Salmonella usually being treatable, it had spread quickly in David's body and caused irreversible damage. The dad-of-three began vomiting green bile, his urine turned black, and his stomach bloated to the size of a six-month pregnancy.

His lungs began to fill with fluid.

As well as his stomach leaking with fluids, his lungs also began to fill up. David was a day into his stay at the hospital when the doctors learned of him eating the gecko. Allira was told by a friend that they were "pretty sure" that he had eaten the lizard.

Speaking to 7 News, Allira spoke of how she had told the doctor about the possibilities of him eating the gecko, and the doctor said, "that could have been it." “But there has been no evidence that he actually ate it because there was, ‘Oh yeah I saw him eat it’, and then, ‘No, I didn’t see him eat it. It was a dare, so he might have intended to eat it and then thrown it away. At the end of the day, we don’t know whether he actually ate the gecko. David never mentioned it," she went on to say.

David's mom and his sisters, Hannah and Michelle, pushed doctors to operate. Speaking to The Brisbane Times, Hannah expressed that her brother was in "complete agony."

David sadly passed away during surgery.

David was pronounced dead on December 11th last year during his surgery. His sister, Hannah, said, "We had to ask for pain relief for David … He was put into a coma because they couldn’t control his pain. We never really got to say goodbye to him."

The family wants justice for David.

"It was like they didn’t really care. The moment he got moved into the intensive care unit, that’s when they got serious," Hannah went on to say. “I want justice for David … or just answers. You don’t ever think anything like this could ever happen to you and then it does."

Mater Hospital was unable to comment on the death of David.

In a statement, Mater Hospital said: "Mater offers its deepest condolences to the family of Mr David Dowell. Mr Dowell’s case was referred to the coroner, who determined Mater had provided appropriate care and no further action was required. Mater is unable to comment further on the case due to patient confidentiality."

Similarities have been drawn to the death of Sam Ballard.

After David's family said that he was "rotting from the inside out," similarities to the death of student, Sam Ballard, were pointed out. 8 years ago, when he was just nineteen-years-old, Sam's friends dared him to eat a slug crawling across the pavement of his Sydney home at a party.

His sickness wasn't immediate, but he began to complain of leg pains a few days after consuming the slug. It turned out that Sam had been infected with rat lungworm, which is usually found in rodents, but slugs often become infected after eating the feces of rodents.

When he finally awoke, he was quadriplegic - meaning that all four of his limbs were completely paralyzed after the parasite had caused an infection in his brain.

After spending the remainder of his life being cared for around the clock by his mom, Sam passed away at the age of twenty-nine with his last words to his mom being "I love you." This demonstrates the dangerous and heartbreaking effects of consuming produce that isn't safe for human digestion.

A large number of animals carry around harmful bacteria.

It's vital for us humans to be careful about what we allow into our bodies. Animals can carry certain bacterias and parasites without any harm coming to them, yet the minute that these viruses enter the human body, the injuries can be catastrophic and can even lead to death. The heartbreaking stories of both Sam and David should be considered to be lessons to us all. Doing something as reckless as eating a wild animal for a dare will not end in laughter; it will most likely end in death.