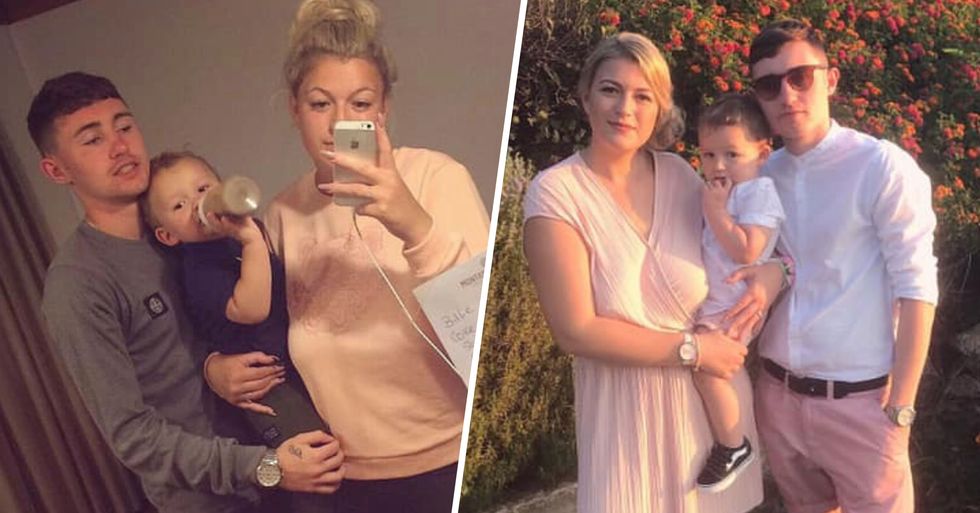 A young dad has opened up about the heartache over his rapidly deteriorating eyesight, and the fear he holds over the prospect of never being able to see his unborn daughter, who is due in July.

Charlie Macaulay is in a race against time.

At just twenty-one-years-old, Charlie, from Hull, England, is heartbreakingly facing the prospect of a life without his sight.

Slowly, his sight is deteriorating.

And it is all as a result of his diabetes.

He was diagnosed with type one diabetes when he was just 3-years-old...

And complications from his diagnosis has gradually led to the development of diabetic retinopathy.

But what exactly is diabetic retinopathy?

And what does it mean for Charlie?

Diabetic retinopathy is a diabetes complication that affects the eyes.

And Charlie's eyesight is now rapidly deteriorating as a result of the condition.

He has lost all sight in his right eye...

And has only poor vision remaining in his left eye.

His condition deteriorated as a result of misusing his insulin as a teenager.

Charlie admitted that, after being bullied at school over the insulin pump attached to his stomach, he started misusing it. "That's when I used to mistreat it and try to pretend it wasn't there," he said in an interview with Hull Live. "That was a tough time."

Bullying had a real effect on Charlie's health.

And he just wanted to be the same as his classmates. His mum, Sarah, explained:

"Once he got to secondary school [high school] he just wanted to pretend he didn't have it and that's had a knock-on effect. He just wanted to be the same as everybody else."

But it wasn't until late last year that Charlie began noticing issues with his sight.

And, after visiting the hospital and undergoing several operations, Charlie was then informed of his devastating condition.

Charlie is now living on the brink of complete blindness.

"Now I'm struggling to see and it's really tough," he explained. "I can't see my phone screen or cars when I'm crossing the road. I can't really go out on my own now, I've got to have someone with me."

As well as his eyesight, he is also terrified of losing his independence.

"I just don't want to lose my independence, it's had a massive effect over the past couple of months."

He admits that his diagnosis has taken a real toll on both his physical and mental health.

"I struggle with my mental health anyway and it's hard to take in. Sometimes I wonder how I keep it together without having some sort of breakdown."

But, for Charlie, his own health isn't the worst part of this awful situation...

It's the effect his blindness will have on his family.

Despite only being twenty-one, Charlie has his own family to look after.

The young man shares a 2-year-old son, Freddie-James, with his fiance, Billie Smith, who is currently pregnant with their second child.

His biggest fear is that he won't be able to watch his son grow up...

Or ever see his unborn daughter, who is due in July.

Charlie and Billie are also due to be wed in May this year...

But, again, Charlie is worried that he won't be able to see Billie walk down the aisle. "I'd marry her tomorrow if I could," Charlie said. "I just want to see her in her dress and I want to see my wedding and my little girl before my eyes go."

His small family has been an incredible support to Charlie during his health issues.

"My family are brilliant, they're always there for me if I need to talk."

At the moment, there have been no signs of improvement in Charlie's sight...

But he is determined to raise awareness about his condition. "I struggle to speak to people at the best of times but I want to start taking to spread awareness," he said. "I don't think we get taught enough about it, especially younger people."

He wants to highlight the severity of his condition...

And, to read about and sign the fundraiser for a diabetic charity that is helping people like Charlie, go here. Losing your eyesight is a harrowing experience for anyone - but some people take it in their stride and make something beautiful out of it. Keep scrolling to read about one husband who, wanting to do something kind for his blind wife, planted hundreds of flowers for her to smell in their garden...