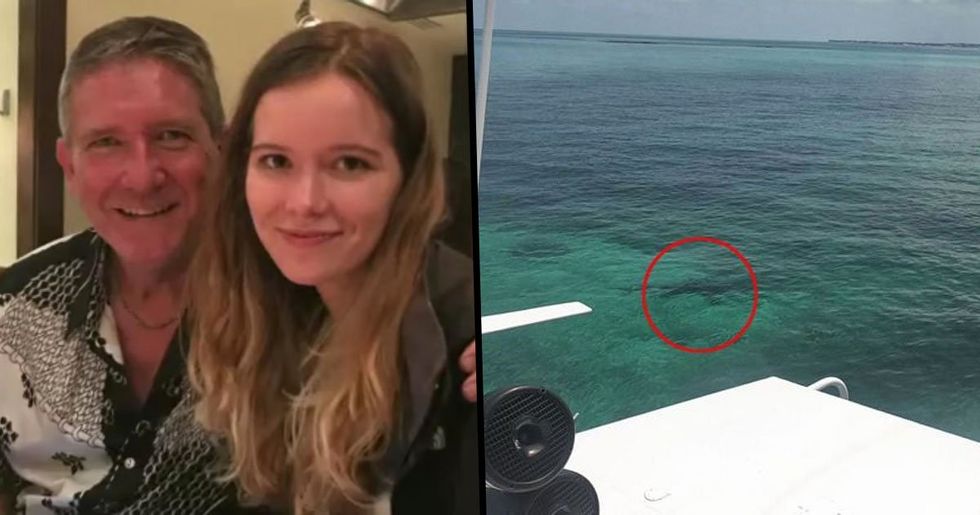 Going on vacation is one of the best things life has to offer. Sun, sand, and sea, what more could you ask for?

However, sometimes, things don't always go to plan. What are you supposed to do if you're just enjoying a dip in the sea and you're attacked by a deadly shark? Well, a girl from California was faced with that dilemma and tragically died at the hands of a shark while on vacation. What makes the story even more heartbreaking is that her parents were mere meters away, watching the scene unfold.

And, now, they've courageously spoken out about that dreaded day. Keep reading to hear the full story, as well as the details on how the girl's parents recovered after losing their daughter.

Jordan Lindsey was excited to enjoy a vacation in the Bahamas with her family.

The Californian family planned to visit the beautiful island in the West Indies for a well-deserved break.

The Bahamas is known for its tropical setting, it's sandy beaches and, of course, the sea.

So it wasn't surprising that they all planned on doing some activities during their stay. And one of these activities included snorkeling.

So the family booked the last-minute exertion.

It consisted of a day-trip to Rose Island, a small island located close to New Providence where they could go snorkeling.

But when Lindsey got into the water with her mother, Kami, she had no idea what was in there with her.

The two, along with another relative, were swimming around when, suddenly, Kami started screaming.

But Jordan could not hear her.

Instead, she continued snorkeling, unaware of the dangers that lurked around in the deep blue.

Her father, as well as her brother, were left on the island petting pigs.

They had decided to stay on the island to check out all of the amazing animals. However, they both heard the screams from Jordan's mother, which made them jump on a boat and rush over.

When they arrived, they realized why Kami was screaming so much.

In the area in which Jordan was swimming, you could see the silhouette of a shark close by. And, before they could even process what kind of danger Jordan was in, there appeared another.

And that's when the worst possible thing happened.

The sharks appeared on the surface and one of them bit into Jordan's right arm, taking most of it from her body. By then, other people had jumped into the water in an attempt to rescue her.

Her mother was trying to swim to her...

She was shouting "Jordan, come to me" but that's when she noticed that she was only using one arm. The horrifying realization that she had already been bitten was settling in.

Jordan tried her best to swim, but it was no use.

She shouted back towards her mom warning her that there was "another one [shark] coming" and that was the final thing that she said before another shark attacked her.

As hard as Kami tried, she was not able to reach her daughter in time.

Kami tried to punch the shark in the nose, but it didn't deter the animal. It then proceeded to rip chunks out of Jordan's other arm as well as both of her legs. She suffered severe injuries to her torso every time the deadly beast rammed into it.

However, when the damage had been done, her mother pulled her body to the rocks.

Her father, Michael, mentioned that Kami felt helpless. "I just kissed her on the forehead and said, see you later, Jordan."

Michael, spoke in detail about the horrifying moment.

He told ABC News: "She [Kami] said it happened so fast, and no one yelled anything. She got to Jordan and pulled her to shore by herself. The medical staff said they still had to do an autopsy. My wife said no one told her there were three sharks."

The heartbroken dad said that "he cried" every night after the tragic event took place.

So what was supposed to be a fun vacation to a tropical island, ended up becoming a family's worst nightmare.

The twenty-one-year-old died at the scene.

She was eventually taken to a medical facility in Nassau, where she was pronounced dead.

"We can confirm a U.S. citizen in the Bahamas succumbed to her injuries following a shark attack on June 26."

Another person who was also on the snorkeling tour with the family took pictures of the shark after the attack.

She told Mail Online that she had been swimming in that exact same area about approximately forty-five minutes before Jordan did.

The thirty-two-year-old from Texas said that she was shocked to hear the news.

"...People ran on to our side saying a girl had been bitten by a shark and it looked pretty severe. On my side of the island, we didn’t see any. But everyone got out of the water and we were pretty scared."

She then proceeded to take pictures of the deadly beasts, who were still swimming around.

Jace also mentioned that several of the workers jumped into the water in an attempt to reach Jordan.

But, obviously, sharks are better swimmers than humans, and they got to her first.

Recently, shark attacks are on the rise...

Even though they don't occur as often as you may think, shark attacks are becoming a common occurrence, especially on American beaches.

New Smyrna Beach in Florida is known as the "shark attack capital of the world."

As reported by the Independent two days ago, three people were bitten in separate incidents in the beach's deep waters. And, weirdly enough, they all took place within a day!

Apparently, one of the victims was only "knee-deep" in the water when the attack took place.

Beach officials reported that fifty-one-year-old, Peter Bourbeau, was bitten by what he described as a 4-foot shark.

The other two victims were both surfers.

Emily Comfort and Riley Petrovich were both bitten within half an hour of each other while they were surfing in Florida.

Gavin Naylor, a director for shark research explained why...

He said that due to a large number of baitfish that gather along the edges of the water, sharks are attracted to the scene.

And what he said next might put you off from ever taking a dip into New Smyrna's waters.

He explained that, if you enjoy surfing and have been amongst the waves, you have a high chance of coming into contact with a shark. He also added that every surfer has probably been within ten feet of one of these deadly creatures.

Most of the time, shark attacks don't result in fatalities...

If you're lucky, you can get away with minor injuries like these lucky beach-goers. However, in some cases, like Jordan's, you might not be so lucky.

Jordan's heartbroken parents recently spoke out about how they were coping without their daughter.

In an exclusive interview with ABC News, her dad painfully said: "Kami doesn't like the nights because once she closes her eyes, she's back in that water again." We can't imagine how scarring the ordeal must have been.

The family also added that they believe changes need to be made.

They expressed how companies need to have a detailed structure for when emergencies such as shark attacks, occur. And one thing that they stressed was the fact that the emergency vehicle that came to rescue them was not equipped with emergency supplies, so that would be another step in the right direction.

Obviously, they understand that emergencies happen...

But it's in the company's hands to try to prevent them, or to react more efficiently when they do. Let's hope that shark attacks don't become the new norm. RIP, Jordan Lindsey.