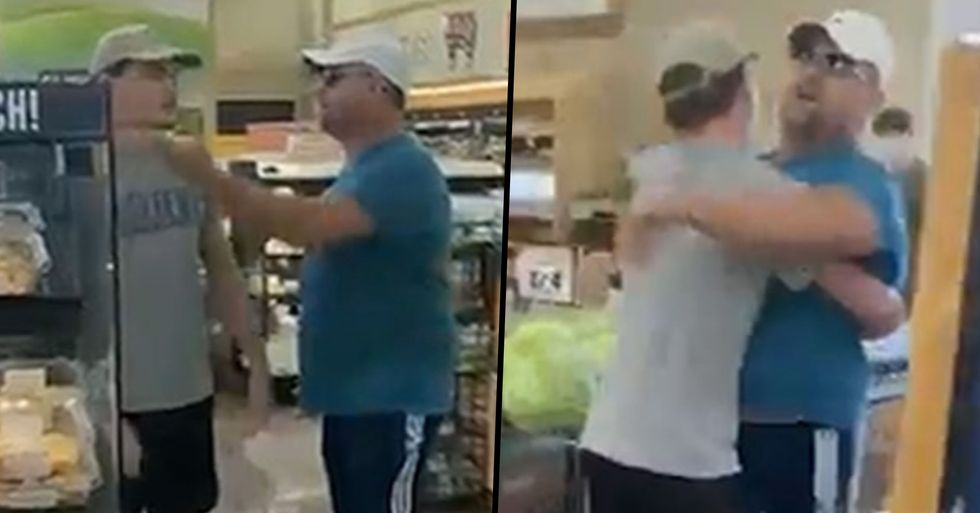 The use of masks in public places has caused a wild debate with some people claiming that they are a method of "control" by the government. Yeah, I know. But a man in Tuscan, Arizona had a little too much to say about the issue so he had to be carried out of a supermarket by his son...

Keep scrolling to watch the disturbing video, but I must warn you, it contains some pretty foul language that many viewers might find offensive.

There have been a number of anti-masker blunders over the past few weeks...

But this is perhaps the most dramatic yet.

Shoppers and employees alike were shocked to see such behavior in public.

But cases similar to this are becoming more and more common as lockdown and social distancing measures continue to prevail.

As we head into the 6th month of restrictions, we've realized just how much our lives have changed.

January seems like a long time ago now, doesn't it? Our lives have been turned upside down by the coronavirus pandemic.

In the past few weeks, we've been trying to return to normality...

But it's been a pretty difficult ride.

In some states, it has become mandatory to wear a face mask in certain public places.

Health experts have stressed their importance for those people that still don't get it.

But others have decided to be less accommodating to the idea.

Recently, one man has taken things a little too far.

While on an anti-mask tirade in a supermarket, he had to be carried out by his son who seemed to be embarrassed about his behavior.

I mean, who wouldn't be?

His father was on a disturbing tirade about how everyone's a "sheep" and how we're all being "controlled."

"You know it's not real!" (He's talking about the coronavirus, by the way.)

But then things took a twist when a worker at the store demanded he wears a mask or leaves the building.

Suddenly, he went irate, describing him, as well as other workers at the store as "r******" while repeatedly dropping the F-word wherever he could. A classic anti-masker.

Then he started yelling at someone else that called him a "child", telling them to "come outside."

If you're not familiar with aggressive language, that usually means "let's fight it out." I wish this dad would understand that he's a middle-aged man in a store basically throwing a tantrum over a piece of fabric right in front of his fully grown kids.

He starts trying to attack the man.

That's when his sons get involved, as they try and stop him from doing something he'll definitely regret.

But it doesn't seem to work, as the man keeps spewing foul language.

So one of the sons, the one wearing the grey shirt, takes it upon himself to end the entire thing by literally carrying his father out of the store.

But does that stop him from yelling?

Of course not, but at least he's out.

The rest of his maskless sons also follow behind.

It seems to be an embarrassing situation for everyone involved, but I feel particularly bad for the kids as the video has now gone viral of their dad making a fool of himself. As of right now, it has been viewed 1.7 million times. Wow.

And people were definitely shocked when they saw the clip.

This user "wondered what he's like behind closed doors."

While this user, who is a nurse, said this:

His behavior was pretty insulting to them.

Imagine being so goddamn angry over a face mask... Yikes. In other pandemic-related news, keep scrolling to see how Russia might have developed the first-ever coronavirus vaccine.