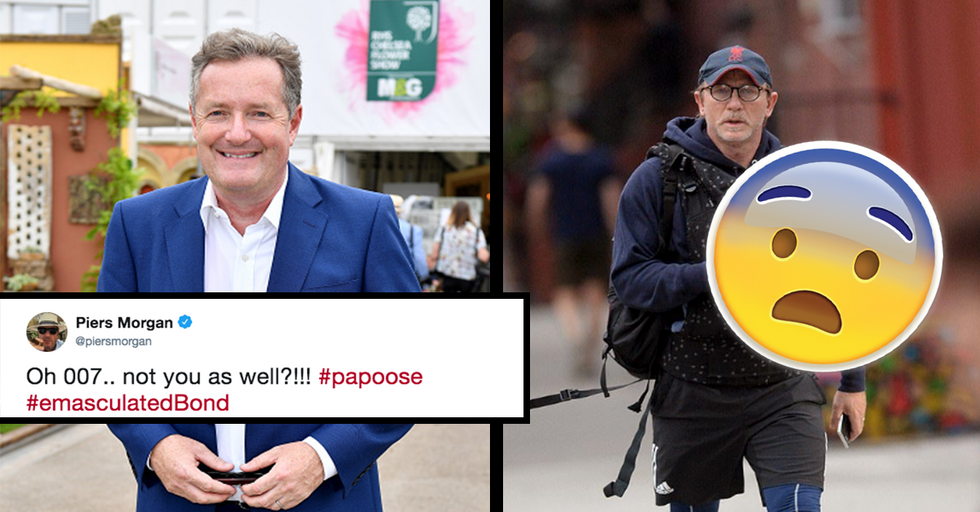 Piers Morgan, a British TV personality, known for his unique sense of humor and strong opinions, has angered a whole crowd of proud dads with one simple tweet. It involved a picture of Daniel Craig, AKA the actor who played James Bond, wearing a papoose to hold his daughter. If you don't know what a papoose is, you are about to.

I bet you thought moms were protective and defensive towards their children, but wait until you read the comments from these dads. They will have you standing and cheering out of excitement and support for any papoose-wearing papa. Many dads and moms stood up for men choosing to carry their child using a papoose, and Piers had quite a few things to say back to those who decided to respond.

We've got some good tea ahead, including pie throwing, an angry Chris Evans and even some Donald Trump jabs. It's about to get interesting.

This guy has had a bit of a sassy background, in and out of the workplace. He is known for his writing and editing at different tabloids, as well as for hosting multiple shows.

Hostess with the mostess

He appeared on America's Got Talent, and Britain's Got Talent as a judge and boy oh boy, judged. Think of Simon Cowell but colder.

He also won Celebrity Apprentice in 2008. Yes, I am cringing looking at this picture. Also, this is actual proof that Donald Trump really was that orange at one point.

He's a bit of a jerk

Here he made a little girl cry within three seconds of auditioning for Britain's Got Talent. This guy's so rude that he even makes Simon Cowell look good.

Stardom comes with a cost

Clearly, he's had his fair share of fame, whether it was in a good spotlight or not.

The spark that ignited the flame

This is the tweet that created quite a commotion online. Here, you see Daniel Craig carrying his daughter in a papoose, which is a sling backpack that is used to carry children. Clearly, Piers does not agree with men using papooses and said that this "emasculated" the James Bond actor.

Yes, he did make fun of 007 and challenged his masculinity, all because he was carrying his baby using a papoose. Here comes the Twitter rage.

The responses that followed were pretty adorable. The thread became filled with pictures of dads, very proud dads, carrying their babies in papooses. They love doing it and most commented on how it didn't emasculate them at all.

This guy showed that wearing a papoose will never stop dads from doing things that they love, like fishing. In this case, the papoose freed up his hands so he could fish. It looks like the papoose saved the day.

Mr. Bonding with his daughter

No masculinity was harmed in the making of this photo.

You really have to be so uncertain of your own masculinity to concern yourself with how another man carries his chi… https://t.co/MggU8bBd3s
— Chris Evans (@Chris Evans)1539654026.0

The actor called out Piers for being "terrified inside" because he felt the need to make fun of other men, disqualifying what he defines as masculine.

Captain American won't stand by while men quantify masculinity. He will always stand up for what is right, even if it involves a papoose.

Dog dads are out there

Even unconventional fathers were offended. Papooses are for puppies, too.

Get with it or get out!

This dad of twins is doing double duty with two papooses and making it look easy.

Any man can do it

This dad is a multitasking pro, getting the shot and being the dad of the year. This wouldn't be possible with the magnificent papoose.

Moms were mad, too.

Many moms jumped in to defend their husbands or boyfriends who use papooses to carry their children.

Can we get an amen?

Using a papoose has nothing to do with masculinity, and Twitter was quick to call out Piers on this.

Not all heroes wear capes

@piersmorgan Dads who step up during the tough early months, where babies typically “need” mom, are the real #Heroes
— Jody Vance (@Jody Vance)1539633913.0

@piersmorgan I never thought I’d have anything in common with 007 ANNND Capt. America @ChrisEvans. We all enjoy bei… https://t.co/DHmzns2iOI
— Erik Niewiarowski (@Erik Niewiarowski)1539678408.0

You, good sir, are absolutely correct. You have a lot in common with James Bond and Captain America, and the strong men who proudly wear a papoose.

After the original tweet got so much attention, (some even tweeted #PapooseGate because of how scandalous this tweet was) Piers responded to his followers who were "screaming abuse" at him, in his words.

First off, he's speaking on behalf of James Bond, who would most definitely wear a papoose. How else would he punch people in the face and drink a martini? He needs his hands free, so he can kill all those bad guys and look good while doing it. Also, James Bond is a fictional character. So, there's that.

I'm sure every kid has their own preference, but what do babies love more than being held closely, chest to chest, with mom or dad? Plus, they get to be warm and could easily take a nap. What could be better?

Not sure who made Piers Morgan in charge of defining a "proper" dad but I think he needs a refresher on the word.

Alright, these men are confused. Since when is holding your child considered humiliating? Clearly, Piers has some deeply-rooted misconceptions.

He really went there

Who hurt this man in the past? Was he never held closely as a child? I mean he is really coming for the papoose and all papoose fans.

Piers, you are the only ridiculous thing in this Twitter thread.

Someone needs to grow up

This feels like a, "I know you are, but what am I?" type of fight. No one wins in this situation.

Who are you calling a caveman?

I bet if papooses existed in the Stone Age, every caveman would be using them. It just makes sense when you have to, hunt and gather your food or whatever cavemen did.

Don't get too close!

This GIF is Piers Morgan every time he sees a man wearing a papoose, afraid his masculinity might dissolve by just looking at one.

What is "masculine joy?"

Carrying a baby is harder work, but worth it for the unashamedly masculine joy of NOT wearing a papoose. https://t.co/3liJ4CZJGG
— Piers Morgan (@Piers Morgan)1539634991.0

Wait, there is a feminine joy and a masculine joy? Wow, I did not know that emotions were gender specific. I wonder if these ridiculous statements from Piers are his definition of "masculine joy."

Do you have a view about papooses, Mr President @realDonaldTrump? Everyone else seems to be getting very worked up… https://t.co/TNcNZZkdZb
— Piers Morgan (@Piers Morgan)1539635072.0

If you weren't thrown off by anything yet, this might be what does it. Piers decided to bring President Trump into this irrelevant conversation. All of this is getting entirely out of hand.

Clearly, Piers is not open to changing his mind about papooses anytime soon. I guess he will always see them as ridiculous instruments made for weak men. Someone needs to give this man a hug.

An exception to the rule

I guess we found Piers' weak spot: defending UFC fighters. Apparently, it is only okay to wear one if you are a professional fighter, which just makes no sense at all.

His own biggest fan

Piers has his own back, even if no one else does. Apparently, he thinks he is James Bond material simply because he can wear a tux. I don't think anyone would watch these movies.

Piers brings a baby doll to a red carpet event to prove his point. That's probably the creepiest way to show everyone that you're right, or to reinforce the fact that you're terribly wrong and maybe a little crazy.

The daily talk show got involved.

The morning show that Piers Morgan co-hosts got very involved and appeared to agree with the Twitter world that Piers' opinion is a little outlandish. One man even offered to donate a good chunk of money to charity if Piers would give in and wear a papoose.

Women do fancy a man in a papoose!

Piers claims that women are not are not attracted to men in papooses, but both of his co-hosts disagree.

But have you seen Tom Ellis?

This is the man they were referring to in that last clip. We can all agree that this is a picture most men or women, would be a big fan of.

You deserved that Piers

The staff disagreed with Piers, making him stand alone in his opinions. But no disagreement is fully settled until someone gets pied in the face.

Daniel Craig, and everyone else must have had this reaction. Justice really is served.

Entertainment at its best

Viewers loved it, some even called it "bloody hilarious" in their classic, British response.

Happy Tuesday to Daniel Craig and his deliciously daggy Dad outfit that somehow is hotter than that famous pic of h… https://t.co/ClwODjv7m1
— Rebecca Sullivan (@Rebecca Sullivan)1539635957.0

Women are still swooning over Daniel Craig, even when that he carries his baby in a papoose. Daniel's reputation seems as perfect as it has always been.

Yup. Still love him. Always have, always will. Maybe even more so now.

There you have it, folks. Daniel Craig is still manly, papooses do not correlate to masculinity and dads loving their babies will always be important. Share the good news with your friends and go strut your stuff in a papoose.