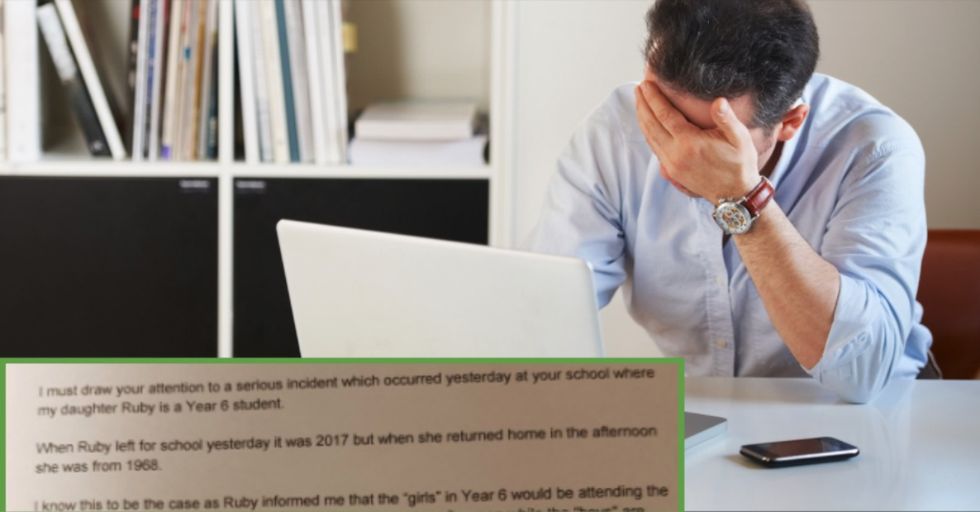 It's 2017 and in many ways, we're basically living in the future. Texting is already 25 years old! You can do mud runs with your dog! There are buttons on most microwaves specifically for popcorn. Clearly, we've come a long way.

Unfortunately, it seems that some organizations and institutions seem to still be rather stuck in the past. Such is the case in today's story about a school in Australia that has some pretty wacky ideas of the kinds of activities kids want to do to celebrate the end of the year.

Dubbo West Public School is located in New South Wales, Australia. At the end of the year, the tradition is to treat the students to a day of fun activities.

Apparently, the tradition is also to have two separate activities — one for the boys and one for the girls. The male students are brought to a warehouse called Bunnings for a DIY wood workshop.

The girls, on the other hand, are brought to the school library for lessons on how to do their hair and makeup.

Stephen Callaghan's 12-year-old daughter Ruby is one of the students at Dubbo West Public School. Callaghan was appalled by the school's "tradition" and took it upon himself to craft the following letter:

The letter reads: "I must draw your attention to a serious incident which occurred yesterday at your school where my daughter Ruby is a Year 6 student. "When Ruby left for school yesterday it was 2017 but when she returned home in the afternoon she was from 1968. "I know this to be the case as Ruby informed that the 'girls' in Year 6 would be attending the school library to get their hair and make-up done on Monday afternoon while the 'boys' are going to Bunnings. "Are you able to search the school buildings for a rip in the space-time continuum? Perhaps there is a faulty Flux Capacitor hidden away in the girls [sic] toilet block? "I look forward to this being rectified and my daughter and other girls at the school being returned to this millennium where school activities are not divided sharply along gender lines."

Obviously, this practice of gender-specific end-of-year activities makes basically no sense at all. We can see why Callaghan started to wonder whether he was somehow transported to the past.

Some people appeared to have missed the point of Callaghan's letter.

This brings up another point. Why are there two activities in the first place? Why can't the school provide an activity that all the students can enjoy together? What exactly is accomplished by this tradition where students can only celebrate with half of their classmates? Apparently, Callaghan isn't the only one who has experienced this kind of stuck-in-the-past thinking. Other Twitter followers soon began weighing in with their own experiences of outdated sexism.

Like this woman who attended a girls' high school that offered classes in home economics and sewing, but none in woodworking or engineering.

Because only men ever have to use a hammer, you know. And they don't have to know how to do laundry, either.

Again, offering a "makeover day" isn't the problem here. It's deciding for the students which activity they'd rather participate in rather than giving them a say in the matter that's completely backward.

Callaghan allows that the school isn't trying to be malicious in its separate party policy.

But isn't that almost worse? It's these examples of everyday sexism that shape kids' (and adults'!) perceptions of the world and keep the outdated practices going into the future. Without parents like Callaghan to call out institutions participating in this everyday sexism, nothing changes, and the world is worse as a result.

After receiving an outpouring of support from Twitter, Callaghan wrote the following message:

He said that Ruby is getting to the age where she's noticing that some people try to tell her what she can and can't do based solely on her sex. We're better than that, right? We have to be.

Because we're living in the future, and there's no place in the future for outdated sexism. There are plenty of problems left to solve and we need all hands on deck. Girls' hands included.