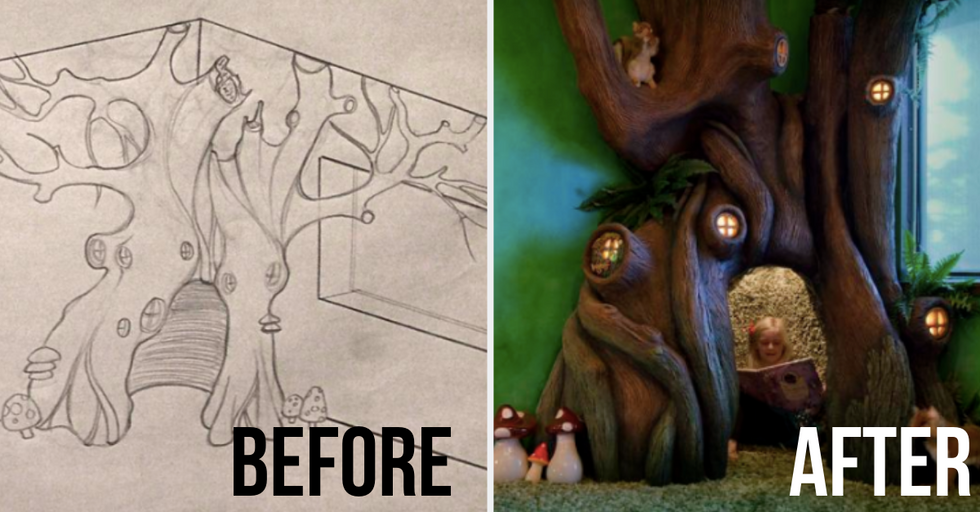 Most little girls dream of living in a fairytale, and one young girl was lucky enough to have that turned into a reality.

When you're little, your bedroom is a sacred space. It's the place where you can be away from everyone and disappear into your own imagination - whether it be playing with your toys, drawing, writing in your journal, or simply daydreaming. There's nothing better than having your own bedroom when you're a little kid.

But one father and Reddit user, radamshome, recently shared how he transformed his daughter's bedroom into a literal fairytale come true. Whatever you're thinking it looks like - just wait. It's even better! He spent a grueling 18 months completely renovating her bedroom and let's just say that the end results are truly out of this world.

Make sure to read until the very end of the article to see the finished result! You'll be totally floored - it's that amazing.

Everything starts with an idea.

Radamshome shared how he came to build his daughter an amazing bedroom. He explained that she really wanted a "fairy tree" in her bedroom where she could sit and read her books, as well as climb it and sit at the top. Talk about ambition! He explained that he made around a dozen sketches of the structure before actually getting down to work.

He explained that his daughter wasn't very excited about her room before. He said that it definitely needed a makeover!

And boy, did he get down to work!

Aside from the sketches of the tree, he also made 3-D sculptures prior to actually building it. "I used Sculpey modeling clay and some plywood cut in the dimensions of her room," he explained about this process.

Time to get to work.

First, he had to draw the silhouette of the tree model onto his daughter's wall. Sounds easy, right? Wrong. I know if I did this, I'd mess it up about 100 times before getting it right...

He explained that as soon as he was done drawing the silhouette onto the wall, he was able to get building. "I mostly used 3/8" rebar and 1/8" steel rod from scraps, or Home Depot," he explained. "To make the tree climbable, the frame needed to be pretty strong. So I over-engineered it to easily support 3 adults, even though it would only ever be used by little kids. As I worked, I'd hang on the different parts, testing for strength."

Watch out for sparks!

He explained that he actually found his old welding teacher on Craigslist! He ended up taking a one day class to learn from her and said it helped him a lot in the construction process.

It's all coming together...

He explained that he spent 100 to 120 hours on making the skeleton of the tree alone.  That is one dad who loves his little girl a whole lot! This isn't a simple DIY, overnight project.

Someone is ready to move in.

In order to make the "skin" of the tree, he used "expanded metal lath." He said it was a lot easier to use than wire screen. At this point in the process, he said he was about 175 hours in.

Next up: concrete. "The formula I found worked best was 2 parts portland cement, 1 part water, 1 part polymer fluid. This fluid can be bought from 'Something Better Corporation' online. They also have some videos on youtube showing how this is mixed and applied," he explained.

He also used paper mache for the outer branches, since the concrete was giving him trouble for those parts of the tree.

Then, it was time to paint! "This was a big milestone in the project and something I was really looking forward to," he wrote. "But I have very little experience painting, other than Warhammer 40K miniatures from when I was about 17. So, I decided to paint it exactly the same way! (At this stage I was about 225 hours in)." 225 hours, people. That. Is. Commitment.

He explained that in the same way he would paint his miniatures, he painted the tree first with a dark coat, and then lighter colors.

For the shimmering colors, he actually used rit clothing dye. A tiny bottle of colored ink was going to be way more expensive, so realizing that rit dye worked was a gamechanger. He spent less than $20 on the dye and the end result is incredible.

Well, who's ready to sob? "I kept this picture of her in the room to help me through the tough parts," he wrote. I'm not crying, you're crying!

The tree wasn't the only change in the bedroom!

It was time to paint the walls as well. Those bright colors are everything. This little girl knows her style and I'm here for it.

Who doesn't want to have a magical, fairytale tree in their bedroom for cozy afternoons spent reading and dreaming? This guy needs to go into business specifically for creating magical bedrooms.

Hardwood floors are a must.

But he kept an area by the tree for carpet.

I can't imagine cutting hardwood floor is an easy task. "I'd pre-drawn this curve on the sub-floor. Then I used a jigsaw to cut each piece of hardwood before nailing it in, to get this curve shape," he wrote of this part of the process.

It's all in the details.

As if building a giant tree wasn't hard enough, he also went all out for the details that truly make the room special. For instance, crafting fairy windows and "glass" for the tree.
"I used watercolor paint to add the dirty brown look to the paper. The light would then shine through and make the windows look 'old timey,'" he wrote.

Okay, this is seriously cool.

A fairy window that is serving some FernGully realness. If this was my bedroom  I would truly never leave. There is nothing cozier or cooler than having a fairy window in a tree in your dang bedroom.

The details! It's too much!

Attention to detail really takes this room to the next level. "A trip to the local Michael's craft store yielded some good details pieces for the door. I found the doorknob at Anthropologie. I made the big gold hinges from Sculpey and painted them with Testors paints," he explained.

Flowers are a must.

It wouldn't be a fairytale tree if there weren't some gorgeous flowers adorning it. Michael's, to the rescue! Michael's is very similar to Target. You can never just go in and buy one thing...

He explained that there are a total of five bird's nests in the tree. Keep reading to see the finished product!

There are even butterflies on the tree! Magic is real, y'all.

This is the ceiling.

There are no words. "I wired 6 series of 50 standard Christmas bulbs in parallel. They're controlled by a dimmer by the door, (I'd pre-wired for these through the branches) and when turned all the way down, look just like stars. In this picture, they're turned to about 75%," he said of the lighting. And now...behold...

He explained that overall, he spent around a total of $4,250. It also took about 350 hours of his time to complete. He worked mainly on nights and weekends over about 18 months.

And it was so worth it.

He also explained fire safety regarding the project. "I consulted with both a private fire protection engineer and a residential fire prevention specialist from my city's fire department to ensure I didn't create a fire hazard."

How amazing is this?

His daughter even has her own reading light inside the tree! Can I be that little girl?

That top sitting area is so cool.

The woodland creatures add such a sweet, charming touch to the entire project. Major bedroom goals.

This little girl is living her best Disney-princess life.

It's also so cool that her dad shared his entire process. His transparency regarding the project is incredibly refreshing and also inspiring!

Who else wants to hire him to re-do their room?

What an amazing project! Well done, Radamshome! Share this article with a friend who loves DIY home projects!