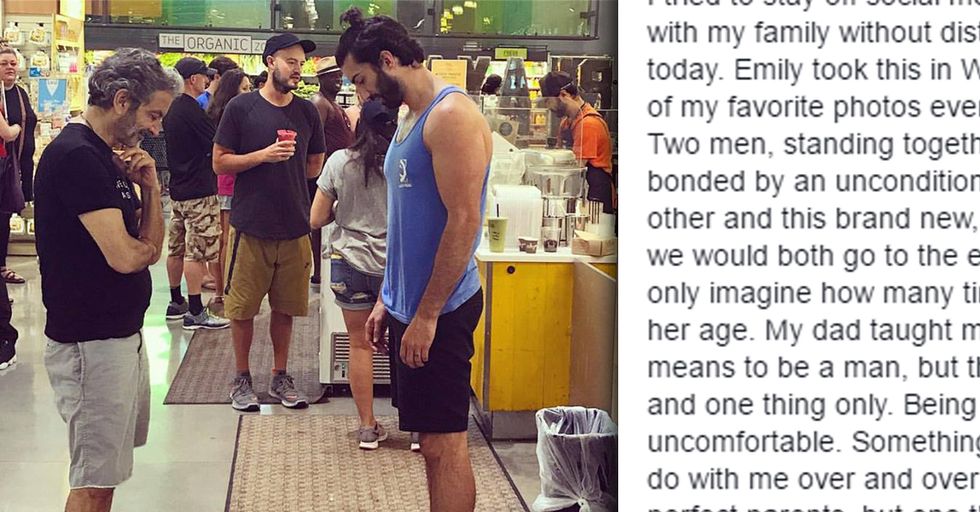 Toddler tantrums are as common as a sunrise (and often, just as spectacular); yet despite the fact that every parent has dealt with countless meltdowns by the time our kids reach toddlerhood, few things make us more uncomfortable than dealing with one in public.

Kids are often at their most over-tired and over-stimulated when you're out and about, plus errands are B-O-R-I-N-G, making places like the grocery store prime locations for potential tantrums — throw in the fact that they always keep the candy and other temptations right at kids' eye-level, and it's actually a little surprising that more kids don't freak out before their parents reach the checkout.

Most moms and dads spend the duration of their child's tantrum horribly embarrassed, wishing a hole would open in the floor and swallow them whole, imagining every other shopper judging their "terrible" parenting and casting dirty looks their direction. But one dad recently posted his own touching take on the tantrum, and while some people strongly disagree, the rest of us are breathing just a little easier.

Justin Baldoni might be best known as the actor who plays Rafael on the CW show Jane the Virgin, but in real life he's a doting father to his daughter, Maiya.

They say celebrities are just like regular people, and if nothing else we now have confirmation that, at the very least, celebrities' kids are definitely regular kids. This was proven when Baldoni, his wife Emily, and his dad took little Maiya to Whole Foods.

This is the photo Baldoni posted to Facebook, and for the most part (at least the part that's kicking and screaming on the floor) it looks pretty familiar to parents.

Who knows what set Maiya off (as if a toddler even needs a reason), but what's most remarkable about the picture is the reaction from Baldoni and his dad. In his caption, Baldoni reflects on the incident: Emily took this in Whole Foods. It's now one of my favorite photos ever of me and my dad. Two men, standing together in silence, forever bonded by an unconditional love for both each other and this brand new, raw and pure soul who we would both go to the ends of the earth for. I can only imagine how many times I did this when I was her age. My dad taught me so much about what it means to be a man, but this post is about one thing and one thing only. Being comfortable in the uncomfortable. Something I grew up watching him do with me over and over again.

Being "comfortable in the uncomfortable" isn't something that most people are, well, comfortable with, but Baldoni goes on to explain why it's so important to his parenting philosophy — a philosophy he learned from his dad.

There are no perfect parents, but one thing my dad taught me is to not parent based on what anyone else thinks. My dad always let me feel what I needed to feel, even if it was in public and embarrassing. I don't remember him ever saying "You're embarrassing me!" or "Dont cry!" It wasn't until recently that I realized how paramount that was for my own emotional development. Our children are learning and processing so much information and they don't know what to do with all of these new feelings that come up. I try to remember to make sure my daughter knows it's OK that she feels deeply. It's not embarrassing to me when she throw tantrums in the grocery store, or screams on a plane. I'm her dad…not yours. Let's not be embarrassed for our children. It doesn't reflect on you. In fact…we should probably be a little more kind and patient with ourselves too.

"I love how you're standing over her. As if to say, 'I've got you little one. No matter in your weakest state. Daddy will always protect you.' I love it," said one fan.

Most talked about how his post had given them a new perspective, and more confidence for dealing with the (inevitable) next tantrum.

"Justin, I want to thank you for that post," this mother wrote. "I am a believer of letting my children feel their big emotions. I have been so worried about flying with all three of them alone for the first time this week: 7, 3, and 1 yr old. But you're right! I don't need to worry about the others on the plane. I just need to worry about mothering and loving them as I always do, and that doesn't change just because I'm in close quarters with strangers. I appreciate your encouragement!" It can be tough to shake off the stares and perceived judgement of strangers, which is why so many moms and dads said this post was exactly what they needed to hear. But, the Internet being the Internet, there were also people ready to tear Baldoni to shreds.

Like the reaction of this person, who thinks it's more important to toughen kids up as early as possible.

"Such liberal bullsh*t," he rants. "How about teaching your kids how to behave in public? My kids got to go almost everywhere with me, understanding that you must respect other people. This 'all about me' method of parenting is a precursor to the child's failure to respect authority in school, at work and society. It can be traumatic to realize you can't get everything you want ..... better to have that reality sink in sooner than upon reaching adulthood." I'm not at all sure what being liberal or conservative has to do with anything, but it just isn't Facebook without somebody bringing up politics in the comments, I guess.

Other people who disagreed were a little more straight forward.

"Freaking out in public places shouldn't be normalized," one person argued. "Sure, you don't need to make a kid feel BAD for feeling strong emotions but lying on the floor at the grocery store is simply not acceptable behavior." Of course, anyone who's ever raised a child (or who's ever heard the term "terrible twos") knows that freaking out is normal behavior for a toddler. Maybe parents just shouldn't leave the house until their kids are in middle school? Or we should drag our children out of the store while they're kicking and screaming and probably smacking us a hundred times with their flailing arms — would that be more acceptable?

Especially considering, as one parent pointed out, that there can be other circumstances we're not aware of.

"I love this! It couldn't be more true. Especially as a mother of an autistic son," one mama raved. It's all too easy for people to forget that, while a child having a meltdown might seem like a spoiled brat (another accusation that went flying around the comment section quite a bit) to an outsider, conditions like autism, processing disorders, and other medical or emotional issues could easily be at play. Plus, like I said, TERRIBLE TWOS. They're real, they're terrible, and they absolutely do not end at age two.

In any case, the vast majority of people saw Baldoni's post as some serious #parentgoals.

"I remember being in a checkout queue and watching a similar scene with a dad standing over a child on the floor having a tantrum," one woman recalls. "When the child had calmed himself enough the Dad simply asked 'What has upset you?' The child replied 'I can't remember,' and smiled. They hugged and went on their way. I remember thinking 'I want to be that sort of parent.' I hope I am." I have five kids and I'm not quite there yet, but I want to be that sort of parent someday, too.

But perhaps the greatest observation on the post was this one:

"The other thing I love about this picture is that I noticed the world continues to move on as the two of you are standing there," she notes. "As parents, we often feel as though everyone is looking and judging, which makes us react instead of respond to our children. Sometimes they are, but more than often, people are too busy with their own stuff to notice what's going on with us." I hadn't noticed the first time I saw the photo, but it's true. Right at that moment when a parent's face is usually burning the hottest and we're just sure someone in Aisle Two is cursing our "liberal" or otherwise inadequate parenting, it turns out...no one is paying any attention. Judging by the fact that this comment was propelled to the top of the comment thread by over ten thousand likes and hearts, it had a pretty big impact on other parents out there, too. Still, the Funniest Comment award goes to someone else...

One person cut through all the BS and put out there what so many people were really thinking.

"Everyone is debating parenting philosophies, and I'm squigging out because her face is directly on the floor in a public place." Fair enough. It sure is. Ewww.