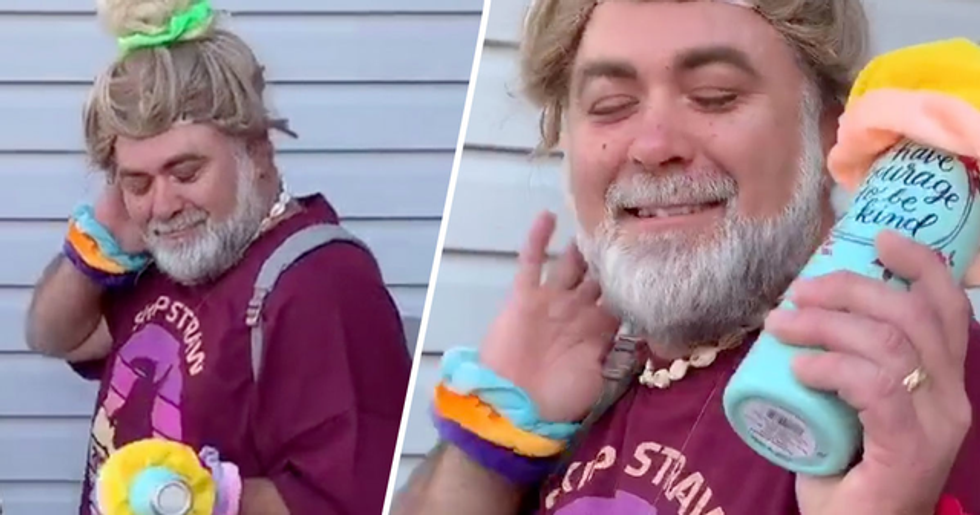 When it comes to Halloween costumes, it's always good to go for something topical. Basing your look around something everyone is talking about is a sure-fire way to find costume success. And one dad has gone viral with what must surely be the best costume of Halloween 2019 - a VSCO girl.

His look was on point, with scrunchies, an oversized t-shirt, crocs, and a hydro flask - but even better, he managed to utter all of the classic VSCO-phrases. The video shared on Tik-Tok (where else?) is total perfection.

Let's start at the beginning.

What is a VSCO girl? Well, the name comes from a brand of photo-editing software that creates a particular aesthetic for Instagram pics.

But it's expanded to mean much, much more.

A VSCO-girl doesn't just edit pictures a certain way. They also tend to like a few particular items, which are basically a part of the uniform.

In fact, VSCO culture is so widespread that it's now basically become a parody of itself. Phrases like "sksksk" and "... and I oop!" are another part of the uniform.

Soft, pastel colors, scrunchies, and friendship bracelets are all essential.

A relaxed, beachy vibe is also part of the VSCO aesthetic. The look is so homogenous that it's ripe for mimicking.

With just a few small details ...

You can easily put together a perfect VSCO-look - as one dad from Kansas discovered.

He's been doing the rounds on social media.

Thanks to this absolutely flawless take on the VSCO-girl look. From the topknot to the beads to the oversized "save the turtles" tee, it's safe to say he nailed it.

But there is even more attention to detail.

For example, putting scrunchies around his hydro flask? Iconic.

Alongside the VSCO-girl look, the girl's mom dressed up as an "eboy" - again, to totally perfect effect.

These looks have it all.

And they're getting a very positive reception online. Hey, what would you expect from iconic looks that pay homage to the online world?

The transformation is impressive.

The contrast between these regular parents and the internet sensations they embody is stark.

The dad particularly nails it.

The leggings, socks, and crocs combo is what VSCO-dreams are made of!

And what's even better?

The way these two teen archetypes interact. There's some very cute flirting going on between this mom and dad.

The videos were shared on TikTok.

Because there would be no better place for VSCO-content to be shared, right?

They were shared by a genuine VSCO girl.

She posted the videos with the caption, "My mom and dad are the coolest😂🖤 make them tik tok famous!"

And it seems she's got her wish.

"I had to find this from Twitter because it is absolute perfection," wrote one commenter. "HHAHHAHAHAHA IM SENDING THIS TO EVERYONE I KNOW OH MY GOD," laughed another.

This idea was so ingenious, we can't believe more people didn't think of it!

Although there was this problem.

As huge as the VSCO girl phenomenon is, there are many who just wouldn't "get" the references here.

But the VSCO girls out there?

Well, it's pretty clear they loved this dad's cute homage to their culture.

We think it's safe to say this dad won Halloween this year.

But for more amazing Halloween looks, keep on scrolling. Celebrities did not let us down this year, and we've collated forty of the best outfits.