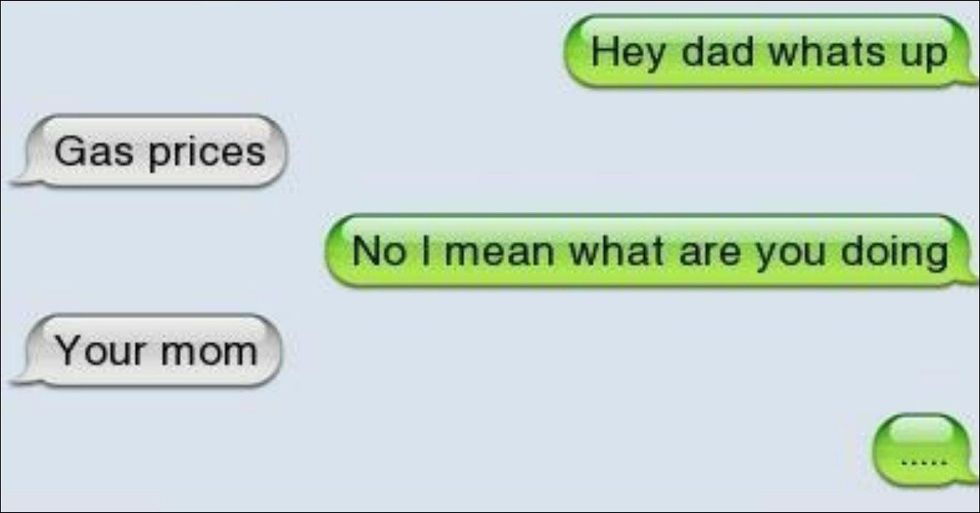 30 Dads Who Are Better at Texting Than You

Dads. They helped bring you into this world and are still trying to figure out how to navigate that world through technology — specifically smartphones.

Now they often use texts to send their corny humor and valiant attempts at communication instead of a phone call, and as they say, father knows best...

Just be your normal, glittering self. No, scratch that. Just grow a pair and man up.

Maybe a unicorn? At least dad is there to remind you to set the bar low.

Not to mention throw out the jokes.

No fowl play was involved. However, a few feathers were ruffled at dinner.

There's no extra charge for the advice, but what if they want extra gauc? Never mind. They're not at Chipotle.

You can't go wrong with a classic.

Dude really went for the gold with that one. Yes, everyone has heard the tuna piano version, but adding in glue? Extra points.

They help calm you when you're scared.

She kind of had it coming. I mean, it's a moth, not a grizzly bear.

And they won't take any crap.

Don't tell him how to live his life, but if you do get blood on your clothes, you're in charge of laundry this week.

But those crazy message programs can be tricky! Especially if you're on the crapper.

They'll stick by you no matter what.

Even if you're silently plotting a crime, they'll always be there with sage advice and tips. But the less they know the better...

And help you live your best life.

Maybe he's studying whether "liquor before beer, in the clear" is really true or not? You don't know.

That includes eating a rounded diet.

It looks like dad might need some help with his emoji translations. Or he's drunk, and most likely hanging out with that dad of the nerd up above.

They always check in when you're out.

Not to mention provide for all your needs.

He's always there to provide food, shelter, support and a groan-worthy dad joke or two. LOL.

Some have eclectic tastes in music.

Well, that escalated quickly. We went from Let It Go to "when I die I hope you and your sister can be friends again." That's a lot to convey in a text. But love the songs!

And make sure that they're not grandparents a little too soon.

Then also make sure you get some Neosporin for that epic burn. Although maybe his looks are genetic...

They're always good for a corny joke.

The bigger question here isn't about the joke, although it's great, but what does it mean if "in theory" a toaster was delivered? So many questions.

Ba-da bing! He walked right into that one.

They try to give you your space.

Maybehejusttalksreallyfastandthat'showhewantstoconveythings. No, he just needs to find the space bar.

Well, you asked. And then you instantly regretted asking. Have fun getting that visual out of your head.

They encourage your athletic pursuits.

They keep you up on current events.

And then make you crap your pants with anxiety before telling you another corny joke. Not cool, dad. NOT COOL.

Even if they're busy at work themselves...

Maybe. But the question is, "Is he in a meeting?"

That's just how they roll.

I guess it's better than him saying, "Sometimes, when I get nervous, I stick my hands under my armpits and then I smell them like this!" SUPERSTAR!

Well, sometimes autocorrect rolls them over.

I think he meant "attic," but to be on the safe side, mom better get to a doctor. ANUS!

And that having a diploma in an unmentionable place was probably the least of her worries. That had to sting — the bees, I mean.

Or maybe they just use it as an excuse.

After all, autocorrect only picks up on words that you've used a few dozen times. Nice try, dad. Now go and pick up the little assholes.

Either way, they're quick with a quip.

Maybe start filling out those financial aid forms about now... Then again, just live at home and mooch as long as you can.

They're versed in many languages.

Along with English and Spanish, they've also picked up a bit of sarcasm and dad speak that includes some outdated lingo.

But remember, they'll do anything for you.

As long as you remember that they're also your biggest fan — even if they're better at texting than you.