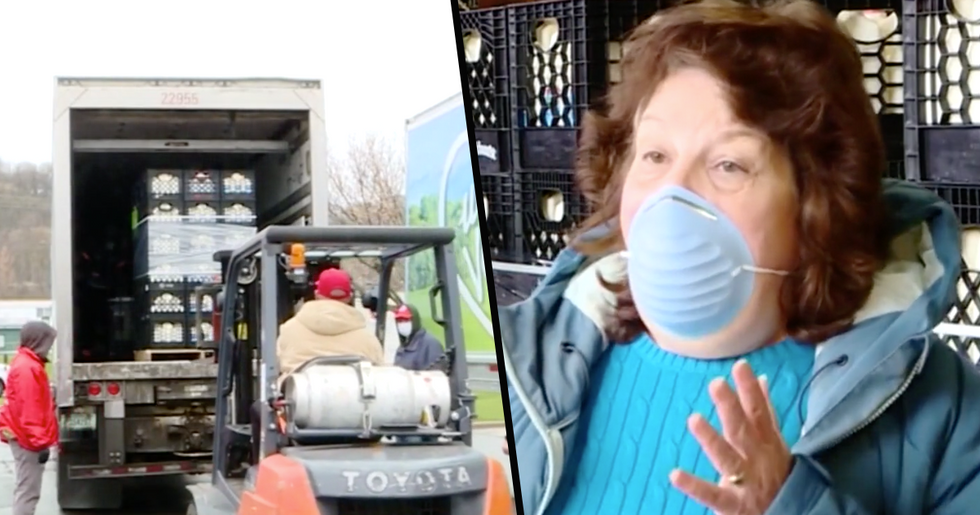 Dairy farms in New York have made the generous decision to donate their unsold milk to the less fortunate rather than dumping their gallons of leftovers.

Dairy farms in New York have selflessly donated their unused milk to those who are in need...

And this type of kindness is exactly what our country needs right now.

As of today, the United States has more than 990,000 cases of the deadly virus.

This also includes 55,843 known deaths - the highest number of deaths in one country.

And without a doubt, we have become the hardest hit as of 2 months ago.

New York is now the hotspot for pandemic cases here in the States.

These numbers are terrifying...

And they don't seem to be slowing down any time soon.

Millions of jobs have been lost thanks to the pandemic...

And it's easy to say that times haven't been this tough for New Yorkers in decades.

But for those who are able to work...

They have been affected massively - especially those working in healthcare. First responders and emergency service workers have been working around the clock in a desperate bid to help keep the numbers at bay.

But we have been trying through a series of public tributes to their essential workers.

New Yorkers have been keeping their spirits high...

And they have been doing a whole range of things to try and stay united together.

People have also been using the hashtag "Clap Because We Care"...

Every evening at 7 pm, everyone in New York City takes part in a round of applause, and even though this won't magically make the virus go away, it shows people that they aren't alone during these dark and dangerous times.

It is remarkable to see this beautiful city be filled with cheers and rounds of applause...

And this truly restores our faith in humanity.

The unity in New York is stronger than ever, despite their climbing death rate...

And some of New York's finest dairy farms have decided to get involved.

Dairy farmers in Syracuse, New York, have recently realized the amount of milk they waste every month...

And rather than dumping the unsold milk, they decided it would be better off being donated to those who can no longer afford to buy their essential groceries.

Many dairy farms are usually left over with lots of unsold milk...

So it makes sense to donate the produce that is left over.

The milk is being delivered to families in need on a once-a-week basis...

It’s a small gesture that ends up doing a lot of good.

And last week, the farms donated 7,700 gallons of milk in Syracuse alone.

Thousands of cars lined up at a Destiny USA parking lot on Wednesday to get the free milk, which was being passed into cars by farmworkers.

Even though this didn't exactly stick to self-isolation rules...

So many families were able to get their hands on some essentials, many of which are now struggling massively to make ends meet.

You can watch the footage here...

And make sure to keep scrolling to read about America's "Quarantine Quitters"...