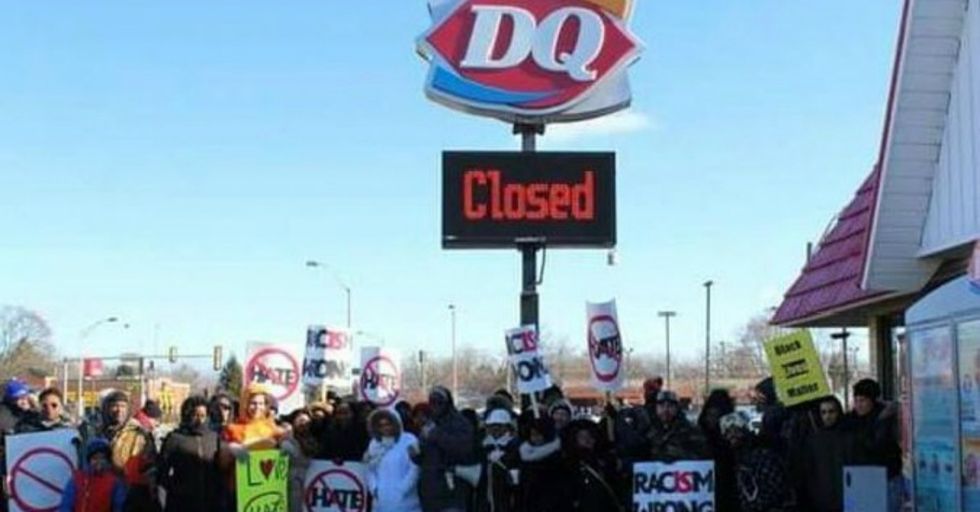 Dairy Queen was forced to shut down a restaurant this week following an instance of racism that has the public uniformly up in arms over a store owner's behavior.

When one thinks of ice cream parlors, chain or otherwise, one generally thinks of a hospitable, pleasant place.

Because...why wouldn't you? They're family establishments that cater predominately to kids' outings. In fact, ice cream parlors might be one of the most wholesome enterprises a person could think of.

I mean, who could imagine an ice cream parlor being a hostile environment?

Is nothing sacred? The only beings that might object to ice cream parlors are cows and...possibly vegans. Otherwise, they're a place you go when you want to feel safe and secure.

However, rules are made to broken, and one ice cream parlor in the midwest is the subject of such a scandal that it's one owner has cast a cloud over the entire brand.

While not everyone may have a Dairy Queen close at hand, the franchise is incredibly well-known and populates the entirety of the US, more or less. They're predominately rural or suburban, which doesn't mean anything in and of itself but serves to show they are often meeting points and popular locals spots.

However, that designation changed in an instant for one outpost in Illinois.

What was seen as "just another Dairy Queen" by locals and passersby alike became ground zero for controversy and outrage following the treatment of a customer.

On Wednesday, January 4, Deianeira Ford, pictured here, thought she'd make a trip to Dairy Queen with her two young kids since they'd been so well-behaved.

She got far more than bargained for upon arrival and ultimately gained notoriety for all the wrong reasons when the story of her and her family's treatment surfaced.

They stopped at the drive-thru at this DQ in Zion, Illinois, where her order got mixed up.

When she asked the restaurant's owner, Jim Crichton, to fix the order, he wouldn't. So she asked for a refund. This is when he lost control. While he refunded Ford for the order, he also let loose a string of racial slurs directed at Ford, in front of her children. Ford told The Washington Post, "He called me and children n——; he said I can go back to where I came from."

The scope of things to be furious about here is enormous.

Not only was she treated poorly just as a customer, but it quickly became clear with just one word that the owner was not only racist but outspoken and cruel in his intolerance.

Remember that this owner LEGALLY has to provide the same service and treatment to people of all races.

Yup. Even if he's a terrible racist, which I suppose is his business, he still has to exercise the same service and courtesy that he extends to other customers. It's the law, and he can suffer civil penalties for not doing so.

When the officer arrived and confronted Crichton, he was angry and pacing, but he didn't deny what he'd said. In fact, according to the officer, "Crichton boastfully told me he would be happy to go to jail over the issue and proudly admitted to calling Ford a n——. He added that he is 'fed up with black people.'" So disgusting.

While Crichton's behavior was absolutely deplorable, there was little the officer could do.

So Ford took to Facebook. In a now-deleted post, she described what happened and included the phone number and address of the Dairy Queen. She also called DQ headquarters. Hours later, her post had been shared several thousand times, and Dairy Queen got wind of the incident.

DQ denounced Crichton's behavior and said he would be required to undergo sensitivity training.

But that wasn't enough.

On Friday, January 6, Dairy Queen announced that it was closing the Zion restaurant and revoking Crichton's franchise rights.

Dozens of people showed up to the Dairy Queen location in Zion to demonstrate in support of Ford Saturday, January 7, and it turned into a sort of celebration. Ford told The Washington Post that she "was happy about the outpouring of support from community members..." but that she's "still struggling to explain racism to a 3-year-old who doesn't fully understand what happened."

Fortunately, the company acted swiftly and with integrity.

Unfortunately, those actions don't erase the harm done to Deianeira Ford, her children, and the people at large. No matter how Dairy Queen reacted, his actions would remain a blight on their brand and the community all restaurants strive to serve.

Of course, politics and social issues aside, some people just want their Dairy Queen back.

If you need a reminder of the damage that actions and words can do when they're leveraged to propagate hate, look no further than this story. It ruined a man's livelihood (of his own choice, but ruined it nonetheless), and gravely hurt an innocent family who just wanted to step out for ice cream.

The enduring message from the people? It's simple.

Much as the way Crichton showed no tolerance for people whose only trespass was being different, the town and his parent corporation showed they have no tolerance for intolerance. If you're looking for a silver lining...that's it.