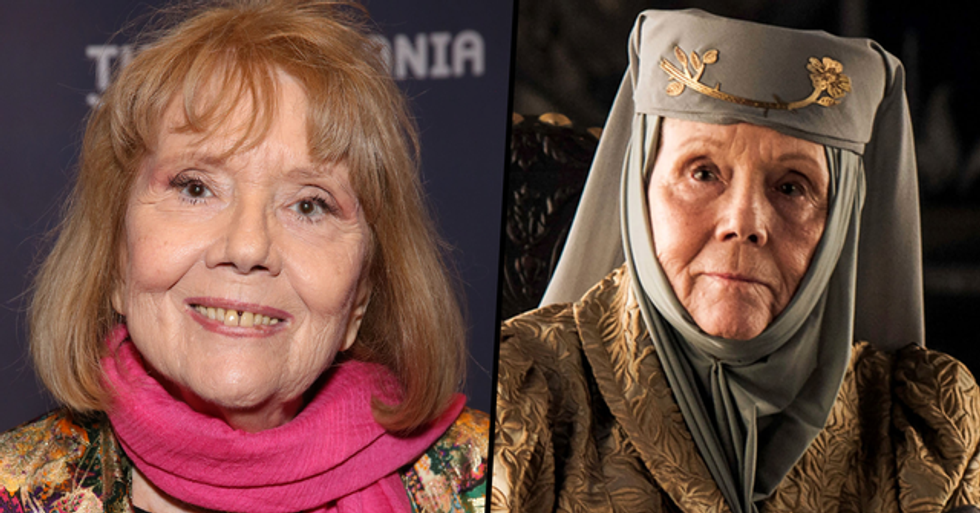 The news has just come in that Dame Diana Rigg has sadly passed away.

The English actor was known for her incredible range...

And was most famous for her roles in James Bond, The Avengers, and Game of Thrones.

Diana dedicated her life to the arts.

Upon leaving school in 1955, she trained as an actress at the Royal Academy of Dramatic Art.

But her big on-screen break wasn't to happen until 1965.

Diana screen-tested for the part of John Steed's female companion in the iconic TV series The Avengers, a role that would ultimately catapult her to international fame.

Following her success on The Avengers, which she admitted having initially struggled to cope with, Diana swiftly moved onto 007.

Starring in Her Majesty's Secret Service opposite George Lazenby...

Diana famously became the only Bond girl to make it down the aisle.

But, despite her on-screen success, her heart still remained in theater.

For the next few decades, Diana took on a number of leading roles with the National Theatre Company at the Old Vic...

And gained a second Tony nomination for her performance as Celimene in The Misanthrope.

She won a number of awards throughout her dazzling career...

In 1990, she won a Bafta for the role of an obsessive mother in the BBC drama, Mother Love. And, 4 years later, she won a Tony for best actress in one of her most acclaimed roles, that of Medea.

But, in more recent years...

She became known as the wickedly blunt Lady Olenna in the HBO fantasy epic, Game of Thrones, gaining an Emmy nomination.

She was truly a timeless actress...

And her role in the fantasy series gained her a whole new fanbase altogether.

So, of course, the news of her death has hit hard.

It was confirmed today that the eighty-two-year-old actress had sadly passed away.

Since the devastating news broke, the tributes have been flooding in.

What to say about Diana Rigg? I could talk about her incredible career, but for now I'll just say as a lifelong fan… https://t.co/lnzgVl0W4H
— edgarwright (@edgarwright)1599747125.0

But now, her family have spoken out.

It turns out that Diana had passed away after a brief battle with cancer.

Her daughter, Rachel Stirling, confirmed the news in a statement obtained by MirrorOnline. “My Beloved Ma died peacefully in her sleep early this morning, at home, surrounded by family," the statement read.

"She died of cancer diagnosed in March, and spent her last months joyfully reflecting on her extraordinary life, full of love, laughter and a deep pride in her profession. I will miss her beyond words."

To remember the other lives lost this year, keep scrolling...