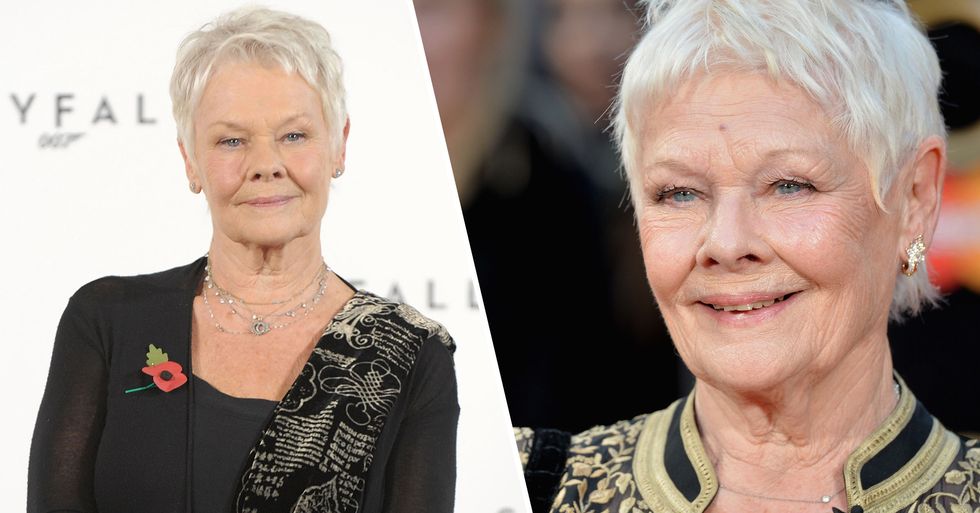 This month, Dame Judi Dench has become the oldest cover star to grace the front page of Vogue at the impressive age of eighty-five.

Only Judi could pull this off...

Dame Judi Dench really has done it all.

The British actress has led one hell of a life and, now, she has achieved something quite remarkable in the world of modeling.

Let's take a quick look at the extraordinary life this woman has led.

Judi launched her acting career in the world of theater.

Born and raised in York, England, as a young woman Judi made the big move to London to study at the Central School of Speech Training and Dramatic Art.

It was here where she would give her first critically acclaimed performance.

Her portrayal as Ophelia in the 1957 Old Vic production of Hamlet, won her a tremendous amount of praise from the critics, therefore putting her on the radar.

Over the next 2 decades, Judi would go on to perform in several theatre productions...

And her performance as Lady Macbeth in the Royal Shakespeare Company’s Macbeth earned her a Laurence Olivier Award from the Society of West End Theatre Managers.

Her work in the arts was truly remarkable.

Yet, throughout all of this, Judi had continuously dabbled in and out of the world of television.

Judi's on-screen debut was in the 1964 The Third Secret, which was shortly followed by performances in other movies such as Four in the Morning, and A Midsummer Night's Dream.

But most of you will probably recognize her best from her role in the James Bond franchise.

Judi portrayed the role of M, the Head of the Secret Intelligence Service, and, pretty much, James Bond's boss.

Judi replaced Robert Brown in the role when she joined the cast in 1995...

And people evidently loved his female replacement, because she continued to portray the character across several Bond movies up until 2012.

And other movies under her belt include...

Murder on the Orient Express, Pride & Prejudice, Roald Dhal's Essio Trot... Oh, and Cats, weirdly. The list could go on.

Did I mention that this woman has done it all?

At the age of eighty-five, there aren't many stones that have been left unturned in Judi's life.

But recently, she has ticked off another remarkable feat...

Because, this month, Judi has broken a record in the world of modeling.

Now, despite her undeniable good looks...

And despite the fact that she looks incredible for her age, Judi has never dabbled much in modeling.

It is one of the star-studded industries that Judi has, over the years, left firmly alone.

Because who has time for modeling when you're such a celebrated actress?

But, now, Judi has made her modeling debut.

And it is on the cover of the mogul of fashion.

The actress is to appear on the June edition of the infamous magazine, and she has made history by doing so.

At the age of eighty-five, Judi is officially the oldest ever cover star for British Vogue.

And, for a magazine that has been running for over a hundred years, this is a truly remarkable achievement.

The June edition will include a lengthy interview with the actress...

And will cover all aspects of her career, which spans for sixty years.

Rumors of her retirement also come up...

But you will all be pleased to know that it certainly won't be happening any time soon. "Retirement? Wash your mouth out."

She also talks about how she is self-isolating during the pandemic...

And gives an insight into her quarantined life. The June edition of Vogue will be available to buy next month, but you can have a sneak peek at the interview here. For more iconic Vogue covers, keep scrolling to see Lizzo's explosive appearance...