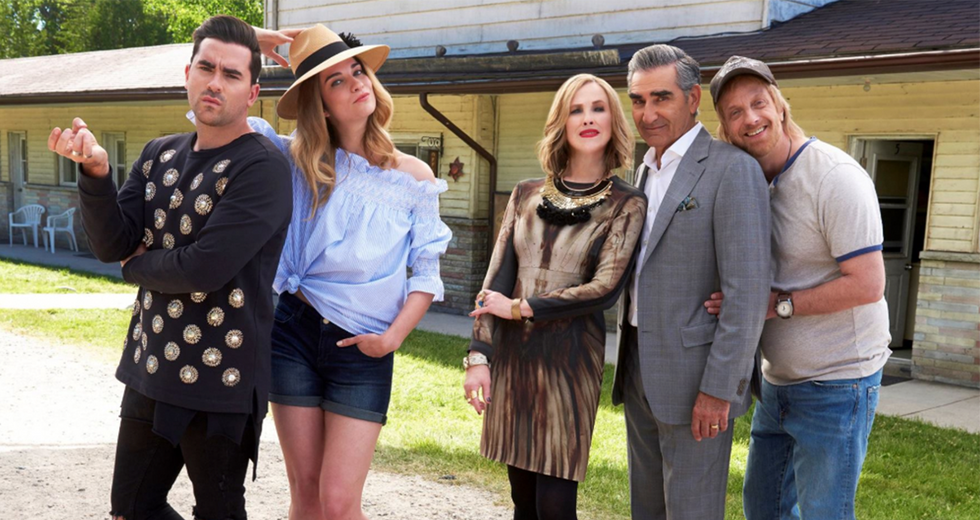 Have you ever felt so connected to a television show that you feel as if you know the fictional characters? Even though they're not real, you love them the way you love your best friends and family. They jump off the page, out of our TV screens and slam directly into our hearts. That's the beauty of storytelling. Something like a TV show can feel so real and have a true impact on our lives. I mean, hello - hence the reason why The Office never gets old and I still sob during the "Booze Cruise" episode.

If you can't tell, I'm a fan of television. So when I was told to watch Schitt's Creek, Canada's sleeper hit from comedic legend Eugene Levy and his son Dan Levy, I of course obliged. But I had no idea that I was signing up for falling in love with the Rose family and the town of Schitt's Creek.

If you weren't aware, 'Schitt's Creek' is the best show ever.

In the very first episode, we meet the once insanely rich Rose family who has recently lost all of their money. Truly tragic.

But there's one asset left that they didn't lose...

The small town of Schitt's Creek, which the Roses purchased as a joke years prior to losing their fortune. They move to a motel in the tiny, middle-of-nowhere town.

As well as so many touching moments - that's the great thing about this show. For the past five seasons, it's made us laugh so hard, but it's also made us weep gently.

The Roses are incredible.

There's Johnny Rose, played by Eugene Levy. His humor and wit are truly incredible. And of course, Moira - the matriarch and soap opera actress with fabulous wigs.

And siblings David and Alexis, who begin spoiled and self-centered...

But hello character arcs. Not to mention all of the locals of Schitt's Creek that have wormed their way into our hearts.

And precious, sweet Ted, the town veterinarian and Alexis' love interest. Also, Roland and Jocelyn (the mayor and his wife) are truly wild. I want to go to a party at their house.

Basically, it's impossible to not love everyone.

The show premiered in 2015 on CBC Television, but all seasons are streaming on Netflix for your binging pleasure.

'Schitt's Creek' has a cult-like following.

If you're a fan of the show, then you'll probably catch yourself talking in that mid-Atlantic drawl Moira has, or saying, "Ew, David!" every five seconds.

And you constantly swoon over all of the relationships on the show.

How is this show so good at writing characters that we become obsessed with? They cover topics and tackle issues with such truth, beauty and humor. This week, Dan Levy announced on his Instagram that 'Schitt's Creek' was renewed for a sixth season...

Which would also serve as its last.

Cue all of the tears. All good things must come to an end, but does this one have to?

"We are very excited to announce that Schitt's Creek is coming back for a sixth season on CBC and Pop in 2020!" his post began.

"We also wanted to take this opportunity to let you know that we have decided season six will be our last," the post continued. That's where they broke our dang hearts.

I mean, I'm not ready to say goodbye to these goofballs.

Fans left emotional comments on the post that pretty much sum up how all of us are feeling. "I’m glad it’s on your terms, and your creative vision. I’m sad because it’s my favorite and is so beautiful in a time when we need that beauty," one user wrote.

The reaction of the fans is a testament to how wonderful this show is.

"One of the most truly amazing shows on Television today (Netflix for me ?). Very thankful for this show which has brought happiness and joy into my life. Truly will be missed. The Rose family is eternal ❤️," another user wrote.

The Rose family truly is eternal.

This show is so important. While there are so many laugh-out-loud moments, there are also so many things that pull at your heartstrings. It's relatable in a very profound, human way.

The Rose Family will always feel like a family we all know.

And we are so lucky we were able to watch their story. Thanks for taking us to Schitt's Creek, Eugene and Dan Levy! Share this with your friend who is obsessed with the show.