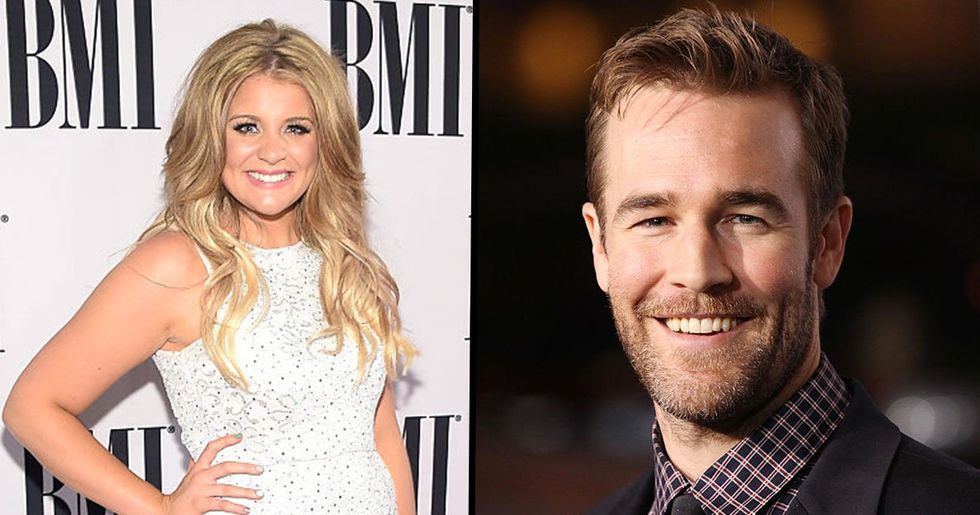 It's that time of year again when we finally get to see which celebs will be putting on their dancing shoes and joining the line-up for Dancing With the Stars.

ABC's reality dance competition, which is in its twenty-eighth season, recently changed its schedule to airing just once a year, meaning that this year's announcement is even more highly-anticipated than ever.

It's set to be a year packed with celebs spanning the big screen, stage, and even politics, and there are also a few things that are being shaken up this time around, making number twenty-eight quite a unique season.

Keep scrolling to find out who's heading to the dancefloor this year...

Dancing with the Stars is back...

The show, which is in its twenty-eighth season, will be gracing our screens this fall with a whole host of new celebs and dancing pros who will be hitting the ballroom.

The radio personality and America Idol mentor took the top spot along with his professional dance partner, Sharna Burgess, beating fellow competitors, Alexis Ren and Alan Bersten, Evanna Lynch and Keo Motsepe, and Milo Manheim and Witney Carson. The pair were fan-favorites throughout the season and were praised for injecting touches of comedy and fun into their routines.

But, this year, the show is undergoing a few changes.

First off, the dance competition is now only set to air once a year, instead of twice.

But there's another even bigger change this year...

For the first time, the pros don’t know who they are paired with yet and fans won’t get to know who’s dancing with who until the premiere. So the whole thing will be one big surprise.

Several of the star pros will be returning this year.

Before the big celeb reveal on Good Morning America, some of the pros who are confirmed to be returning showed us their moves.

Cheryl Burke and Gleb Savchenko were the first to be confirmed.

Val Chmerkovskiy and his wife, Jenna Johnson, alongside Lindsay Arnold and Sasha Farber, were then confirmed to return, followed by Alan Bersten, Peta Murgatroyd, Witney Carson, Emma Slater, Brandon Armstrong, and Keo Motsepe, who are all set to return to the ballroom in September. Most importantly, we all want to know what the celeb lineup for this year is. The big reveal, as always, took place on Good Morning America today. So, let's take a look at which celebs will be heading to the dancefloor...

First up, we have Karamo Brown.

Brown was one of the first to be announced, and fans seem pretty pleased about it, with one Twitter user writing: "He will be getting ALL of my votes. Everyone else can go home," while another wrote: "Yasss!!! My Love."

There's a reason that he's garnered such a huge fan base...

The star is famous for being one of the fab 5 in Netflix's reboot of Queer Eye. Brown is a lifestyle and culture coach in the hit series.

The Bachelorette star had been rumored to be joining the show for a number of weeks now.

The star rose to fame as a former Bachelorette.

The model and TV personality is sure to have her huge Baterlorette fan base behind her when she takes to the dance floor.

Kate Flanery was the next to be annouced.

The star, who you'll probably remember from The Office, is next celeb to be joining the line-up.

Flanery joked that she's excited to get glammed up for the series...

The actress, who's known for playing Meredith on The Office, admitted that, after having “had 9 seasons of the most unglamorous character on TV," she can't wait to get kitted out in the sparkly costumes.

Lauren Alaina is also heading to the dancefloor.

During the cast unveiling, the country singer, who's clearly a huge The Office fan, majorly fangirled over her competitor, Kate Flanery.

This isn't the singer's first time on a reality TV show.

The star was a runner up on the tenth season of American Idol, so she's a seasoned pro when it comes to TV competitions.

Next up is James Van Der Beek.

The actor rose to fame on the drama series Dawson’s Creek, which documented the lives of wannabe filmmaker, Dawson Leery; his best friend, Joey; close friend and slacker, Pacey; and the new girl next door, Jen.

The actor claims to be from quite a musical family.

Ok since James Van Der Beek is on Dancing with the Stars, People Magazine should make him Sexiest Man Alive and com… https://t.co/Jiv7Eiu2vG
— sarah (@sarah)1566392908.0

The star has 5 kids at home and claims that they dance all of the time in his house. So we'll be expecting good things...

The football pro is trading the ball for his dancing shoes as he joins this year's lineup.

The sporting star played all of his seventeen-year professional career for the Baltimore Ravens of the NF, after previously playing college football for the University of Miami.

The singer is known for being a part of the former all-girl group, Fifth Harmony. The group, which gained stardom after coming third in the second season of The X Factor, broke fans' hearts when they announced their split last year.

The singer says that she's excited for a challenge.

The star says that going on the dancing show will be a challenge, but that she's looking forward to taking it on. Plus, being in a girl group, she does have some dancing experience already, so fingers crossed she'll be going far this year.

The basketball star is next in the line-up, although he admitted that, unlike many of the other contestants, he doesn't know if he can sport all of the glitter and sparkles.

Of course, we all know that Odom has hit the headlines for reasons other than his basketball fame...

Not only is he famous for his marriage to Khloe Kardashian, but he also made headlines for his overdose in a Nevada brothel, which caused him to fall into a coma and have a very near brush with death.

Next up is Kel Mitchell.

Mitchell is an actor, musician, and stand-up comedian who's mostly known for his work as a regular cast member of the Nickelodeon sketch comedy series, Kenan & Kel, and as the Invisible Boy in the 1999 superhero satire movie, Mystery Men.

His wife has been helping him perfect his moves...

The next celeb is a little controversial... politician, Sean Spicer.

Donald Trump’s former press secretary will be heading to the dancefloor, despite admitting that he's been told he has "the sense of beat of a steamroller." Spicer has since tweeted: “It’s time to have some fun. Excited to join a great cast and show." Although he previously said that he wouldn't appear on the show - when asked if he would consider competing he said: “It’s no. Zero on the rhythm. I wouldn’t do that to viewers."

He's had a very controversial past.

During Spicer’s tenure in the White House, he came under fire for a number of misleading statements, including the size of Trump’s inauguration crowd, as well as comments that he made claiming that Hitler didn’t use chemical weapons against the German people.

Christie Brinkley is the next celeb to join the cast.

The supermodel has had a pretty impressive career - landing a record twenty-five-year contract with cosmetics brand, CoverGirl, one of the longest modeling contracts in history. The star has also tested the acting waters, appearing in a number of movies including National Lampoon's Vacation (1983) and the 1997 sequel, Vegas Vacation, as well as most recently starring in a guest role on the season 7 premiere of ABC's The Goldbergs.

She's also famous for being married to a very well-known singer...

The former model was married to music legend, Billy Joel, although the pair split in 1994.

Finally, we've got Mary Wilson from The Supremes.

The legend was the last to be announced - and she was announced separately, as a special addition to this year's cast.

The legend says that the show will make her a "cool grandma."

Wilson is best known as a founding and longest-standing member of the Supremes, whose original members were made up of Wilson, Florence Ballard, and Diana Ross. Once the full line-up was revealed, Dancing With the Stars judge, Carrie Ann Inaba went as far as to say that this is the “best cast yet." Dancing With the Stars will hit screens on Monday, September 16 at 8 p.m. on ABC.