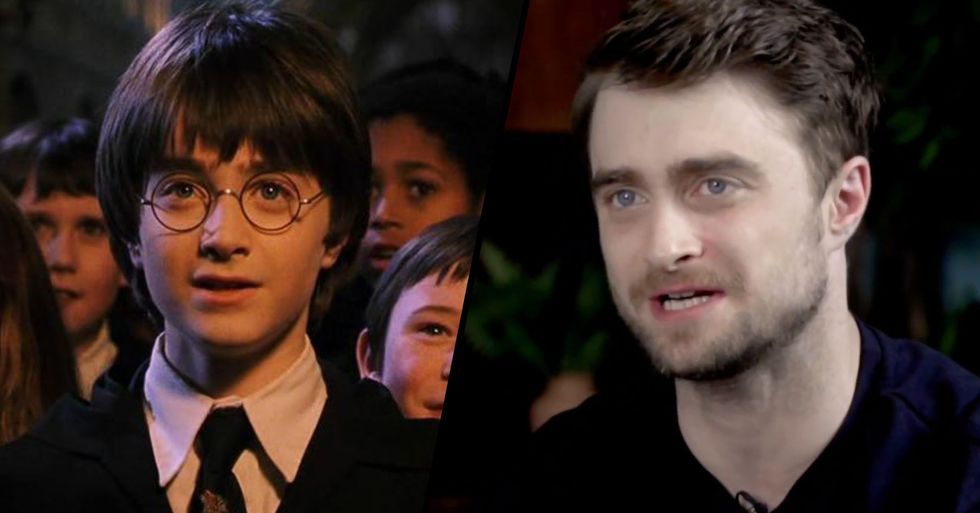 Daniel Radcliffe Says 'Harry Potter' Turned Him Into an Alcoholic

Being a child actor can come with some incredible perks, and open your world up to endless possibilities, but it also requires you to grow up fast, maybe a little too fast.

Daniel Radcliffe has given the most heartbreaking reason he turned to alcohol after filming the Harry Potter franchise.

We've all been guilty of binge-watching the Harry Potter series, haven't we?

Nothing beats a nice cup of coffee in front of the TV with our favorite bunch of wizards trying to defeat evil.

It's a box-set that we've all grown up watching...

And it seems like we'll never get bored of it either.

But it has come out that not all was what it seemed on set.

This has truly left me questioning everything I know about Harry Potter... Here's a shocking fact you weren't aware of when watching the movies.

We all know Daniel is a great actor. The series just wouldn't have been the same without him and his little, round glasses, but did you know he was drunk on set a lot of the time?

Daniel has talked about his relationship with alcohol, admitting he was actually drunk in certain scenes.

"I can point to many scenes where I'm just gone. Dead behind the eyes." He admitted that the role made him struggle a lot with alcoholism. Keep scrolling to read his story...

Such as the struggles Harry faced, Daniel Radcliffe has given an insight into his life after the franchise ended.

He has revealed something heartbreaking.

Radcliffe explained that playing the lead role in Harry Potter was the reason he fell into alcoholism.

He let it all out in an interview.

It was BBC Radio 4's Desert Island Discs, where Radcliffe and other guests were interviewed by Lauren Laverne.

"If I went out and if I got drunk, I'd suddenly be aware of there being interest in that because it's not just a drunk guy. It's 'Oh, Harry Potter's getting drunk in the bar.'"

Radcliffe opened up about the perception of Harry.

He said that at the start of his career as a child actor, the wizard role he portrayed "carried some kind of interest for people and also a slightly mocking interest."

He added: "It's inherently funny for people."

In the interview he admitted that his way of dealing with everything was to turn to drink, saying: "I did a lot of that for a few years."

Radcliffe was only eleven when he first appeared as Harry.

He said: "A lot of drinking that happened towards the end of Potter and for a little bit after it finished, it was panic, a little bit not knowing what to do next - not being comfortable enough in who I was to remain sober."

It's not the first time Radcliffe has talked about his struggle with fame and attention.

He spoke to Off Camera last year...

Saying: "In my case, the quickest way to forget about the fact that you're being watched is to get very drunk. And then as you get very drunk, you become aware that oh, people are watching more now because now I'm getting very drunk, so I should probably drink more to ignore that more."

He also spoke to Laverne about outgrowing the role.

And about dealing with being a child star, detailing what happens to actors when they get older and can no longer play the role that made them famous.

"They are by that point the breadwinner for their family. So multiple people are now reliant on them continuing to do this job and they feel pressured into it and forced into it."

"I think that's why you can see people go to drink and drugs because it is fun and they're available and it seems like a good idea. There's nobody around you talking about the consequences or being ­honest with you about that." It's heartbreaking he felt he couldn't talk to anybody, but we're so glad he's on the road of recovery.