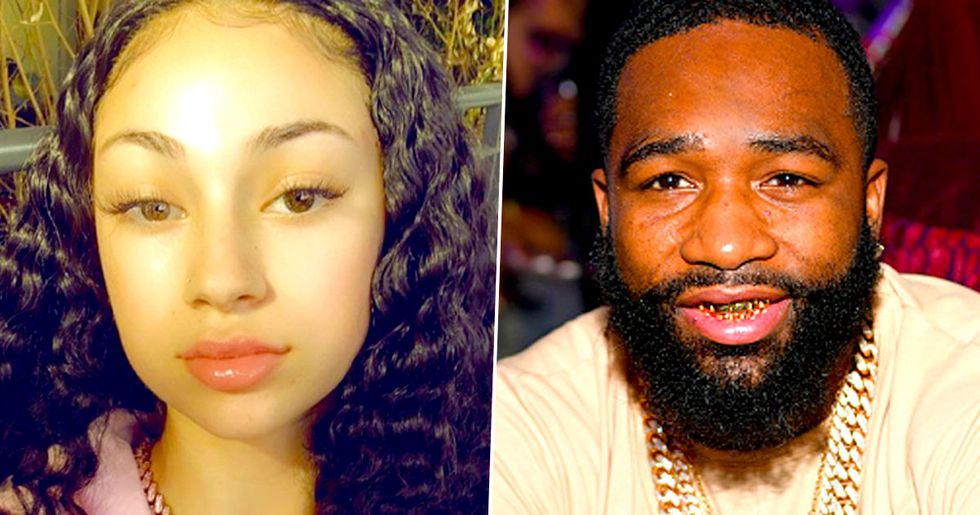 Seeing the name Danielle Bregoli may not mean too much to you. But we guarantee you know who she is - it's just you may better know her by one of her aliases.  Perhaps if we say the "cash me outside" girl, you'll know who we mean? Or perhaps the rap star Bhad Bhabie? Yep, that's Danielle Bregoli - and she's back in the news again.

Bregoli is only 16-years-old and this time she's in the news for outing boxer Adrien Broner after he slid into the child's DMs...

Bregoli shared Broner's creepy message to her and he has since responded for his questionable antics.

She's certainly moved away from her humble beginnings.

Here she is performing onstage for the final night of her Bhanned in the USA tour in June 2018 in West Hollywood.

But one area of insecurity for the teen? Her teeth.

Sources say Bregoli was embarrassed by her crooked teeth, with a particular issue being the crowding on her bottom row.

In fact, it's tricky to find a pic of Bregoli's gnashers.

The vast majority of photos of her online show her with her jaw clamped firmly shut, likely to shield her insecurities from the public.

While they perfectly fit her "rap star" persona, they're also a great way of hiding less-than-perfect pearly whites.

But now all that has changed!

TMZ reported that Bregoli has splashed out on a whole new set of teeth to bring in the new year.

Last year, she shared a video about her insecurity.

In it, she smiles to the camera, saying, "I hate my teeth." She then pouts and poses, saying, "but I look cute if I keep my mouth shut."

The procedure Bregoli went for was a set of porcelain veneers.

Veneers are placed over the natural teeth to give an even, white and flawless appearance.

For those desiring the perfect smile, there's no better way to go.

Veneers are becoming increasingly popular as a way of "cheating" perfect teeth.

But the procedure doesn't come cheap.

According to TMZ, Bregoli's new set of gnashers cost her a whopping $40,000. That's a lot of money, particularly for a teenager!

The star also goes by her rap name Bhad Bhabie.

The Beverly Hills based dentist to the stars has an Instagram page full of amazing transformations.

Some fans reacted positively to the news.

The decision to change the things you don't like about yourself can be empowering, plus will likely boost Bregoli's career in our image-obsessed age.

Others were less happy.

It's true that Bregoli's new smile is far more generic and gives her a less individual look.

But if she's happy with it, who are we to judge?

Often the confidence boost people get from "fixing" their so-called "flaws" can have a hugely positive impace on their confidence and thus their quality of life. We say, live and let live!

Bregoli makes a ton of money through her social media presence.

Her career has many branches, but it's suggested that it's her Instagram presence which has boosted her income enough to allow for this expensive procedure.

The controversial star's career seems set to grow even further in 2019.

She was named one of Time Magazine's 25 most influential teenagers of 2018.

Love her or hate her, it's going to become harder and harder to escape Bregoli as her stock is on the rise.

And her Spotify stats speak for themselves.

And it's safe to say those fans are pretty dedicated.

We have to say, it's pretty impressive that this teenager has managed to turn one car-crash television appearance into what seems like a legitimate career.

In spite of her controversies, she's still standing.

Bregoli has faced a myriad of legal issues, plus a barrage of online hate. And while she's not unproblematic, she's also a teenage girl, and that's important to remember.

In the grand scheme of things, if it makes her happy and she isn't harming anyone else, then we say go for it! We're just curious as to what she's going to do with her substantial collection of grills now.

And so for that, we have to say thank you. We're extremely excited to see Bregoli's Snapchat show in the coming months. If this story is anything to go by, we're in for a treat.

But now she's in the news for a different reason.

You might be confused into thinking that Bhad Bharbie is older than she actually is, considering everything she's done over the past few years. But actually, she's only 16.

Well it means that 30-year-olds absolutely should not be messaging her. Unfortunately, nobody told Adrien Broner, the former world champion professional boxer and that's exactly what he went and did.

Broner slipped into her DMs.

The boxer sent Bhad Bharbie a message telling her:

But Bhad Bharbie outed him on her social media, posting his message to Instagram and to her 17 million followers. She accompanied his messages with the Akon song: 'Locked up'.

Broner has been bombarded.

Following the public outing, many commented on Broner's online profiles saying he should be 'locked up' for messaging a minor and questioning his intentions.

Broner has since apologised.

Broner has claimed he made an 'honest mistake'. He added:

Nobody wants to date a kid. But I fault Instagram for not having people's age on their profile. I thought she was grown the way she out here moving.

Is it too little too late?