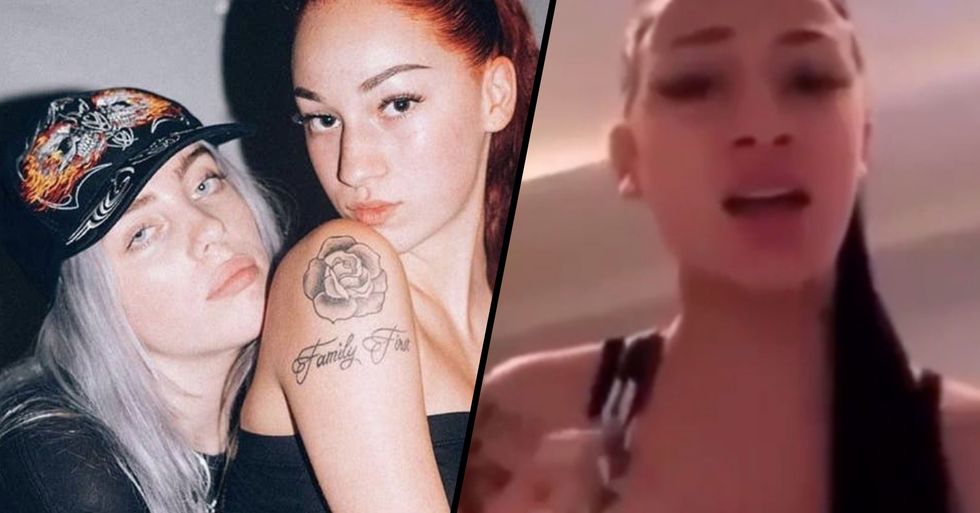 Seeing the name Danielle Bregoli may not mean too much to you. But we guarantee you know who she is - it's just you may better know her by one of her aliases.  Perhaps if we say the "cash me outside" girl, you'll know who we mean? Or perhaps the up-and-coming rap star Bhad Bhabie? Yep, that's Danielle Bregoli - and she's back in the news for a whole different reason.

The teen is known for stirring up some trouble online and it seems as if her latest victim is none other than a global superstar, Billie Eilish, but there's a plot twist to all of this...

Keep scrolling to read all about the drama.

She's certainly moved away from her humble beginnings, that's for sure.

Here she is performing onstage for the final night of her Bhanned in the USA tour in West Hollywood.

She was named as Time Magazine's 25 most influential teenagers of 2018.

Love her or hate her, it's going to become harder and harder to escape Bregoli as she continues to stay in the spotlight.

Bregoli also started gaining more fans when she became the star of her own Snapchat show.

Danielle has revealed that her Snapchat Reality Show “ Bringing Up Bhabie “ is Wild. She also said that it will be… https://t.co/WoiZKP68MY
— BhadBhabie_gangg (@BhadBhabie_gangg)1541483492.0

The twelve-part series, named Bringing Up Bhabie, became a hit amongst the public and rocketed her to becoming a more well-known celebrity.

She is known for her unique appearance.

She hooked herself up with a set of grills and while they perfectly fit her "rap star" persona, they became a way of portraying her as more intimidating.

However, when she shared a video about her insecurities, we understood why.

In it, she smiles to the camera, saying, "I hate my teeth." She then pouts and poses, saying, "but I look cute if I keep my mouth shut." Her ability to be vulnerable gained her some fans because people weren't used to seeing this side of the star.

Bregoli also makes a ton of money through her social media presence.

Her career has many branches, but it's suggested that it's her Instagram presence that has taken her to the top and it's because that's where all the drama is.

And recently, she had some new tea to spill...

You may or may not know that Bregoli has some pretty famous friends, but some of them quickly turn into enemies as she recently revealed in an Instagram live.

She was pretty open about her friendship with singing superstar, Billie Eilish.

Fans in the comments were asking her about her friendship with Eilish and she didn't hold back when exposing us to the little details.

"I think I’m friends with Billie. I don’t know if Billie is my friend. Every time I DM her and give her my number, she just doesn’t text me. I guess that’s what happens when b***** get famous. It can be like that, I’m not trippin’."

"I know who my real friends are." Yikes! It seems as though this is one friendship that might not be reviving any time soon.

So that statement hardly holds any value. Maybe she's just busy? I mean, she has been winning awards left, right and center, not to mention releasing new music. It can get hectic.

However, in spite of her controversies, Bregoli is still out here doing her own thing.

While she's not unproblematic, she's also a teenage girl, and that's important to remember, as is Eilish. If they are planning on sorting things out, leave them to it.

And so for that, we have to say thank you. The tea has never been so hot! If you want more about what Billie Eilish bizarrely revealed on stage recently, keep scrolling...