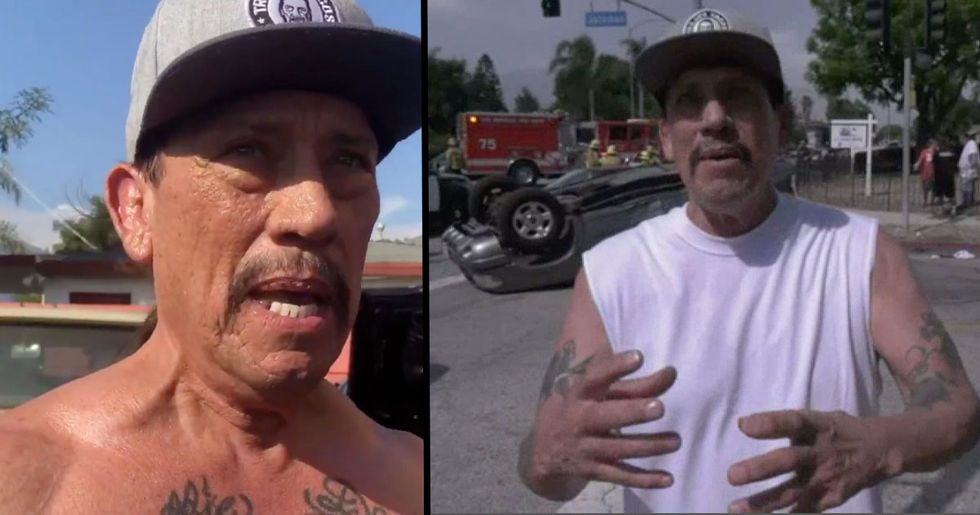 But real-life Trejo has proved that he's anything but a villain this week. During a car collision in Los Angeles, Danny Trejo became a real-life hero - and he proved once and for all that we should never judge one another on our appearances.

And this fact has been cemented this week.

Our story takes place in Trejo's native Lose Angeles - where he still lives to this day.

Two cars crashed on an LA street - and, it's worth noting, Trejo was not involved in this traffic incident in any way. He just happened to be nearby.

One of which was a Toyota SUV. And it seems that the crash was pretty intense, despite only involving two cars.

Because it resulted in one of the cars flipping completely over.

Yes, we know, it sounds like a stunt for an upcoming Trejo movie - but this car accident was all too real.

But what makes this all the scarier?

The overturned vehicle (the Toyota SUV) still had passengers inside - one of whom was a baby.

Here's a picture of the scene.

Pretty scary stuff, hey? We bet the passengers were pretty glad that Danny Trejo happened to be nearby. Talk about right place, right time!

Because of course, Trejo couldn't do nothing.

He first attempted to access the car through the broken window. He was able to reach the child, but couldn't free them.

But, thankfully, Trejo wasn't alone in his rescue mission.

With the help of another bystander named Monica Jackson, Trejo managed to get the baby free from the car.

Luckily, the child was unharmed.

In spite of the severity of the crash, the baby wasn't injured. "The only thing that saved the little kid was his car seat," Trejo claimed.

There were three other passengers involved in the crash.

The three were all taken to a nearby hospital. Their injuries are being treated, but are reportedly not life-threatening.

And what he said was truly heartwarming. "Everything good that has happened to me has happened as a direct result of helping someone else," the actor offered.

In it, Trejo also offers some valuable advice for drivers who want to stay safe on the road. "Pay attention!" he warns.

Understandably, people have gone wild for this touching story.

After the horrors faced by the USA this past weekend, it's important to focus on these stories that remind us what humanity is really all about.

And it seems to have cemented Trejo's reputation.

So, what have we learned from this heartwarming act of heroism? We should never, ever judge people based on their appearances. Oh, and that Danny Trejo is amazing. For more heartwarming acts of heroism, read on.