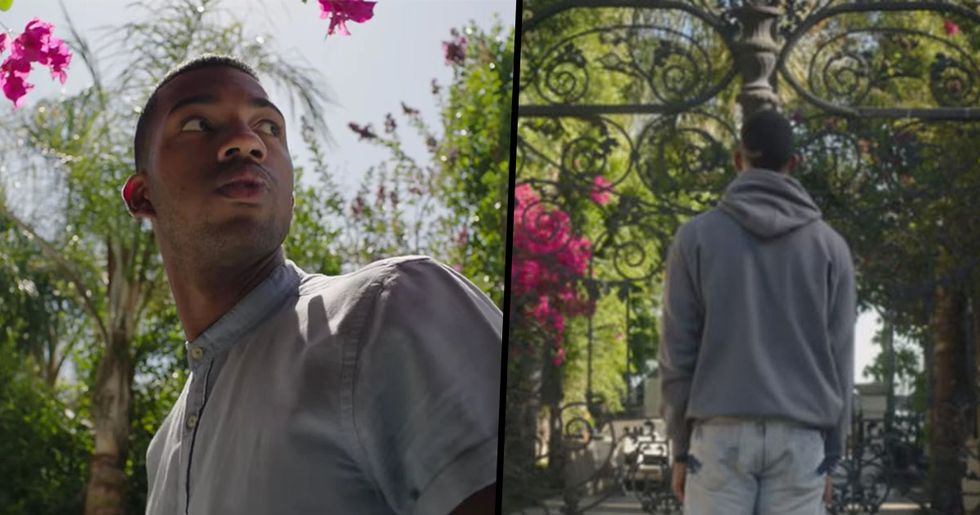 Those of us who lived through the '90s will never forget how Will Smith shot to stardom with his iconic role in The Fresh Prince of Bel-Air.

As a treat to the show's die-hard fans, young director Morgan Cooper has recently released a "trailer" for Bel-Air. It looks so realistic that it's hard to believe the movie is not.

Bel-Air is a darker and more realistic revival of the '90s show. However, it did keep the original key storylines and characters.

Cooper did such a great job that even well-known actors were impressed. Meanwhile, fans called for Netflix to sponsor the film.

Unfortunately, neither Will Smith nor his co-star Alfonso Ribeiro believes the reboot would and should happen. Cooper also doesn't have any plans to work on the movie.

But rumor has it, something very special might just be in the works already.

Even though Fresh Prince of Bel-Air, the sitcom, aired in the early '90s, its fan base is stronger than ever.

No one could deny: Will Smith's acting was on point, making us laugh every time.

But have you ever imagined what Fresh Prince would look like if it were a drama with a dark backstory?

If you haven't, now you don't have to because Morgan Cooper created a brilliant trailer that shows exactly that.

He gave the funny show a dark twist.

As Esquire noted, in the '90s Fresh Prince Will ends up with the Banks family because he "got caught tagging a wall and getting in 'one little fight.'"

According to Independent, the cinematographer and director grew up watching the original sitcom.

He "always thought there was more to the story."

That's how he came up with the reinvented story for the Bel-Air trailer.

Our favorite aspects and storylines of the '90s show are still in it.

However, Cooper added an intense dramatic tone to the story that was definitely not in Fresh Prince.

Just like in the original show, Will gets sent to Bel-Air to live with his relatives.

And just like in the original, it's because he has got into trouble back in West Philadelphia.

But the trouble in the new trailer is a lot worse.

Will gets arrested for carrying a gun. I certainly don't recall a gun in the original.

The trailer begins with Will's mother lecturing him about the reality of his situation.

But, Daily Mail says, this isn't "the comically gray-haired and bespeckled mom pointing her finger at the camera in Fresh Prince's opening credits."

This mother is scared for her son's future.

Will can't see how bad his situation is, and his mother is doing her best to explain it to him.

"For some reason, you think this is a game. This is not a game, Will," she says.

"The only reason why you're not in jail is because Uncle Phil called in a favor." From the very first seconds, we see that there's nothing funny here.

The trailer then shows what got Will into trouble.

He's playing basketball with friends, back in West Philadelphia, when the ball accidentally hits a man who really shouldn't have been bothered.

He and Will get into a fight. The police show up.

In the original series, Will's mother sends him away because she's afraid he'll get in with a bad crowd. In Cooper's version, he's already in it. A gun is found in Will's backpack.

Will is sent to the Banks.

He arrives in California with a "What Would Meek Mill Do?" sweatshirt and for the rest of the trailer, Will attempts to get used to living in a new home.

The most important aspects of the original Fresh Prince are all there.

"Jazz and his secret handshake, a shopping-obsessed Hillary, and a hard-ass Uncle Phil who isn't here for hijinks," Esquire writes.

Carlton's iconic dance moves also made it into the trailer.

However, there he's "a privileged snob who asks Will, 'How are we related again?'"

Alfonso Ribeiro, who played Carlton in the 90s, has recently shared that he doesn't think the show will ever return, especially since James Avery's (Uncle Phil) passing.

Uncle Phil also reassures Will right away that he will never bail him out again.

Unlike in the sitcom, Will doesn't tease Uncle Phil. Instead, he shows he understands.

And there's definitely no laugh track.

"My life ain't a sitcom," Will says at one point. "I don't feel like I belong here."

However, it's not all dark for Will from here on.

Towards the ending of the trailer, we see Will making a life for himself in Bel-Air. He gets into the Bel-Air basketball academy, and he meets Lisa.

Cooper shared on social media that over 100 people worked on the trailer.

That includes both in front of and behind the camera, Independent writes. It clearly paid off: almost 2 million people have watched it.

No actual movie is coming to theaters.

However, fans were so impressed with the trailer that they were begging Netflix to make it happen.

Jonathan Daniel Befort wrote, "It would be a perfect movie, a TV show would be too much. They did a really good job finding someone who could pass as a young Will Smith."

Angi Evans Schuster: "OMG...please someone back this to make it into reality!!! I'm not a huge fan of remaking shows, but the new twist is...pardon the pun...the freshest I have ever seen!!!"

Even Tatyana Ali, who played Ashley Banks in the original sitcom, was impressed.

According to Daily Mail, she tweeted, "This is cool... got me feeling some kinda way."

Cooper was very happy with how much people loved his Bel-Air trailer, according to Huffington Post.

"When we first made this thing, I was really confident in the art," he said.

"The internet’s the internet. You never [know] if something’s gonna catch a spark or not. I’m very excited for everything that has happened and receive it humbly."

"But at the end of the day I’m a black creative, and representing my culture and expressing myself authentically is of the utmost importance to me."

Esquire says Will Smith has also confirmed that no reboot is going to happen and it would be best to "leave that one alone."

He even suggested that he would only become involved "when hell freezes over."

However, TMZ reported, back in 2018, that the production company behind Fresh Prince of Bel-Air "had filed a trademark application for the phrase "Fresh Princess." Could it be... that a female-led revival is in production?