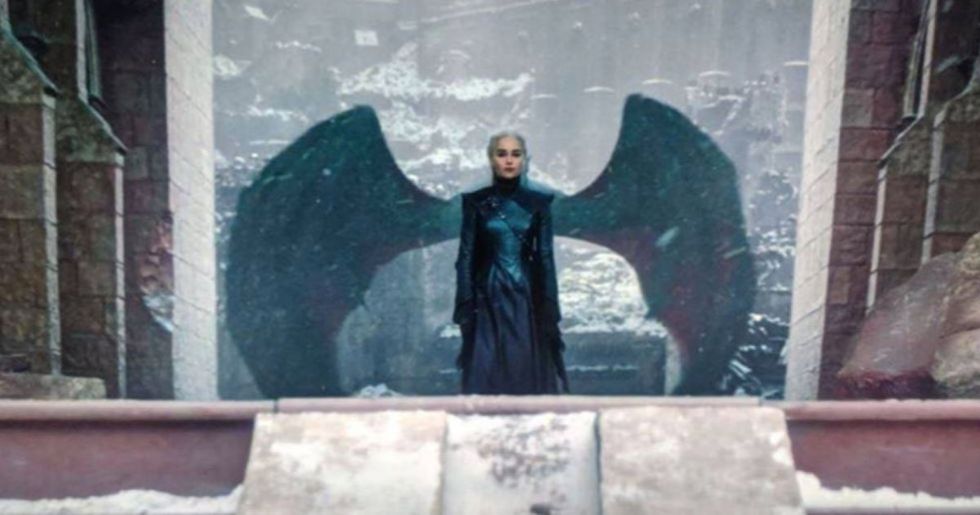 The Dark Meaning Behind Daenerys' Dragon Wings in Season Finale

The final season of Game of Thrones has confused and upset many, particularly after Sunday's grand finale.

With such great candidates, no one expected to see Bran Stark claim the iron throne. Unlike the others, Bran has done nothing to prove his worthiness, and the apparent "messages" behind Bran's win are just plain wrong.

Viewers are also upset with Daenerys' fate. First, she went mad with power, then she was killed - by Jon Snow of all people. However, Emilia Clarke has shared her thoughts on it and admitted that it was "logical."

And one scene, in particular, proves it.

The "dragon wings" scene made a lasting impression on the viewers; some believed that it was a cinematographic masterpiece, others thought that it was nothing more than good CGI work. But no one could deny that the meaning behind it was much more powerful.

It wasn't as simple as "she's the mother of dragons." Someone pointed out that it's actually a beautiful, yet sad conclusion to Daenerys' story.

GoT fans were left quite unhappy with the show’s final episode.

For starters, Bran Stark winning the iron throne after doing hardly anything to gain it was a low blow for everyone, PopBuzz says.

For ten years, fans have been dying to know who would be the one to sit on the throne.

Daenerys was surely going to win it, if only she hadn't lost her mind. Cercei, Arya, and Jon Snow seemed to be her only major competitors.

At the beginning of season 8, all of these were potential winners.

Some viewers even speculated that the Night King would eventually kill everyone, leaving no one to lead the 7 kingdoms.

But it was Bran who came out victorious.

It's easy to see why his win made people upset: Bran put in the least effort out of all candidates to the throne and the throne got destroyed.

This is how viewers are reacting.

So Bran gets to be king, despite the fact that he just put his name on the group project and didn’t do any work. #DemThrones
— Jemele Hill (@Jemele Hill)1558319575.0

Most of them believe that Bran winning the throne without working for it sends a controversial message.

Others suggested that Tyrion's reasoning isn't reasonable at all.

But this isn't even the worst of it. Hopefully, this next one is unintentional.

Twitter-user, @odairannies, also noted, "Tyrion was praising Bran for surviving beyond the wall when Meera Reed was the actual reason he made it alive. And this girl not only never got a proper sincere 'thank you' but also was never even mentioned again and we don't know if she survived." Seriously? In the middle of current women’s rights movements, this is what the show's writers decided to go with?

The other thing that GoT fans were not going to accept was Daenerys’ sudden madness and her heartbreaking end.

She wanted the throne so bad that after killing innocent people, she told her army to keep going. Tyrion and Jon had to do something about it before she caused any more deaths.

Jon did try to convince her that cold-blooded murder wasn't going to help her case.

Unfortunately, Dany wasn't going to change her mind; she would stick to her plan.

So Jon did what he had to do.

Instead of telling Daenerys that he would stay loyal to her, he turned a harmless hug into a deadly stab.

Actress, Emilia Clarke, has recently talked to The Independent about how Daenerys' fate made her feel.

"It was a f***ing struggle reading the scripts," she admitted. "What I was taught at drama school [was] that your character is right. Your character makes a choice and you need to be right with that."

"An actor should never be afraid to look ugly."

"We have uglier sides to ourselves. And after ten years of working on this show, it’s logical. Where else can she go?"

"I tried to think what the ending will be," Clarke added.

"It’s not like she’s suddenly going to go, 'Okay, I’m gonna put a kettle on and put cookies in the oven and we’ll just sit down and have a lovely time and pop a few kids out.' That was never going to happen. She’s a Targaryen."

Clarke said that she felt that Daenerys was "very taken care of… it’s a very beautiful and touching ending."

"I care for her so much. She’s been a part of me for so long that, in reading this script, I did what any actor is told to do and would do."

She also said, in the final scene, that she didn't want to depict Dany as "mad." Instead, she wanted to remind the viewers that the Queen is a victim of unimaginable trauma.

"If you see abuse in someone young, they often are able to mentally leave the room."

"I wanted Daenerys to be there."

"I wanted to show her as we saw her in the beginning: young, naïve, childlike, open, and full of love and hope. I wanted so much for that to be the last memory of her." But it seems that this will not be the image of Daenerys that fans will remember.

It will be this epic scene:

According to LadBible, this symbolic image of Daenerys with dragon wings was the one part of the final episode that made it all worth it, even if it has a dark meaning behind it...

After causing so much destruction and death, the Queen made a speech to her remaining soldiers.

The castle doors opened up and Daenerys walked out as the last of her dragons spread its wings behind her.

Fans may be angry with her descent to the dark side.

But no one can deny that the scene was breathtaking, showing both the throne's power and its dangerous effects.

The scene was so well-done that it's even inspired a new meme.

GoT has been providing us with ten years worth of hilarious memes, PopBuzz says.

Particularly from season 8 and its finale.

Some of the most popular ones are the "Bran the Broken" and "Brienne writing" memes.

Someone tweeted a screenshot of the Queen's moment, saying, "Shot is brilliant and should be shown in any film study class."

But not everyone was so hyped about it.

So they started a meme that shows other "just as great" shots - because they were entirely thanks to CGI. Just like the wings one.

It sparked a debate.

Some viewers thought that the wings were quite an obvious metaphor, while others were sure the scene wouldn't have been any good without CGI, therefore not film study-worthy.

But technical aspects aside, the meaning of the scene struck a chord with almost everyone.

Fans don't believe that the wings simply represent the fact that Daenerys is the mother of dragons.

Some say that the scene suggests that Dany is actually a dragon herself. Bare with us on this one.

Such as Andie Felton who wrote, "That was an awesome shot..."

"... but what most fans seem to forget, in earlier episodes, she tried to train her dragons but was told on several occasions that 'you can never tame a dragon.'"

"Dany is a Targaryan, therefore she too is like a dragon, and many found out she couldn't be tamed.'"

Felton added, "Her advisors tried, but in the end, they realized, she could not." And the wings are a beautiful metaphor for it.

Whether the theory is true or not, one thing is for sure - Daenerys is no two-dimensional character.

Much like her story and character development, she's complicated. She's been through unbelievable trauma. She's worked hard for the iron throne and the dragon wings are the perfect representation of it.