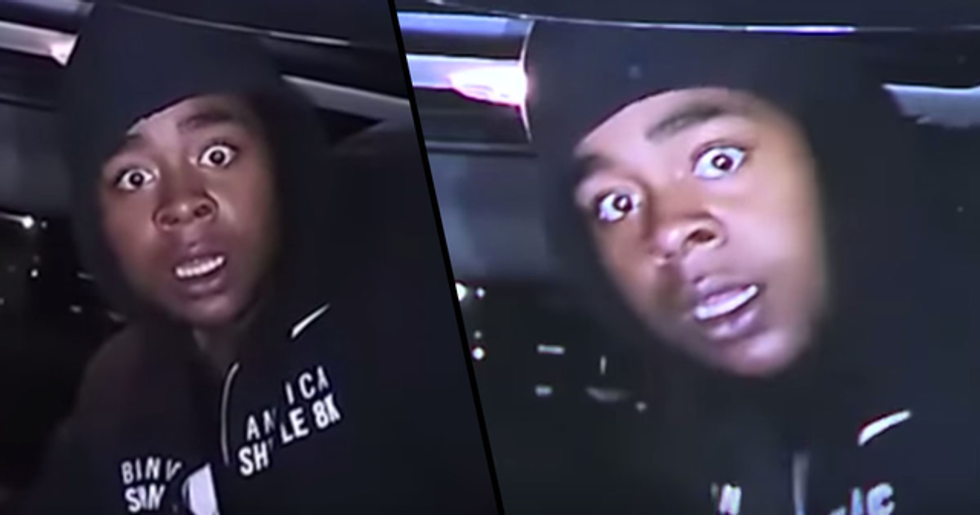 If you love a juicy bit of karma, then this is the article for you.

A woman in Oregon was able to assist police brilliantly after her car was broken into... because she had a crystal clear image of his face after her dashcam caught him red-handed.

While the thief was rummaging around for valuables to steal in her car, the woman's motion-activated dashcam got to work and snapped a perfectly clear photo of his face. And, to make this photo even better, the shock and surprise of the camera flash have been captured hilariously.

Keep scrolling to see the picture, which will stand as a solid reminder as to why you should never break into something that isn't yours.

Technology is just great, isn't it?

In today's day and age, we'd be pretty lost without our many little gadgets.

And we wouldn't have this excellent story.

Because this is the tale of how a nifty little gadget helped to capture the identity of a wannabe car thief.

A woman's car was broken into.

The woman, who has chosen to remain anonymous, lives in an apartment complex in Beaverton, Oregon. After a neighbor found her car door wide open, she discovered that her car had been broken into the night before.

It turns out that a group of thieves had been prowling through the car park in the search for unlocked cars.

But they unwittingly settled on a car that was ready to record their every move... The woman has an Owlcam in her car - a motion-activated dashcam. "It starts recording without any light as soon the motion happens, but after 10 seconds the light comes on."

And it expertly caught the thief red-handed.

Without realizing it, his movement had silently activated the camera, and it was actually counting down the seconds ready to take a photo the entire time.

And here is the final result.

The man of the hour looks glorious, doesn't he?

You can literally see the dread in his petrified little eyes. He knows that he's been rumbled.

After the flash went off...

The thief didn't stick around and hastily scrambled out of the car.

And, to make this even better...

He didn't think to destroy the evidence. The thief left the dashcam, and ultimately the perfect picture of his face, in the car, ready for its rightful owner to find. She immediately handed it over to the police. "We don't normally get these kinds of criminals on camera."

And understandably, the car's owner is

"I am totally happy that I bought that camera. It's worth every penny."

And, despite the shock of having her car broken into...

The woman found the video to be hilarious. "I just kept playing back the video because it was just so funny."

She's pleased that the video has gone viral.

But the thief is yet to be caught...

But, thanks to the dashcam's hard work, it shouldn't be too difficult for police to identify him.

You can watch the full clip here.