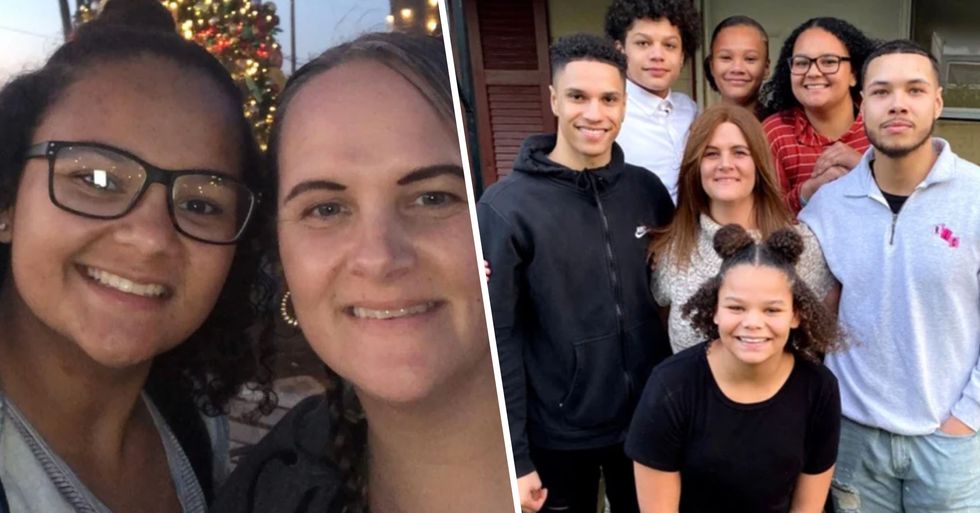 Since the spread of the deadly virus, there have been some utterly horrific stories. But the latest is one of the most heartbreaking we've seen yet.

Now, the daughter has spoken out, and what she's had to say is even more heart-wrenching...

There have been some utterly heartbreaking stories to come out of this pandemic.

But the latest is one of the most heart-wrenching yet.

Sundee Rutter is a forty-two-year-old single mother of 6.

She was a stage 4 breast cancer survivor and who tragically ended up testing positive for the deadly virus that is currently sweeping through the world.

Sundee was only just recovering from her yearlong bout with breast cancer when she was diagnosed with the virus.

At first, she thought she just had the flu, but things quickly took a turn for the worst - and she began treatment for pneumonia.

At first, her children were allowed to see her with a face mask on.

But that quickly changed and she was soon isolated by the hospital.

This made it difficult for her kids to see her.

via: COURTESY OF ALEXIS RUTTER

Her fourth-oldest child, Elijah Ross-Rutter said: “Like, I’m about to lose my best friend and she can’t even hear me."

The hospital in Washington where the first known US case of the virus was treated.

There, she spent 8 hours in a sealed room...

Where hospital staff wearing full protective suits would come in and out to treat her.

This was especially painful for the family.

“They don’t even want to touch my mom," Elijah said.

However, things did start to look up for the family.

Elijah explained that both himself and his mom were sent home from the hospital - so it looked as though she may have been on the mend.

However, just 4 days after she was sent home, Sundee was sadly re-admitted to the hospital.

She was re-admitted on March 7th. This time, her son was confined to the visitors' waiting area, while the doctors examined his mother.

Several hours later the doctors told him they were keeping his mother in overnight.

At the time, she was being treated for pneumonia, and the next day tested positive for the deadly virus. “She thought she had the flu, probably, but like, the [virus?] It was kind of hard for us to understand how she could get it because not that many people had it around here," he said.

For a while, Sundee was able to communicate with her children via text.

“For a while, she was able to text," Elijah explained, adding that his mom told him she was “much better" when he asked her how she was doing on March 12.

On March 16th the doctors called the family to come in.

“She was sending me hearts on the messages but she wasn’t replying." She died later that afternoon.

She would have celebrated her forty-third birthday this August.

Her children described her as “kind, beautiful, caring, and goofy," but most importantly willing to put her children before herself. But the most heartbreaking part of this story is the way in which her children had to say goodbye to her...

The last time her kids saw her was through a small glass window.

As their mother was losing her battle with the virus, Elijah and his 5 siblings said goodbye to her using a walkie-talkie.

The receiver was propped up next to her pillow.

Ross Rutter, her fourth oldest child, said: “I told her I love her... she shouldn’t worry about the kids."

Her family waited outside her hospital room.

All 6 of her children, as well as her sister and mother, said goodbye via the handheld radio device.

Since the family's story surfaced, people across the country have shown their support.

They have donated more than $400,000 to her family, which the oldest, twenty-four year old, Tyree Rutter, plans to use to secure housing for him and his younger siblings after he completes his last year at college. Ross said: “Like it’s crazy how much love and support we’ve been receiving from the community, it kind of goes to show how big of an impact my mom had on our community. “She was a supermom, you know?"

And now, Sundee's daughter, Alexis, the oldest of her 6 children, has spoken out.

via: COURTESY OF ALEXIS RUTTER

Alexis revealed just how strong her mom was, even after being given her diagnosis. “She stayed so strong and so positive through it, I really couldn’t tell how sick she was because of her joy and strength," she said. “That is, until things took a turn for the worst."

"We were just reaching the light at the end of the tunnel."

“She finished chemotherapy, went through a double mastectomy and had finished radiation and things were just starting to seem like they were taking a turn for the better."

Alexis described her mom as "selfless."

"Being the selfless and loving mother she was, some of the major concerns she expressed to us when she was initially diagnosed with breast cancer is her worry about us," Alexis recalled. “She was dealing with a whole new chapter in her life as far as health and what her life is going to look like, and she’s not even thinking about that. She’s thinking about us. It’s just crazy how much she put us first no matter what."

Now, the grief-stricken siblings have to navigate life without both of their parents.

Their father died of a cardiac arrest in 2012. "When things get hard, we just have to remember that the reason it hurts so much is that we were blessed with the opportunity and privilege of being loved so well by a woman whose joy was so peaceful and comforting," Alexis said.

“Not everyone gets to experience unconditional love from their mother like we did."

via: Courtesy of Elijah Ross-Rutter

"We can be at peace knowing she’ll always be in our hearts and that she gave it all she had and fought as hard as she could. She did such a great job raising six kids by herself and now we just have to hold each other close and continue what she started." At the time of writing, the family has managed to raise nearly $500,000 on their GoFundMe page. Heartbreaking. R.I.P. Sundee.