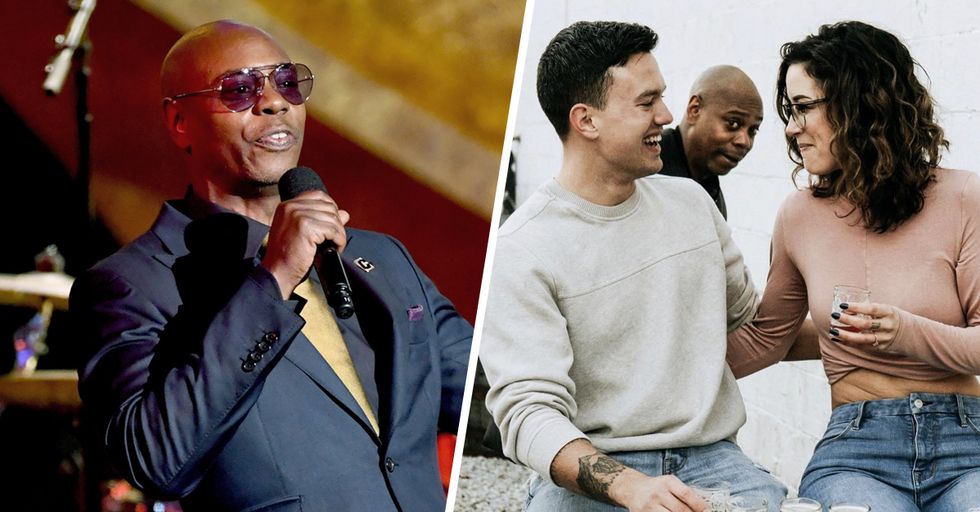 We all love a good celebrity photobombing. Seeing them goof around and have fun is often refreshing. But how would you react if one of these celebrities accidentally photobombed your surprise engagement? Well, that's exactly what happened to an Ohio couple when comedian Dave Chappelle popped into the background of their brewery-themed engagement shoot.

Originally, the comedian wasn't planning on participating in the couple's photo, but his last-minute change of heart is now taking the internet by storm. Chappelle surprised the couple by agreeing to wander into the background of their pictures.

Read up on their story, and how this awesome moment unfolded! Plus, other celebrity photobombs that will surely make you laugh!

Dave Chappelle made this couple's day.

How often do your engagement photos get photobombed by famous comedians?

Here’s how the awesome day came to be:

Emily Eldridge and Thomas Saunders were having a photoshoot for their recent engagement at the Yellow  Springs Brewery in Yellow Springs, Ohio. That’s when their photographer, Jaycee Brammer, saw Dave Chappelle walk in.

Chappelle lives on a farm in the town, but they never expected to see him!

Brammer told Yahoo Lifestyle about the encounter. “My husband, Nick, said, ‘Dave Chappelle just walked in.’ I think we were all a little starstruck and shocked. We knew he was from the area but never expected to see him."

The group had a brief fan-girl moment.

I kept my cool as we walked past him to go outside to the patio, even though I really wanted to fan-girl it up!" Brammer said. Saunders felt the same, adding, “Emily and I have always been fans of Dave Chappelle. I grew up quoting his show."

So, they took a chance.

“We set up outside and started snapping photos when Dave walked out. He stood about 20 feet from us, and we just kind of looked at each other like, ‘Wait, is this really happening?’" said Brammer. “I looked at Tommy and I basically said, ‘We should just ask politely. We have to at least try, right?’"

Chappelle initially “politely declined" to be in the photoshoot.

“I really wasn’t surprised because I had heard he wasn’t much for photos. We all totally understood, and Dave chatted with Tommy for a few minutes," Brammer said of the encounter. Saunders and Chappelle spoke about travel, and Saunders’ military history, as he has been in the Air Force since 2010.

Something in the conversation changed Chappelle’s mind.

“We went back to taking pictures, and not long after he came around and said, ‘I’m gonna photobomb you guys.’ Emily and I couldn’t hold it together, and we were incredibly grateful for him making an exception for us," Saunders said.

And thus, these delightful photos were taken.

Now that’s what I call a photobomb!

Chappelle enjoyed the shoot, too.

“He laughed after photobombing us and stepped back so we could finish," said Brammer. “After that we were all pretty much shocked and couldn’t believe what just happened. We reviewed the photos, and I walked over to show Dave. He laughed and said, ‘We’re gonna go viral, man.’"

And he was right!

People are going nuts over this awesome story! They truly did go viral.

We all love a happy ending.

Especially when you factor in a comedian pulling funny poses in your photos!

Don't worry, this is not the only iconic photobomb out there.

Tom Hanks finding a guy asleep at a restaurant and then taking selfies with the guy's phone is the best thing ever. http://t.co/yntRADGAbI
— Adam Rose (@Adam Rose)1425332303.0

Let this be a warning to all who fall asleep in restaurants. If you do, you may wake up with a bunch of Tom Hanks selfies on your phone!

See Hailee Steinfeld in the background?

She photobombed Snoop Dogg at the 2015 iHeartRadio Music Awards.

So he snuck up on Chris Pine at the 2015 Vanity Fair Oscar Party.

Jared Leto is a photobomb pro.

Here he is, also at the 2015 Vanity Fair Oscar Party. He seems pretty into it, right?

And here he is again!

This one is from the year before, also at an Oscar Party—you can tell, because he’s brandishing his Oscar as he photobombs Anne Hathaway.

Kristen Bell is an adorable photobomber.

During the 41st People’s Choice Awards, she stuck her head into this shot of Adam Sandler, Olivia Munn, and Anthony Anderson!

Who can forget this epic photobomb?

Benedict Cumberbatch couldn’t resist taking a leap into this picture of U2!

Kelly Clarkson had a fangirl moment at the 55th GRAMMY Awards.

We have no clue who is giving Michelle Pfeiffer bunny ears, but they’re a brave soul.

So much so, that he snuck behind Sandra Oh and Thomas Haden Church in this picture.

Actor Oscar Isaac mimed hitting fellow actor and on-screen rival Adam Driver in the back of the head at the premiere of Star Wars: The Force Awakens. Quick, Adam, turn around!

Justin Timberlake pulled a photobomb in this picture of his wife, Jessica Biel, at the 2017 Academy Awards.

Here he is, leaping playfully through Sarah Paulson’s shot at the 2017 Vanity Fair Oscar Party.

Johnny Wujek pulled off this photobomb of Kanye West, Kim Kardashian and Katy Perry back in 2015.

That knowing smile, though.

Bella Thorne and Mae Whitman were posing for pictures when Ken Jeong wandered into the foreground. He may be blocking the shot, but he’s also making it much more entertaining!

Fallon took Chris Pratt and Chris Evans to the Super Bowl, to spice up the background of several pictures!

Actors James Marsden and Kathryn Hahn were posing for a photo when Jack Black stepped in. It’s always funny when the other people in the photo are unaware of what's happening.

George Clooney is also a photobomb pro. Who knew?

George Clooney gave the camera a wave from behind Steven Spielberg, Jessica Seinfeld, and Jerry Seinfeld. Find this story funny? Share the photobombing fun with your friends!