David Attenborough Says to Greta Thunberg 'I'm Very Grateful to You. We All Are.' | 22 Words 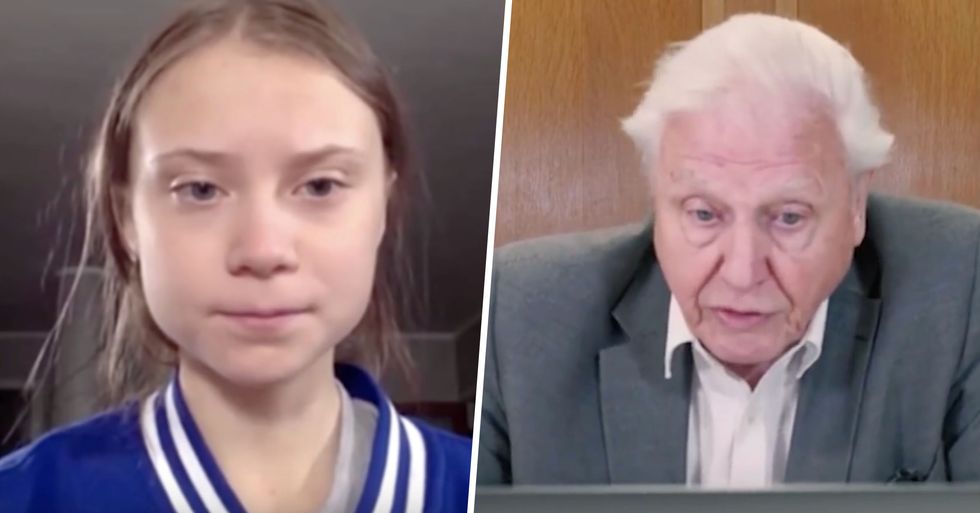 David Attenborough Says to Greta Thunberg 'I'm Very Grateful to You. We All Are.'

Greta Thunberg is undoubtedly one of the most talked-about sixteen-year-olds in the world right now. The teen has truly made a mark on the world with her unwavering commitment to the climate change movement - a cause which is showing no signs of slowing down.

She has garnered a lot of celebrity support, but it seems one of her biggest backers is no other than Sir David Attenborough. Keep scrolling to watch what went down when 2 of the world's most infamous environmental enthusiasts came face to face.

Just a year ago, Greta Thunberg was relatively unknown.

There's no denying at just sixteen, she's truly made her mark on the world.

But one of her biggest supporters?

David Attenborough is something of a legend in nature broadcasting.

His acclaimed nature documentaries have opened a lot of people's eyes when it comes to caring for our planet.

Greta and David were recently connected via Skype.

And they had some pretty important things to say to each other. Scroll on the full clip.

During their conversation, Greta told David he was her inspiration for starting her climate change movement.

The teenage activist explained that his documentaries were what first sparked her passion for preserving our planet. “Thank you for dedicating your life to this," she said, “It’s very inspiring."

Greta told the legendary broadcaster it was an "honor" to meet him.

“I’m very flattered that you say that," he modestly responded.

David made sure he told Greta what he thought of her work.

“Oh, she’s achieved things that many of us who have been working on it for 20-odd years have failed to achieve," he said. “That is, you have aroused the world." “I’m very grateful to you. “We all are."

For more news on climate change, keep scrolling to learn more about one scientist's bizarre claim that cannibalism could help combat global warming...