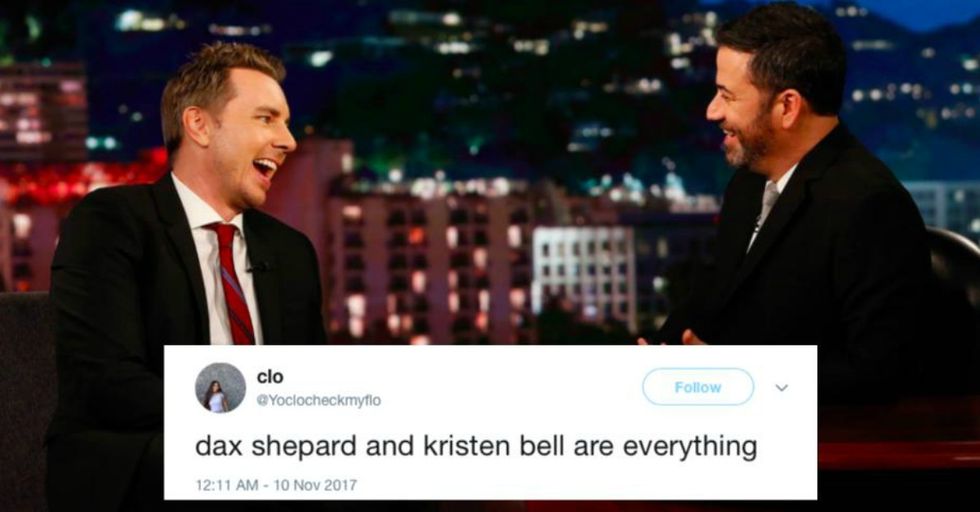 Celebrity couple Kristen Bell and Dax Shepard are no strangers to TMI. After four years of marriage and two children, Lincoln, 4, and Delta, 2, the pair have shared everything from Shepard's vasectomy to Bell's breast-feeding issues. Last week, Bell shared a particularly embarrassing story about their kids walking in on them while she and Shepard were having sex. Horrifying, right? As the audience chuckled, Bell reassured them. "It's OK," she said. "It's how they were made."

Now Shepard has ventured in with his own version of the story.

He was speaking to Jimmy Kimmel, who, of course, asked for his take on it. "Okay, they didn’t walk in while I was, like, pounding mom," Shepard began.

He then elaborated what really happened.

"We put on the TV in the living room — we’re bad parents — and then we stole away for a minute, afternoon delight, but we were just under the sheets and they walked in. It was more just explaining why we’re taking, like, a nap in the afternoon while they were loose."

Thankfully, there were no children traumatized by the ordeal... just the parents.

"Suffice it to say, I wouldn’t have gotten out of bed at that moment," Shepard said. "That would’ve been a strange nap I was taking." But that wasn't all...

Thankfully, neither Shepard nor Bell are embarrassed by sharing their sexual escapades with the world.

"I overshare," Shepard once told the L.A. Times. "I’ll tell strangers anything. I think it’s from being in a 12-step program for 12 years."