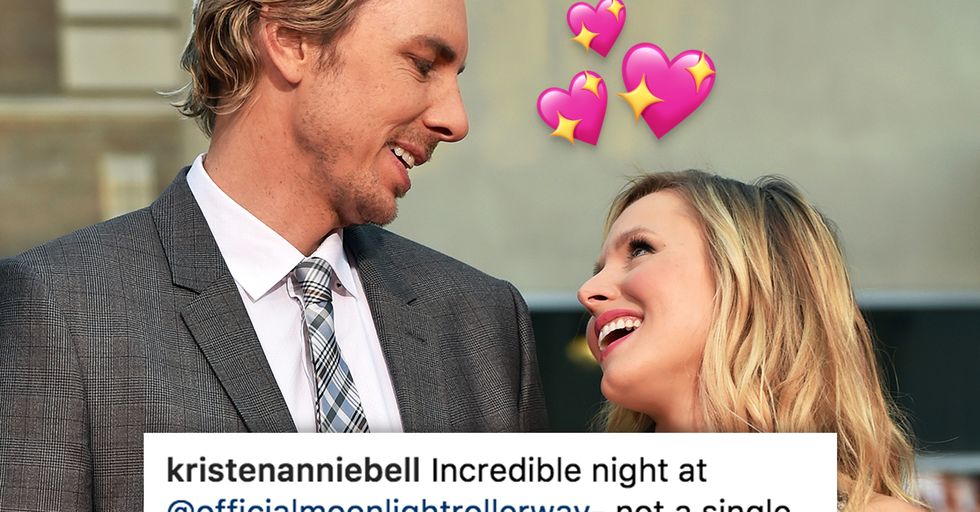 The world is not always a great place to live, but every once in awhile, you get a wonderful reminder that life can be truly beautiful and that love is real and good.

Or, as we like to refer to such a phenomenon: Dax Shepard and Kristen Bell. They have single-handedly (or, quadruple-handedly, or however the math works out on that) restored our faith in pretty much all of humanity. And the way they spent this past weekend is no exception to their incredible greatness.

We want to be like them when we grow up.

Just look at how lovingly they gaze into one another's eyes. They're the most in-love any couple has ever been. But it's not all serious lovey-dovey stuff all the time with these two.

Got a fancy dress party that needs classing up?

These two have you covered. They'll waltz into your party and immediately take it from drab to fab.

But they're not super stuffy or anything. They can just as easily rock a casual look:

Name a couple who looks better in American-flag onesies. Go ahead. We'll wait. Yeah. You can't.

Look at the way they adorably shove food into their mouths:

Amazing. Simply amazing. Are these two ever going to get their own reality TV show? 'Cause we would absolutely watch the heck outta that show.

OK, you get it. Kristen Bell and Dax Shepard are wonderful, and the rest of us are #blessed to even be included on the same planet as the two of them. They recently had a date night that further proves just how amazing they are. Wait 'til you see where it was...

Specifically the Moonlight Rollerway in Glendale, California. But he didn't just take her there on a date...

...He rented out the whole thing for just the two of them!

Here's a video of the two of them skating to Bobby Brown's "My Prerogative."

And if you don't like it, well, that's your prerogative. But you are wrong.

As it turns out, Bell and Shepard are actually auctioning off a chance to join them for another date.

You can enter their Omaze campaign to join them for a holiday game night! Seriously. Come on. Game night with Dax Shepard and Kristen Bell? It's like someone is literally reading our minds and making our most beautiful dreams a reality.

Hey, who knows? Maybe Mila Kunis could make an appearance, too.

Probably not, but you never know! She and Kristen are pretty much besties, after all. We can't wait to see what our favorite Hollywood couple gets up to next.