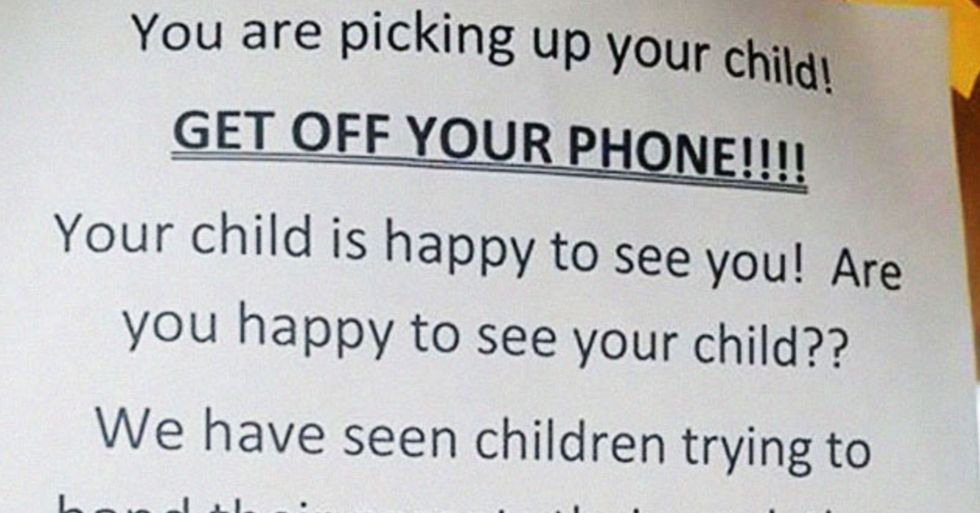 A daycare's scathing message to technology-obsessed parents has gone viral this week.

A woman who was picking up her child from the daycare service spotted the sign and, clearly agreeing with its message, decided to share it with the world.

Keep scrolling for the full story, and to read their powerful message for yourself.

In today's day and age, children are becoming more and more dependent on technology.

You will seldom find a kid these days who isn't glued to their iPad or cell phone.

Long gone are the days where mother nature was the main source of a child's entertainment...

Instead of rolling around in the mud and playing tag like we used to, twenty-first-century kids are instead opting to stay indoors to play virtual games.

Obviously, this kind of reclusive behavior isn't good for anyone.

Okay, we're all guilty of giving our whining children an iPad in order to keep them quiet for ten minutes...

But many children are developing serious addictions to these devices, and it isn't okay.

And, more often than not...

A child's addiction to technology is simply a result of their parents' behavior.

It's common knowledge that the way parents behave has a huge impact on their children...

And, if they grow up seeing their moms and dads constantly staring at their cell phones or tablets, they will wind up doing the same.

And we're definitely not saying that parents should never go on their phones...

But they should certainly prioritize focusing on their children over scrolling through Instagram. Just saying.

Anyway, more and more parents are becoming increasingly conscious of their technology use around their kids...

And one daycare center, whose location is currently unknown, has had enough of parents glued to their smartphone.

Juliana Mazurkewicz was picking up her child from the daycare service...

When she spotted a scathing message to all technology-obsessed parents on the front doors.

"GET OFF YOUR PHONE".

The daycare's workers had clearly grown tired of watching parents pick up their children, all while glued to their phones.

So they decided to address the issue themselves.

They wrote: "We have seen children trying to hand their parents their work they completed and the parent is on the phone."

"We have heard a child say 'mommy, mommy, mommy...', and their parent is paying more attention to their phone."

The daycare's scathing message quickly went viral and has since had over 2 million shares. Many agreed with the request, claiming that far too many parents are more concerned over their cell phones these days. However, some disagreed, saying that sometimes parents need to check their phones for their jobs. What do you think?

You can read the full message here.

More and more daycares are going to pretty drastic measures to communicate with their parents... But one may have gone too far after writing on a child in permanent ink.  Keep scrolling for the full story...