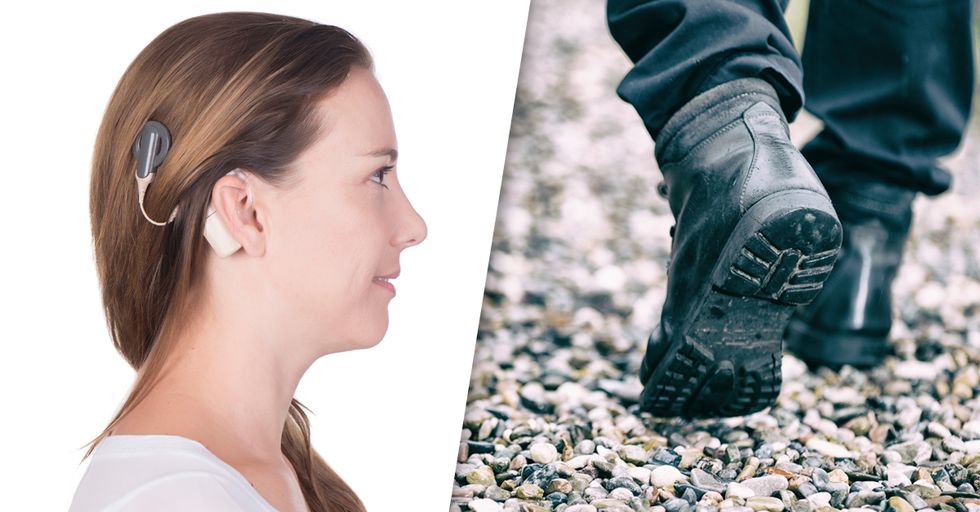 Can you imagine not being able to hear for most of your life, and then suddenly being able to? You'd probably have a lot of questions. Well, this is the case for many people! Because of medical technology, some people who are deaf or hard of hearing have the ability to hear through implants or hearing aids, even if they've never heard anything their whole life. Which, of course, means somethings are a little bit confusing. If you've never heard anything before, you probably wouldn't know for sure what makes sound and what doesn't.

Most people take sound for granted. All the little sounds you hear every day, you almost don't even notice. When was the last time you really listened to your car's blinker? Or the sound of the wind blowing through the trees? For non-hearing people, these things are all brand new, and sometimes shocking.

These people all went from not being able to hear to hearing and they all experienced surprises when it came to experiencing sound for the first time.

It does make sense that the sun should have a noise.

I always assumed the sun had a gentle roar to it, like an engine idling in the background or a distant waterfall. -boilroil

This is kind of lame!

I thought the wind made super loud woosh sounds but it doesn’t so that was lame. -McScrumpy

It must be very confusing to find out all the constant noise hearing people put up with.

I'm pretty hard of hearing, when I got my hearing aids I never knew that air conditioners and fridges made constant noise. -dontfeedtheseagull

One cool thing about hearing aids: you can put the world on mute.

I once wore my hearing aids while at the office. Urgh, I hate all these clicking noises! Every computer-mouse, every keyboard, the pen clicking! I normally wear them only at gatherings, meetings and such, when it‘s important to understand each other. Otherwise, I just enjoy some sweet silence. -Steffchen

Which things that fall from the sky can you hear? We need a list.

Someone I️ know was surprised to hear the sound of gravel as you walk on it. They were also surprised rain has a sound and not snow. -StatickPulse

Oh, hearing people are very aware of this, unfortunately.

When I got my implant, I didn't realize how loud peeing can be... and poops. I turn my implant/aid off when I go into the bathroom, and especially a public bathroom. -DeafLady

Sound can be scary.

I kinda liked thriller horror movies but when I started watching Japanese movie Grudge after I got an implant, I realized I was only getting half of the experience. Example: at the beginning, the ghost boy went across the screen real fast... a bit scary but when I heard the uh... zoom sound when he did that... scared the shit out of me and could not continue watching. -DeafLady

Bugs are loud as hell.

I’m partially deaf and got hearing aids when I was 15. I remember going to my room with my hearing aids in and hearing a cricket for the first time. For some reason, the noise freaked me out so badly I recorded it and showed it to my dad crying because it was freaking me out and the noise wouldn’t stop. -Scrublette

This one made me laugh. The bathroom must be a shocking place for new-to-hearing people.

I screamed when I first heard a toilet flush. -kmw7

My ASL teacher was really surprised that the ocean's waves could sound different depending on the weather/choppiness, and that wind would make a sound as well. She also told us she also assumed that the sunlight would make a different sound hitting asphalt versus grass, only to learn it doesn't at all. (Which, honestly, I think is pretty sensible. You can't see the wind but it makes a sound, why wouldn't the sunlight too?) -plantpet

My wife refused to get hearing aids for years. We bought a house that backs on a four-lane highway. I tolerate noise well. When she came home with her new hearing aids, she went out to the backyard, came back and asked me "WHY DID YOU LET US BUY THIS HOUSE?" -Tall_Mickey

It's usually something like an instrumental version of Genie in a Bottle.

My mom had been hearing impaired for most of her life, with it getting worse as she aged. When she was about 55 she finally got hearing aids. She called me one day to ask if I knew that they played music in the grocery store and to ask how long they’d been doing that. -sarahsuebob

Clocks are loud and rude. Please calm down, clocks.

I have been deaf since I was a baby. I wore hearing aids all my life...when I got a cochlear implant at the age of 40, the one sound I have been unable to get accustomed to is the sound of clocks ticking. The grandfather clock sometimes makes me crazy enough to stop in in action... as well as all the clocks that tick-tock. They’re LOUD! -JellybeansInTX

My grandpa at about 85 finally got hearing aids after many years of declined hearing. He was talking to us on the phone one day and couldn't stop laughing when he told us he forgot how loud his farts could be. He'd just been letting them rip for years, not thinking much of it. My grandma was in the background of the call laughing really hard too. It was so pure. (': -fetalkitty

My friend's sister was very hard of hearing, nearly deaf. She got Cochlear implants. At work, I was asked to help her pair her implants with her new phone (because they are freaking Bluetooth). While I am doing this she is happily telling me how sensitive they are "I can hear paper!" she had no idea paper sliding on paper made a noise. She then told me she could hear her hand sliding on the wall. And how cats annoyed her because sometimes they made a sound, but sometimes they just made the action but no sound.

But then out of the blue, she says "What's weird is, boobs don't make noise, you really think they would..."

Farts: the snowflakes of your butt.

I was really surprised to find out that all farts sound different. No two farts sound the same. -dovah9

It is in the name.

My daughter is hard of hearing. She got her hearing aids when she was 5. She didn’t know that flip-flops make noise when you walk. -amnjm1011

Fireworks would be better this way!

My little sister was born with ear infections and went partially deaf. I distinctly remember we took her to the amusement park after having tubes put in her ears. The fireworks freaked her out. She was still a baby, so I assume they just surprised her, but until then, fireworks were just pretty lights in the sky. -amairoc

Raise your hand if you're not deaf, but you've done this.

When I first got fitted with my hearing aid and was leaving the hospital, I kept spinning to check who was walking behind me. My mum finally informed me that I could hear my own footsteps. I was just expecting them to be a lot less loud. -wolfearedmermaid

It is weird that sharks are silent.

Honestly sharks? If no one has said it yet. I mean I know they don’t roar but virtually no sound is made by them besides the water splashing when they jump out of the water with their mouths gaping. -A86635009

You probably wouldn't expect soda to make noise, and yet...

Bubbles in fizzy drinks, not really sure what I expected but it certainly wasn't a plink-plink tink sort of noise I wasted half an hour, looking for where that sound was coming from on my first night only to be surprised that CO2 bubbling-off made any noise at all.  -ysgyfarnog

This is the cutest one!

I thought cats purring would be as audibly loud as it feels when petting them. -watcherbepartakerbe

In movies and TV shows the mood is almost entirely set by the music. If you watch without the sound, the action is less dramatic. -Ponimama

What a bummer to find out you weren't missing anything with GIFs.

I didn't expect bugs and flies to make such annoying sounds and I also didn't know GIFs were silent. -Jupin210

I had a deaf girl ask me if ice cream made a sound when it melted. -7epizza

Beds are loud, I can agree with that.

I dated a guy in college who didn’t realize the bed made so much noise. The squeaking, creaking sounds of it made it very hard for him to sleep. He ended up having to remove his hearing aids when we slept. -MermaidsHaveWifi

Lol, Nan is too cute.

My nan is pretty deaf but won't wear her hearing aids because "it makes the leaves too loud." -trash-fae

Sorry, this is another cat one but I'M CRYING.

I’ve had hearing aids (severe hearing impairment, not deafness) since I was two or three. My mother bawled her eyes out when I was cuddling our one cat who purred like an obnoxious, rusty motor and I said, “Mommy, what’s that sound? It’s nice." I had never heard a cat purr before. It’s been one of my favorite sounds ever since and puts me to sleep easily. -Elphaba78

After my grandpa got his hearing aids and arrived in his garage at home he walked around the garage for about half an hour because he was sure a bird was hiding somewhere. Then he realized the bird sat in a tree on the other side of the road and the garage window was open. -Jantoine

Not me, but a friend. She was born 90% deaf and was 4-years-old when she first got super powered hearing aids (nowadays in Australia they do hearing checks on babies as standard, but she was born before this was normal). The first time she ever encountered bees after getting her hearing aids she said, “ they’re talking!" Apparently, the sound of bees buzzing is exactly the same as what normal conversation sounded like before she got hearing aids. -dimwittedfox

Whenever I put in my hearing aids, after 16 years, I still get surprised by all the BEEPING SOUNDS. Cash registers. The lights at crossings. People's watches. Buttons on phones. Who started this and why did they want to annoy me so much?! -send_me_rainbows

I love the sound of cicadas, but hearing it for the first time must be overwhelming.

“What a beautiful new world of sound!" cicadas “Put me back." -_Mephostopheles_

Do you ever think about how loud your mouth is?

The mouth is noisy. My teeth were like a xylophone in there when I first had my hearing aids. They click and bump into each other. The tongue is sloppy and makes pops and clicks. I still havent gotten used to this, though its less annoying now. -Narhen

This person was confused by laughing.

I imagined it how it's typically written- Ha Ha Ha! When it's actually this whole spectrum of laughs. High, low, tittering to belly laughs. Just the sheer variety. -Aeshaetter

"My sister had hearing aids as a kid but her level of hearing increased dramatically when she got a cochlear implant at the age of six.

She was in the kitchen and farted incredibly loudly. With a look of abject horror, she turned to my mother and said 'IT MAKES A NOISE!?'' -Quarterwit_85