Dear Trump, I’m From One of One of Those ‘Sh*thole Countries,’ and I Have Some Thoughts | 22 Words 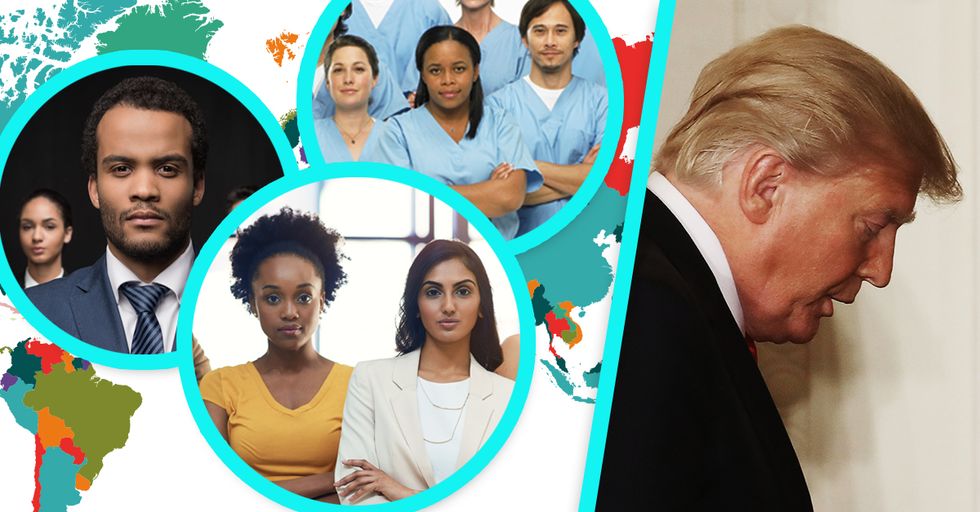 Dear Trump, I’m From One of One of Those ‘Sh*thole Countries,’ and I Have Some Thoughts

That's right, I, the writer of the article you are currently reading, come from one of the many countries Donald Trump dismissed with the wave of a florid hand as a sh*thole.

I'm from Sierra Leone, West Africa, a country you've probably never heard of unless you've watched the film Blood Diamond or were paying attention to last year's Ebola epidemic, in which case you're probably right now thinking – gee, it is a sh*thole.

I'm not going to deny that my home country has problems. It does, just like every other country on this green earth. But I do deny that it is a sh*thole. Sierra Leone may have its issues, but it also has some of the most gorgeous beaches you've ever seen. Also, the food is unparalleled, although you've probably never had the pleasure of tasting it since there are so few of us (Sierra Leoneans) in the United States.
We also have a magnificent history, culture, art, and all those things you don't necessarily think when you think of a West African country. Oh, and we excel.
The average Sierra Leonean immigrant – indeed, the average African immigrant – is more likely to have a bachelor's degree than any other immigrant group. Indeed, Nigerians are the most educated demographic in America period.

@realDonaldTrump I am a Nigerian American, I have two degrees in Mathematics and a third in Electrical Engineering.… https://t.co/OZckKfobPa
— Tosin Ash.💧 (@Tosin Ash.💧)1515720942.0

By and large, African immigrants, particularly the ones that arrive here via the visa lottery program – i.e., the Department of State program that makes a number of visas available to countries with low rates of immigration – tend to become extremely well educated or are already well educated when they arrive.

I'll give you an example. My mother was already a lawyer with her own law firm when she came to America and became a citizen. Because her degrees did not translate, she went back to law school and graduated with degrees from Georgetown and the University of Georgia. Oh, and she opened her own (successful) law firm – again. She's moved back to Sierra Leone, as have most of my family, because she missed it so much.
One of my sisters went to Duke for medical school, the other, Georgia State, and I, a high school valediction, have degrees from Spelman and the University of Southern California. I have also spent most my adult life living and working between Sierra Leone and America, as I love both equally.

I say all this to say that when Africans and other immigrants from other sh*thole countries come here, we do not rest on our laurels. We go out and we achieve – even then, we are discriminated against. Language and cultural barriers, the color of our skin are also impediments to getting jobs. That's why you see so many cab drivers who used to be doctors and surgeons in their home countries.

I am the child of a Nigerian American immigrant and a black American. What trump said is deplorable and at this poi… https://t.co/L4JhfgNrt4
— Layne Bryant Thicc (@Layne Bryant Thicc)1515732903.0

And while African immigrants may not be able to lift themselves out of their straits due to community or financial pressures, they ensure that their children do. I cannot tell you the dismay my family felt when I did not go towards one of the three acceptable paths (lawyer, doctor, engineer).
Despite this, the community impetus towards academic advancement and career achievement, Donald Trump does not think highly of my family and people like me. Instead, he wants more people from Norway. Why? Because they're white.

And that's what this is all about, isn't it? Norwegians are white, the rest of the countries are black and brown, and therefore they don't matter. It doesn't matter how educated we are, that we build our own businesses or that we contribute to the American economy and do our best to integrate. We're black and brown, and to Trump, that's all that matters. But guess what? We're here, and we're thriving, and that's nothing to sniff at.