37 Deleted Celebrity Tweets That Will Live on Forever | 22 Words 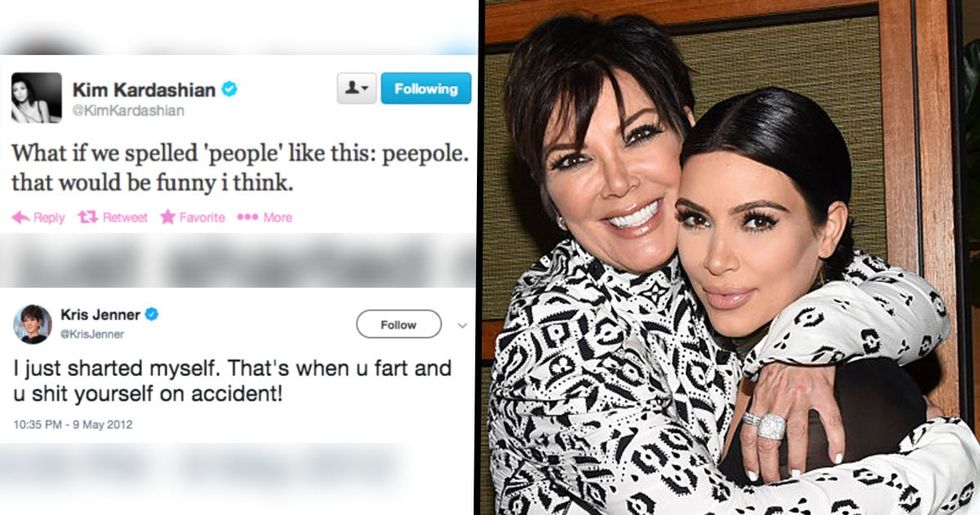 37 Deleted Celebrity Tweets That Will Live on Forever

Ah, celebrities - clearly, they're just like us. Sure, they live in fancier houses and drive fancier cars, but that doesn't mean that they're immune to the embarrassing moments which haunt everyday life. And one area in which they never, ever disappoint? Social media.

You can hit the delete button, but once something's on the internet, it's there forever. And at no point is that truer than when it comes to a social media clanger. Here is our edited list of the most iconic celebrity tweets that they've tried their best to get rid of - but failed miserably. Think of it as a tour through the Twitter archives.

Twitter truly is the gift that keeps on giving.

When you give celebrities an unfiltered means through which to share their thoughts with the world, you're bound to end up with some total gems.

Because, often, celebrities will share something that they probably shouldn't.

And, although they may think that it's easy to undo an internet mistake by hitting that delete button, we all know that this simply isn't the case.

Because once something is on the internet, it's there for ever.

And thanks to some nimble-fingered Twitter screenshotters, we get to laugh at these ridiculous, hilarious, and oftentimes basically inexplicable musings way past their desired internet lifespan. So let's get going, shall we?

When Ashanti asked the big questions.

Hey, it's important to connect with your fans on a human level.

When Jessica Simpson couldn't help herself.

If you ever feeling like tweeting about an elderly man's "bits," let this deleted tweet be a warning to you.

When Lindsay Lohan was confused.

With all the different social media platforms out there, it's easy to get into a muddle - as Lohan proved.

When Martha Stweart kept it simple.

This tweet is truly an enigma (or, let's face it, most likely a mistake).

Or when she seemed to lose the plot.

There's nothing like slamming your hand across the keyboard to signify to the world that you aren't doing the best.

When Jaden Smith got philosophical.

Perhaps going to school does teach some important lessons, though - like not to capitalize every single word in a sentence.

When Joel Osteen got mixed up.

We're assuming he didn't intend this innuendo - but it was absolutely brilliant, nonetheless.

When Aaron Carter made this valuable point.

When we weren't sure what Ryan Lochte was doing.

We can just about interpret a misspelled "rock, paper, scissors," - but why was he tweeting about that anyway?

When Larry King had an exciting life.

We laugh, but we'd probably find this pretty thrilling, too.

When Justin Bieber lost the plot.

We're not even sure what's going on here.

When Kim Kardashian was confused by science.

What's even more worrying is that her mind immediately jumped to murder here.

When Ke$ha was (allegedly) wasted.

And for some reason admitted to using the street as her own personal bathroom.

Although the fact that he paused the "session" in order to tell the world about it leaves us with some questions about the quality.

When Tyra Banks tried to be relatable.

Hey, there's nothing worse than trapped "bobbies," are we right?

When Cher had a moment of self-reflection.

It's the fact she appeared to hit "send tweet" without even a quick spellcheck that truly elevates this to icon status.

When Lil John gave us too much information.

You know things are bad when the only place you can turn to to complain is your (very public) Twitter platform.

When Kevin Durant was suspicious.

Just because you're paranoid doesn't mean they're not after you, after all.

Thanks for the definition, Kris. We'd truly be lost without you.

This was supposed to be an April Fool. Shame it was delayed and didn't go live until the next day, hey?

When Kanye West was super relatable.

We've always said that there's no better way to connect with your audience than by sharing your Persian rug woes with them.

When Mary J. Blige shot herself in the foot.

We hate it when people "understand estimate" our "intelligents" too. Whatever that means, exactly.

When Fergie shared an important message.

We actually think that this one is pretty iconic and deserves to remain undeleted.

When Bebe Rexha had a loose grasp on world history.

We've just got two words for you: Nazi occupation.

When Taylor Swift got creative.

We cannot stress this enough: Do not try this at home.

When Jordyn Woods got salty.

This is one forgotten gem from the whole Kylie-Jordyn-Khloe-Tristan debacle from earlier this year.

When Liam Payne mixed up his words.

Hey, everyone is entitled to their... "onion," we suppose.

When Rita Ora made everyone cringe.

After getting next to no retweets, Ora then claimed that her account had been hacked and that she'd never release music earlier than scheduled.

When Drake Bell got petty.

Although we have to say, our hearts were a little bit broken when Josh Peck didn't invite Drake to his wedding, too.

When Aaron Carter was a brat.

Nothing to endear the general public to you like yelling at your limo driver.

When Solange lost the plot.

We can't even comment on this one, because we have absolutely no idea what's going on here.

Of all the people in the world, you'd think that Don Lemon would be able to avoid petty Twitter drama.

When Kevin Hart got honest.

Although we aren't sure this is much to brag about. Yikes.

When Kanye West shared an insight into his brain.

We can't say we've ever been concerned about claiming ownership of a water bottle, so this is actually pretty illuminating.

And finally, when Michael Caine ... said this.

Whatever you may think you know about Michael Caine, you have to know one thing for sure: He's not locked in an "attick." Got it?? If you're in the mood for more hilarious tweets, just keep scrolling - here are some tweets that are so funny they were liked over 100k times!