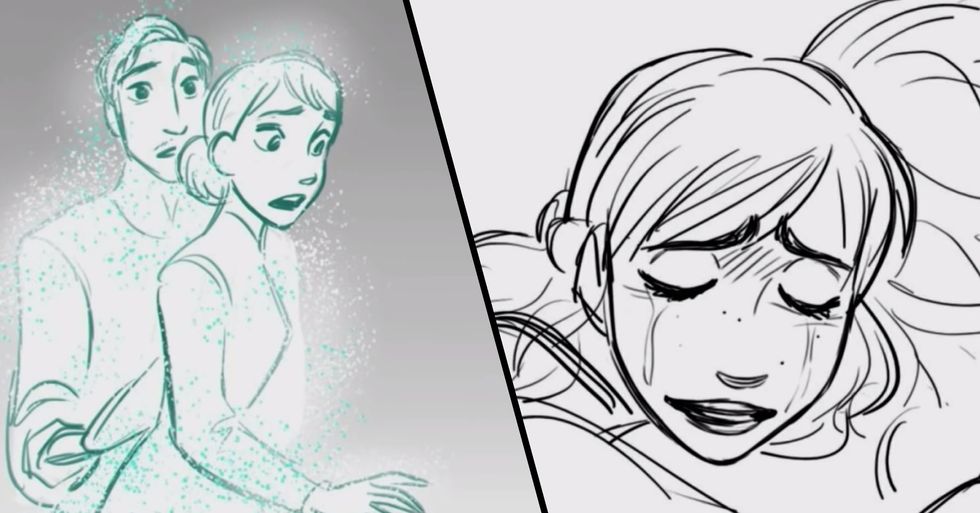 So of course, we were hardly surprised when the long-awaited sequel dropped late last year. But there's still one huge unanswered question that has loomed over the franchise - and it seems one of Frozen 2's deleted scenes answers it...

Scroll on to watch the clip for yourself.

There's no doubt that Frozen 2 has become one of the most anticipated flicks of 2019.

And theatergoers were quick to take to Twitter to air their views too...

Many hailed the sequel as the "best movie of the year," which, let's be honest its a pretty bold statement, but it seems many agree.

But there's one huge unanswered question that still remains...

And it has something to do with Elsa and Anna's parents.

Of course, if we rewind back to the first movie...

We know that King Agnarr and Queen Iduna meet an untimely death in a shipwreck at sea.

But during the movie, it's clear that Anna still has questions about her parents.

And it seems that, during a deleted scene from Frozen 2, Anna finally gets some answers. Keep scrolling for the clip.

In the deleted scene, Elsa decides to help Anna better understand how her parents felt about her...

So, she summons a water memory of them (a newly discovered power revealed in the movie).

The exclusive new scene, titled "A Place of Our Own" was released on YouTube.

One of the directors of Frozen 2, Jennifer Lee, explained: "Anna was struggling so much in earlier versions [of the movie] with 'Did my parents really trust me? Why was I shut out?'" "She still had questions she needed answers for." "We loved this idea that after Ahtohallan, Elsa could give her a memory that would tell her how her parents felt about her," she added.

During the scene, Anna watches as her parents prepare for the journey that would bring about their tragic deaths...

"Darling, I've been thinking," Iduna (voiced by Evan Rachel Wood) tells her husband. "It might be time to tell Anna about Elsa. I can't bear keeping her shut out anymore. She's maturing now. She can be responsible." "It's not Anna I'm worried about," Agnarr (Alfred Molina) says. "What if we let them get close again and the feelings are too much for Elsa? Joy brings her powers out as strongly as fear."

As her parents speak, Anna watches them in tears.

"But if anyone can find a way to help her, it's Anna," Iduna says. "You may be right about that," Agnarr responds. "There's not much that girl can't do." "Her love could hold up the world," Iduna replied. "Lucky for the world," Agnarr says. "OK, we'll tell her when we return."

Anna then tearfully hugs Elsa as the water memory begins to fade away.

"Thank you so much for that," she says.

Fancy seeing for yourself? Check out the clip below.

It's a truly heartwarming scene... we wish it had been included in the movie! Disney is quite clearly on a winning streak right now - not only is Frozen 2 going down a treat but its new streaming service, Disney Plus, is also proving pretty popular. One show, in particular, is attracting attention from fans. Star Wars spin-off, The Mandalorian, is truly standing out from the crowd - and there's one particular character that's stealing the show. Keep scrolling to learn more...